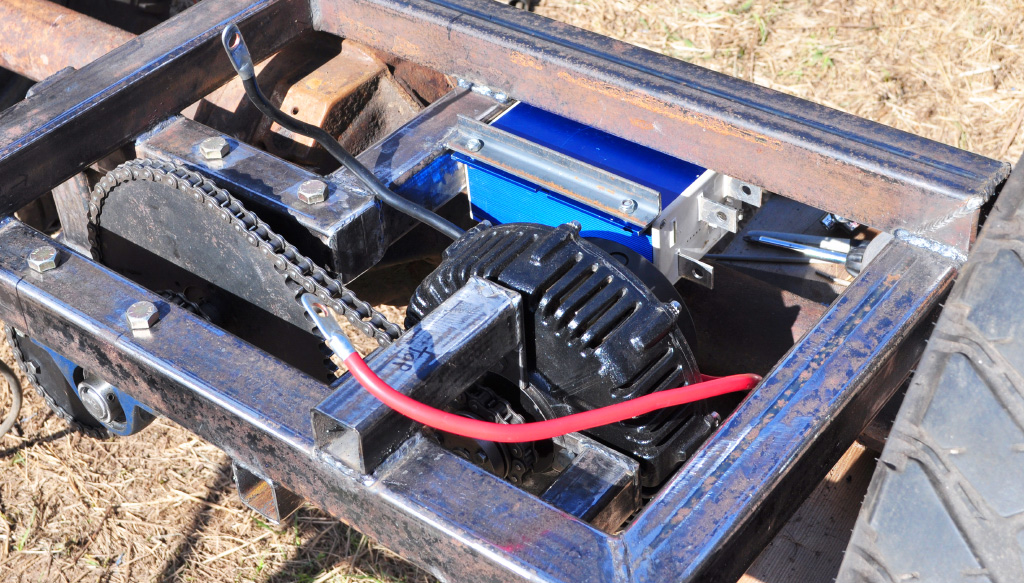 Installing motor wiring and the controller.

While I wait for a day to see if my old lead acid batteries are still good, I took the time to get some of the small work done, such as making the heavy gauge connecting wires and installing mounts to hold the 300 amp motor controller. 300 amps is a lot of power, and although the motor and controller can deliver it, I will almost never require that much. I would expect just driving around with a loaded dump box would draw maybe 10 to 20 amps on the flats, and no more than 50 amps up my steep hill. Of course I will have to connect a chain to the Mule and prove to my neighbors that their expensive ATV is gutless in a tug of war against my machine, so that is where 200+ amps will be required! 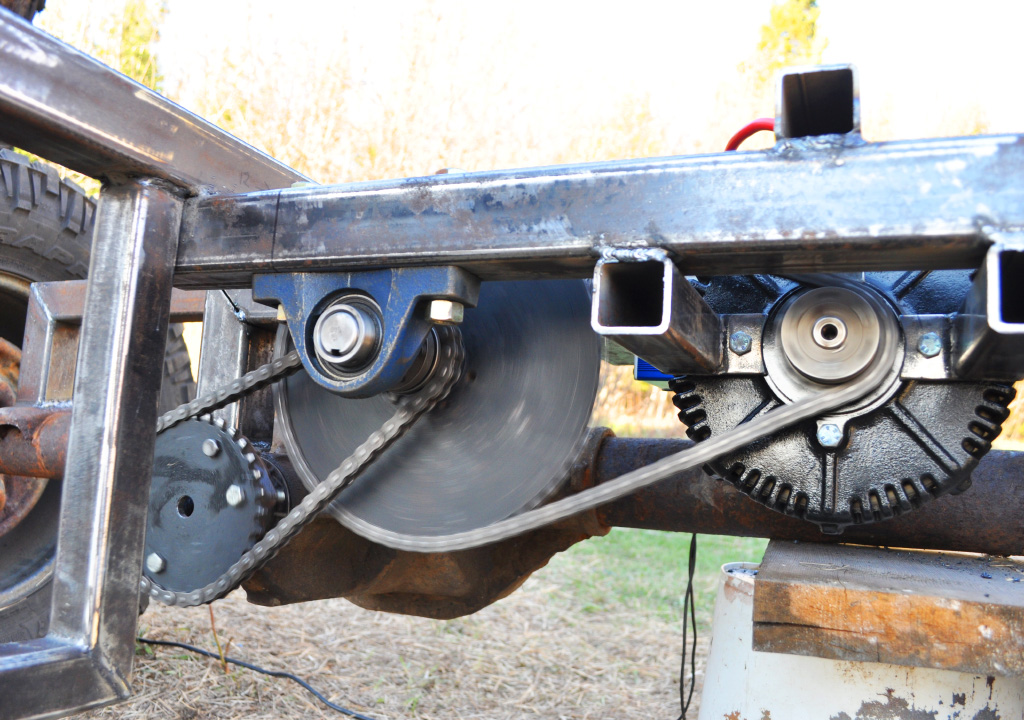 Running up the motor to verify my transmission.

I connected a small 10 amp 12 volt battery charger directly to the motor leads to see what would happen. To my delight, the motor spring into action and turned the single wheel that was raised from the ground at about the RPM I expected. Wait… how could that be correct if you only have 12 volts running the motor when it will be running on 24 volts? Well, the fact is that a differential splits the RPM of both wheels, so with one wheel not moving, the other wheels is rotating at twice the speed as if the vehicle was driving in a straight line. So at 12 volts with one wheel locked, I am getting the expected RPM of both wheels as if running forward normally at 24 volts. Cool, eh?

Also note that you can NEVER directly connect a motor of this size directly to a high capacity power source such as a car battery or you will have an incredible and dangerous surge of instant torque. The wimpy 10 amp battery charge is fine because it just spikes well beyond its capacity and then levels out to about a 4 amp draw once running, which is really good as far as showing how efficient this transmission is. If I was to do the same with a 75 amp hour battery, the lead would probably weld directly to the lead post and it would stress my mechanical mounting system (and chain) well beyond anything expected.

Respect this much power! If this motor ran full up with no ramping, it could snap the chain and whip around so fast that your arm would be cut off like it wasn’t even there. A car battery putting 500 amps directly into this motor is like a typical 4 cylinder car engine running at full throttle, so consider these things when you are messing around with high power electric motors. Just because they are silent does not make them any safer than gas engines, in fact they are more dangerous by far! 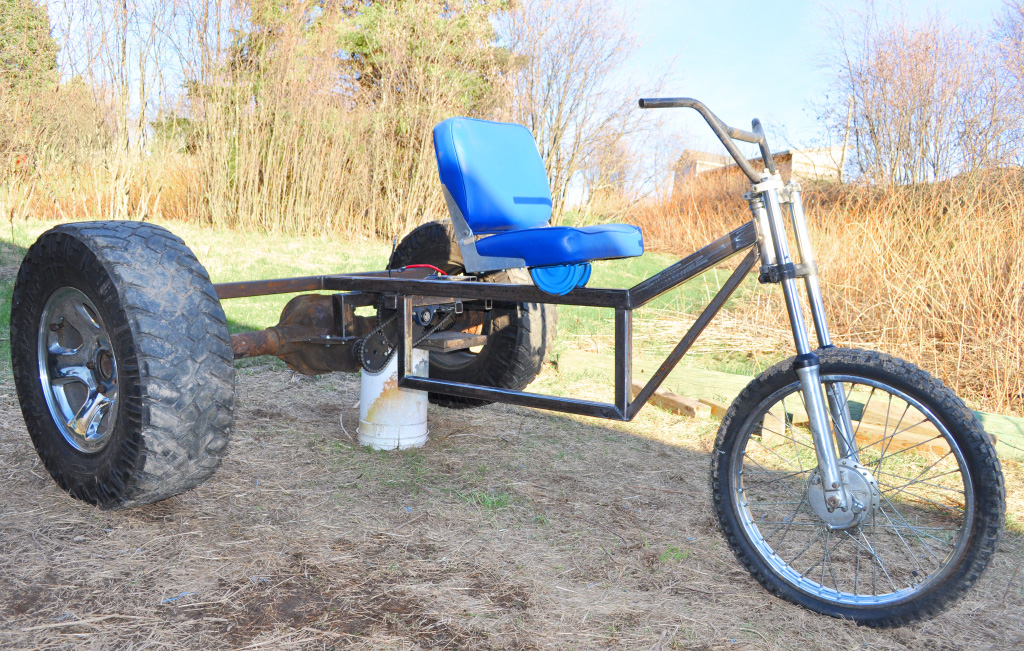 Added the lower frame section to carry the batteries.

The two 60 pound lead acid batteries will be installed lengthwise just under the seat, in the rectangular compartment made from the 1.5 inch square frame section I just added. I left 28 inches of room, which is more than the largest battery I could find, so I will be able to use any selection of battery I choose. The batteries and all of the electrical system will eventually be protected by cowlings I will make from either sheet metal of fiberglass, so they are safe from the elements and so that the final vehicle looks good.

The completed Yard Mule will also feature an amplifier to allow plugging in a phone to play music, a movable headlight, built in AC plugin charging system, and a solar charger that will keep batteries topped up on a sunny day. For now though, I must get the batteries installed so I can test the motor under full 24 volt power with the 300 amp golf car motor controller I just installed. 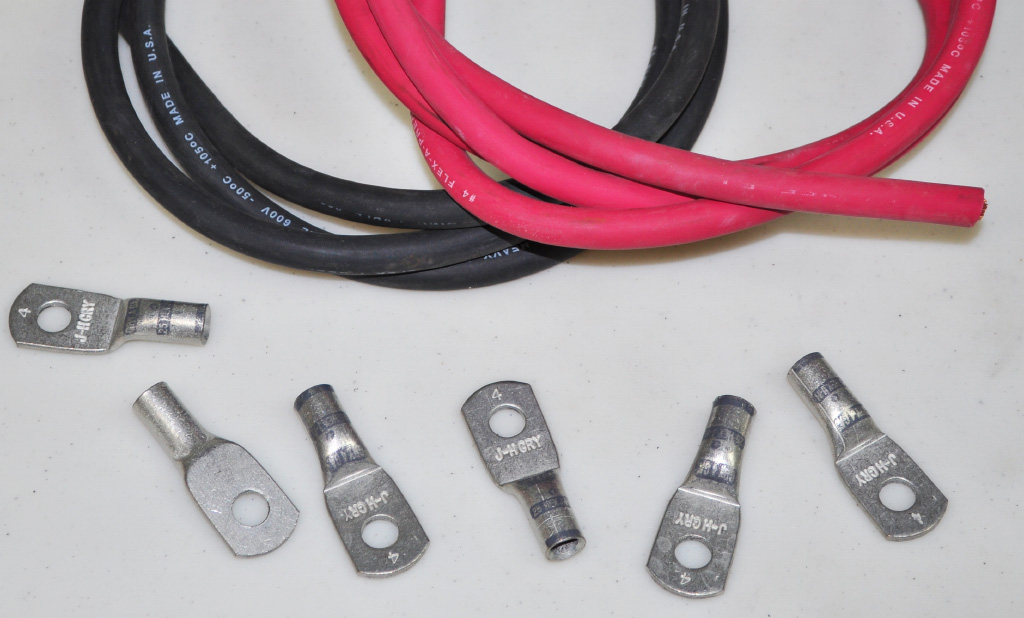 To get the Mule ready for an actual test run, high current capable wiring was required to run from the battery bank, to the motor controller and then to the motor. The motor controller is capable of delivering 300 amps of power, and although this would be considered the maximum short duty load, the cables should be sized appropriately.

I had some lengths of welding duty 4 AWG cable in my parts box as well as these solderable connecting lugs, so I made up enough cable to connect the battery bank, controller, and motor. This is the largest cable that is easy to find, and if for some reason I find I need more current carrying capacity, I will just double them up in parallel. 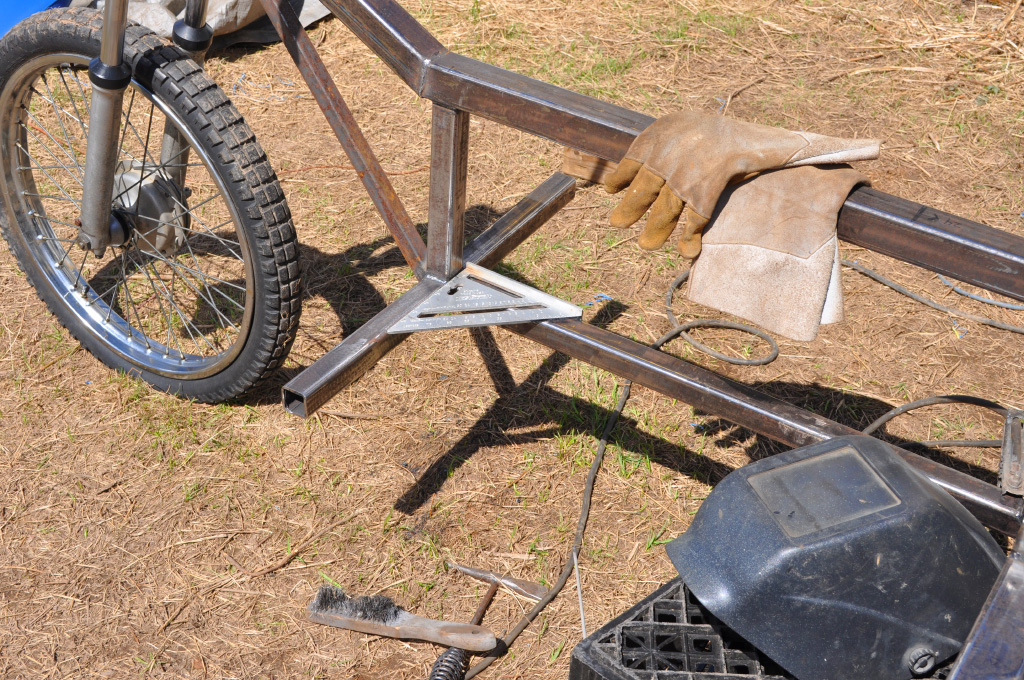 Adding foot pegs to the frame.

The final design will have a running board platform to step up on and rest your feet, but for now I just welded on the 2 front support tubes, which will serve the purpose of foot pegs for my initial test run. These tubes will also support the temporary battery pack frame I need to hold the dual lead acid batteries I have for test purposes. 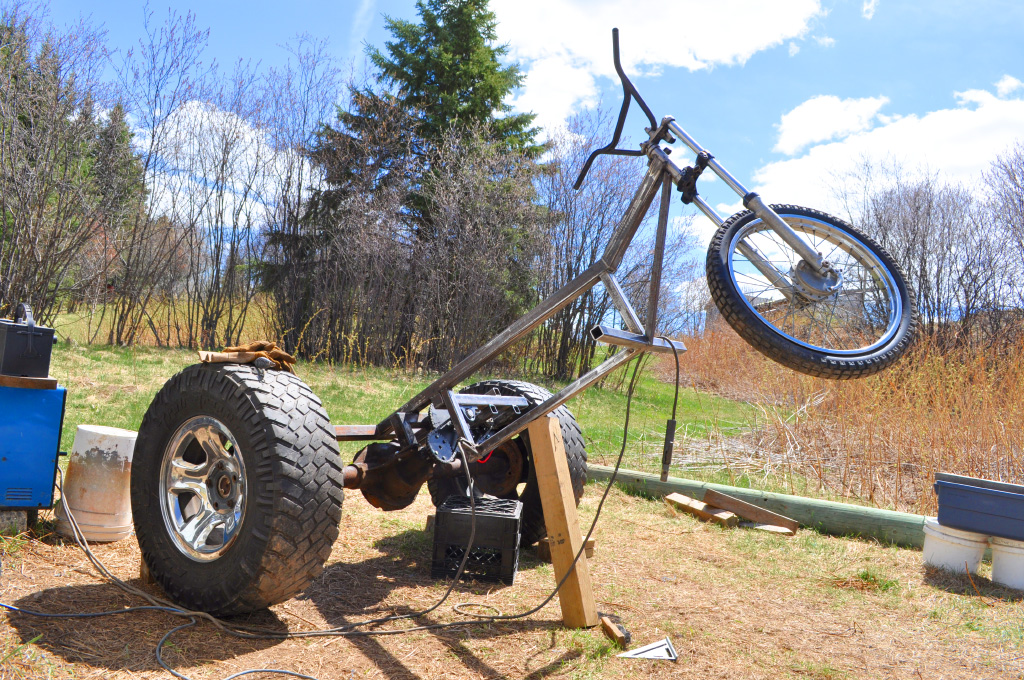 Welding the underside of the frame.

Now that this beast is starting to weight a lot more, I have to find creative ways to get access to the parts of the frame that need to be welded. A few 4×4’s and some blocking of the wheels allows me to get to the underside welds, although it’s not the most comfortable way to weld. The good thing about welding like this is that you become well aware of grass fires that start, since you are kneeling in the flames! 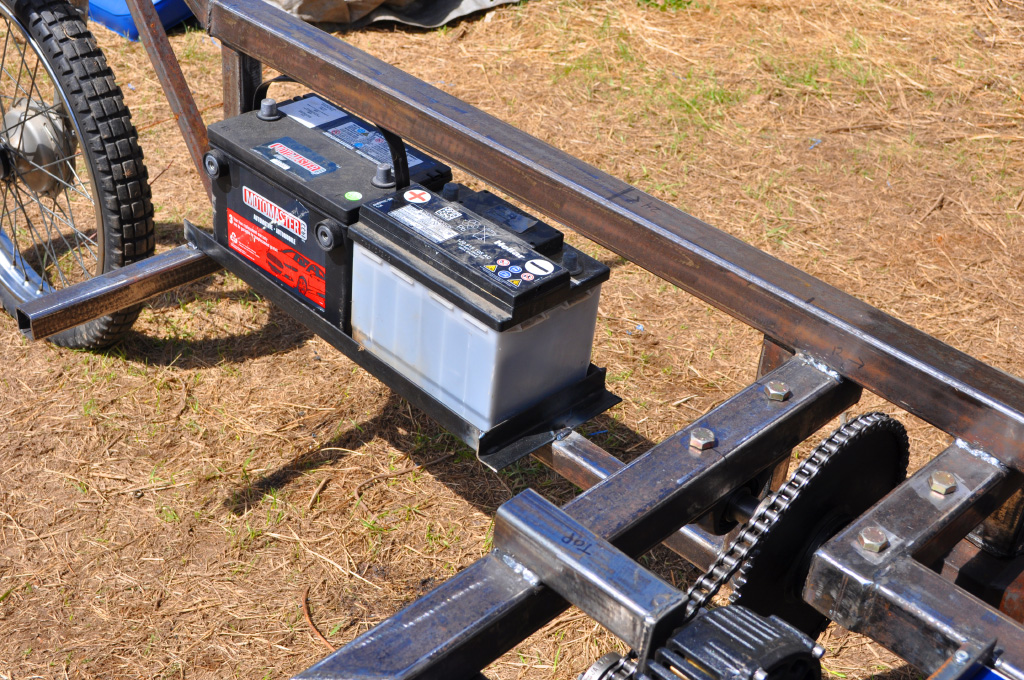 Although these old lead acid car batteries are only half good, they have more than enough current to run the Mule for a few hours. I found an old steel bed frame, and cut it up to make a temporary battery pack holder, which was then welded to the frame. The final battery cage will be fully adjustable, and also include a weatherproof top cover to keep everything out of the elements. 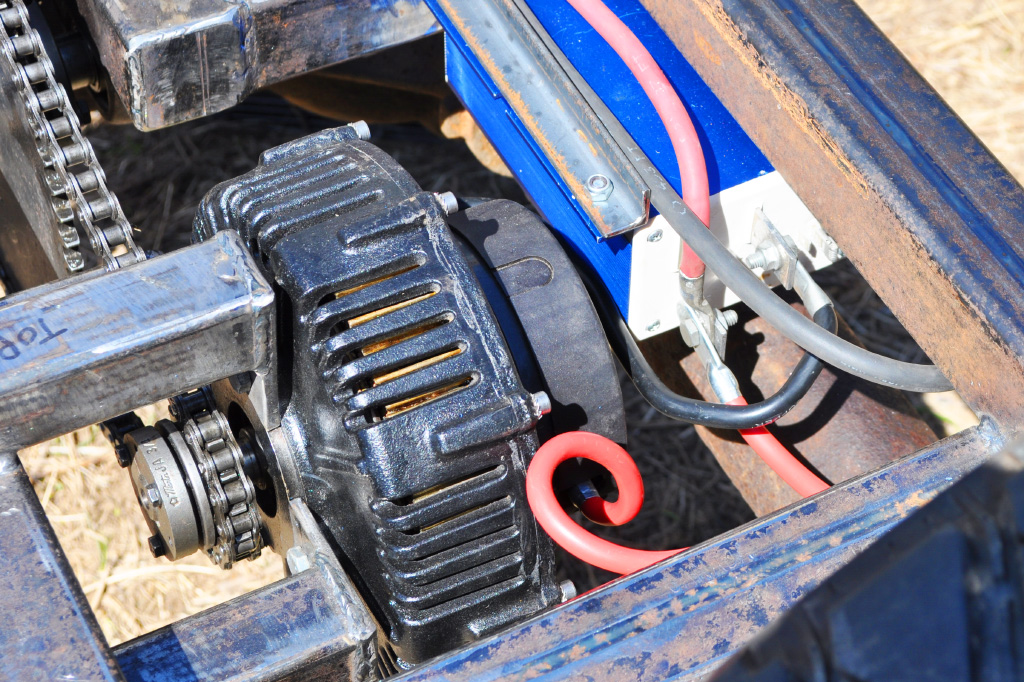 Wiring the motor and controller.

The motor controller is now fully configured to run, with high amperage cables connecting the battery bank to the controller and then to the motor. The throttle is also connected, but since it is nothing but a potentiometer, it has small gauge wire connecting it to the motor controller. The Yard Mule drive system is now fully functional, and should be capable of at least Warp-6, Captain! 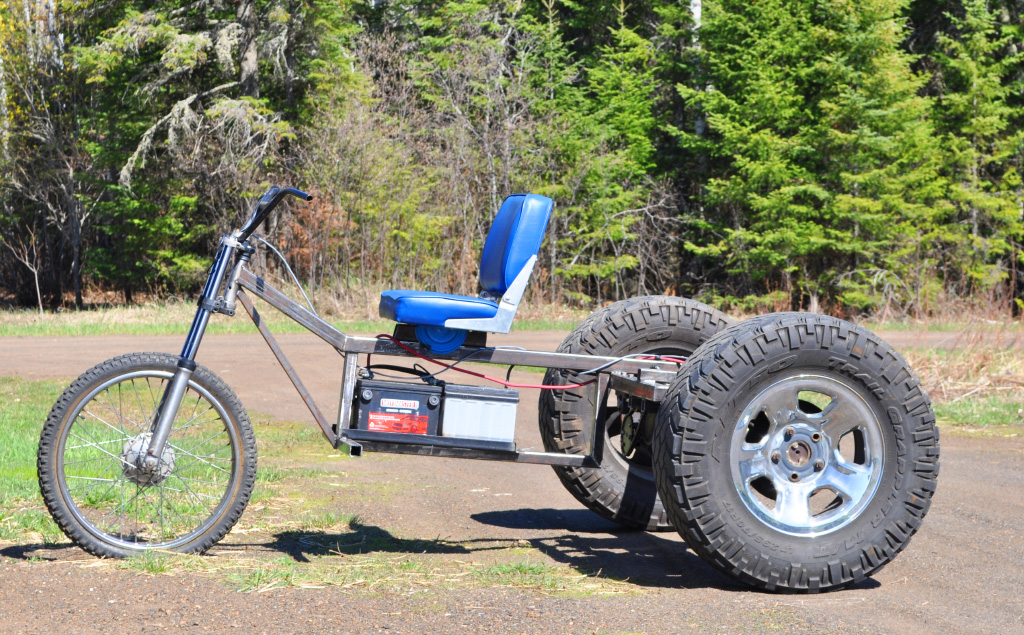 It sure isn’t pretty yet, but it is ready for a test run.  The batteries are half dead, the front tire is completely flat, there are no bearings in the head tube, half the frame is only tack welded, and the seat is just clamped to the frame… sounds about right for a test ride! On the bright side, the yard Mule is only capable of walking speed, and if the wiring catches fire, I can just jump and roll. Let’s go! 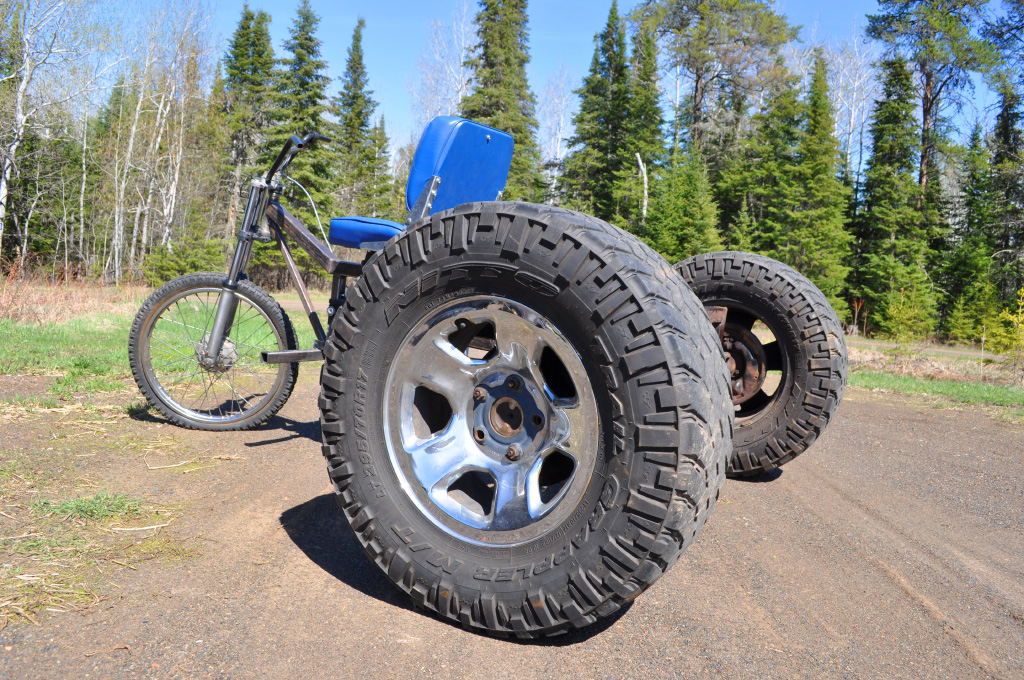 The Yard Mule test run was a success!

As you can see in the video, everything ran perfectly, and I even took the Mule down the road a few miles to the neighbors place and back. The Mule had loads of power and didn’t even slow down when I drove through tall grass, up huge hills, over my wood pile, and even through the boggy parts of the yard near the creek. After a full half hour of running up and down hills, I checked the motor and controller for heat, and there were no warmer than when I started. No doubt, this beast will be capable of some serious pulling and hauling when it is completed.

Now the second stage of the build will begin, which involves making a 32 cubic foot dump box and then completing all welds and accessory systems. The entire vehicle will then be completely pulled apart for painting, new bolts and lubrication of all transmission systems. I would say I am half done now.