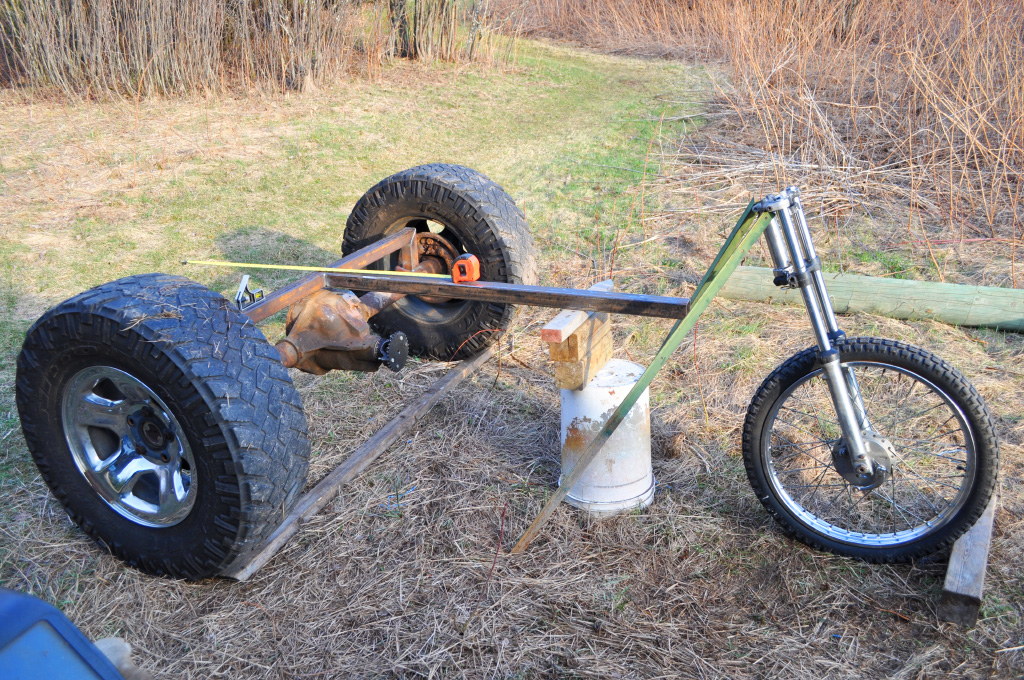 Here, I have installed the base frame, which is the backbone of the vehicle. This part of the frame does several jobs such as holding the differential housing parallel to the ground, supporting the hinges for the dump box, and holding the front boom that will carry the rider, battery pack, and finally the head tube. Dimensions will be supplied in the plan, at this point I am still working out what is best. 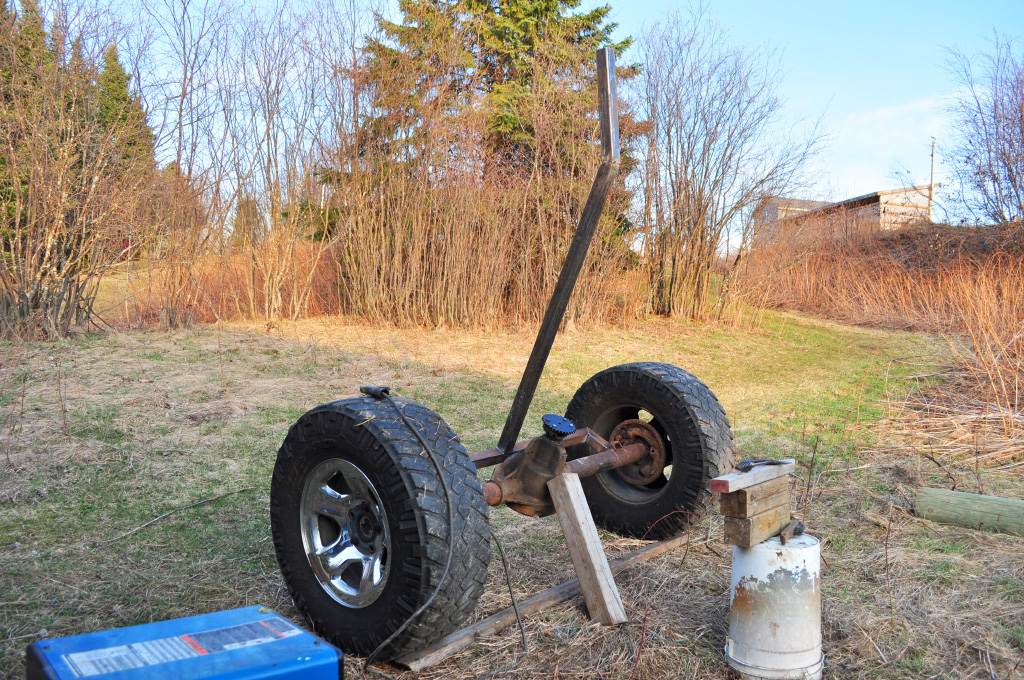 I work outside on the side of a hill, so leveling things up is sometimes a challenge. I know that in one direction the ground is level, so I rotate the vehicle as I work and use a bubble level to check alignments. Here, I am welding the front tube that joins the head tube to the main boom, and have to do it in place, welding overhead. Even at this stage, I cannot possible life the vehicle, or move it onto my 8×8 shack, so it is being built right where it sits.

One thing I have learned from welding on a dry grass hill in the spring is that you best be lifting your helmet every few seconds so you can stamp out those grass fires! 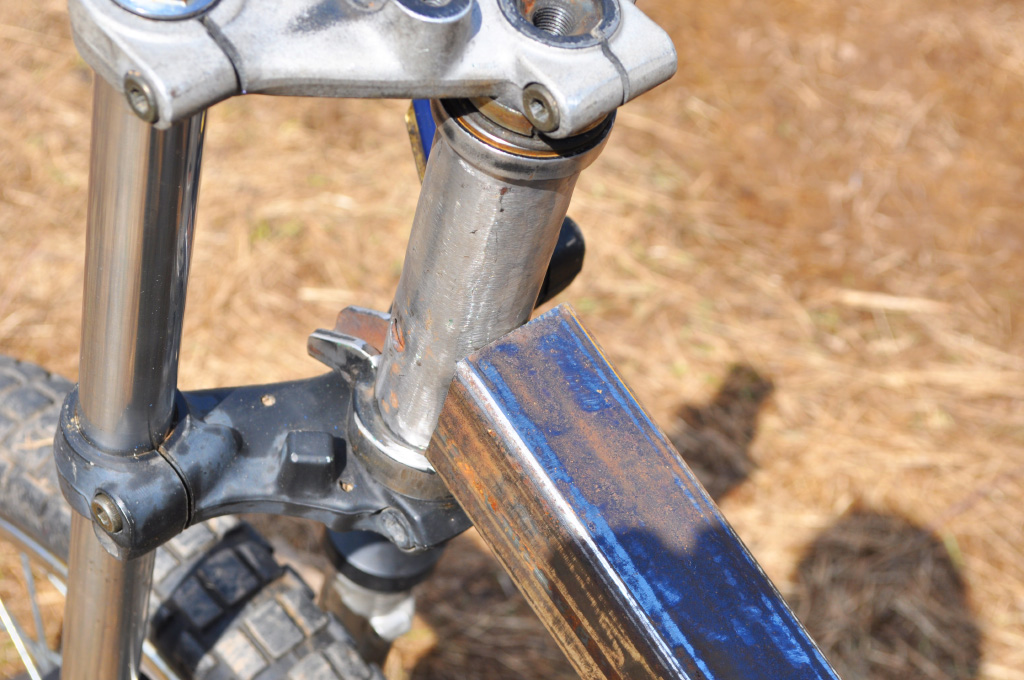 Ready to cut the fishmouth.

Once I worked out the head tube angle, I marked the top and bottom of the front tube so that the fishmouth cut could be made. For a tutorial on fish mouth cutting, check out our tutorials page. 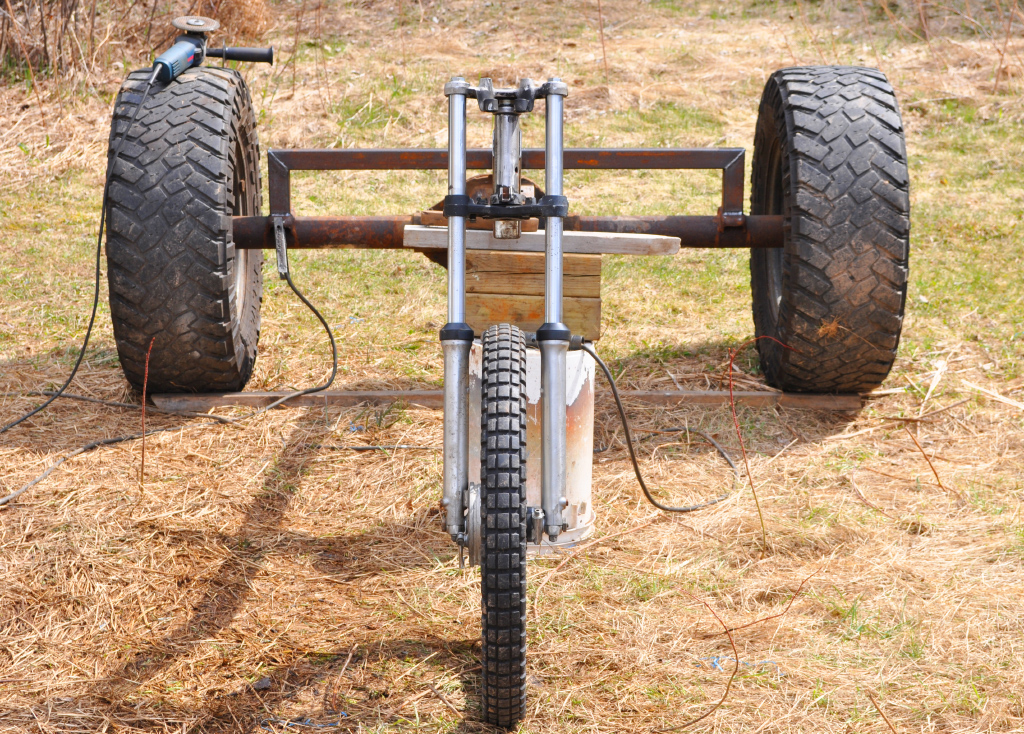 The head tube must be aligned so that the front forks are standing vertical like the rear wheels. I have been doing this for so long that I can get this right just be looking, but if you don’t yet trust your eye, just measure from corner to corner from the front axle to the farthest rear point on your frame. Both sides should be the same, forming a triangle. 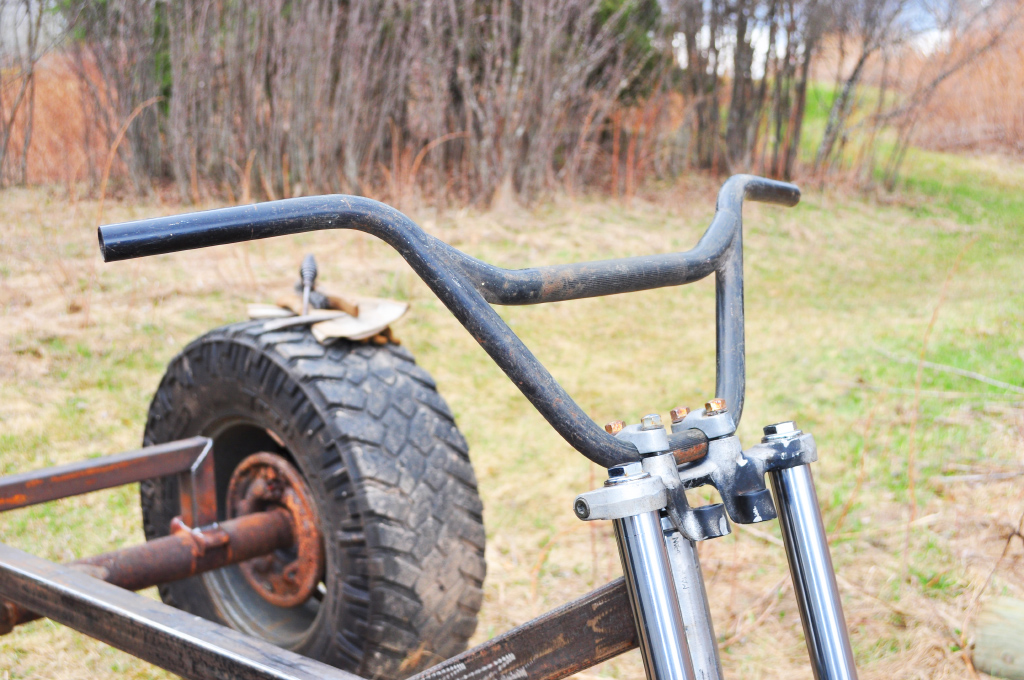 The original motorbike handlebars were bent, so I installed these BMX bicycle handlebars instead. These work well and have the same diameter as the moto bars to the brake lever will fit. The electric throttle will also fit on these handlebars, so everything is working out well so far. I now have a rolling frame that can be easily moved around the yard while I work on it. 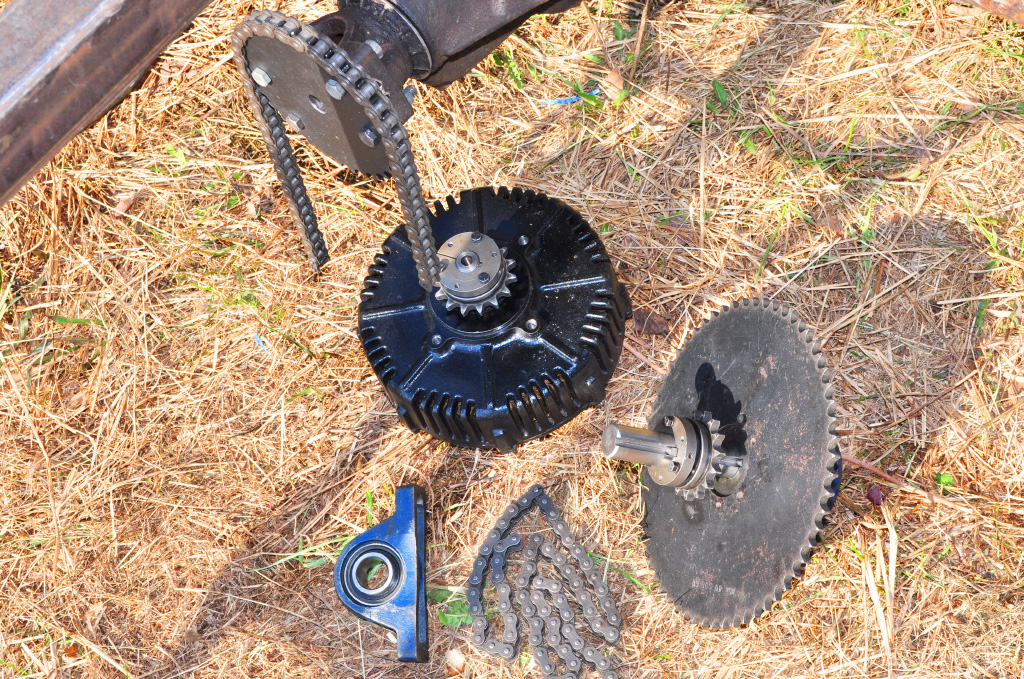 Figuring out the gear reduction.

My goal is unstoppable tank-like power, but low speed so that I can climb massive hills with a ton of dirt or logs and even drag full trees and rocks out of the bush. I had my neighbors come over with the expensive ATVs on several occasions to help do these tasks and from what I observed was that an ATV is not really that good at doing heavy work. The problem is that it is an all-around vehicle, capable of high speed travel as well as low speed, but really lacks in towing capacity. I watched this brand new machine struggle with a 500 pound rock, bucking and screaming as it ripped up my lawn, and it was at that point when I realized that an ATV would just be an expensive toy for what I wanted to do.

I will trade speed for power.

By installing a jackshaft, I can multiply the 3.5 gear reduction of the truck differential by whatever I want, creating a vehicle that could out pull a string of 10 ATVs if I wanted, and could do it with a motor that has only a fraction of the horsepower. With the proper gear reduction, you could make a hairdryer motor pull a house off its foundation, although at the expense if it taking several days to achieve. In my case, I would settle for a brisk walking speed and enough torque to drag a 500 pound rock with ease, or move a ton of gravel up my steep hill without working the motor. I have it all worked out now! 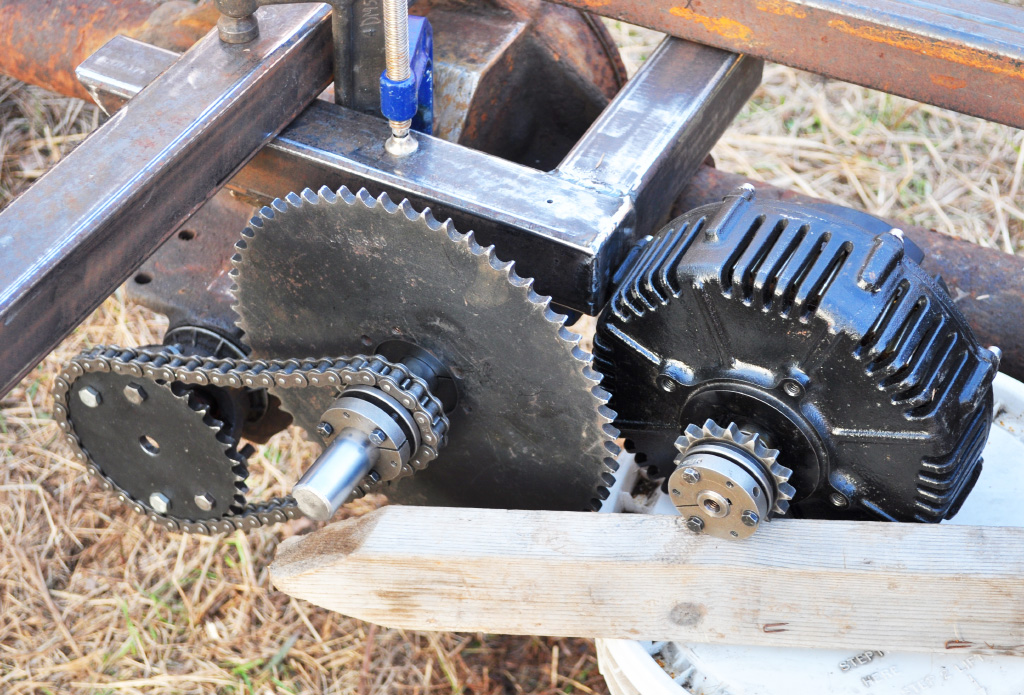 Positioning of the jackshaft.

To keep all of the moving parts off the ground and safely under the dump box, I mocked everything up to make sure there would be enough room. The motor and jackshaft easily fit on one side of the differential as shown here, and I even left plenty of room for a sprocket change if I ever wanted to alter the gear ratio in either direction. Shown here is a 30:1 total gear reduction from motor to wheels, which should offer a resulting 5 MPH full speed and almost endless pulling capacity. 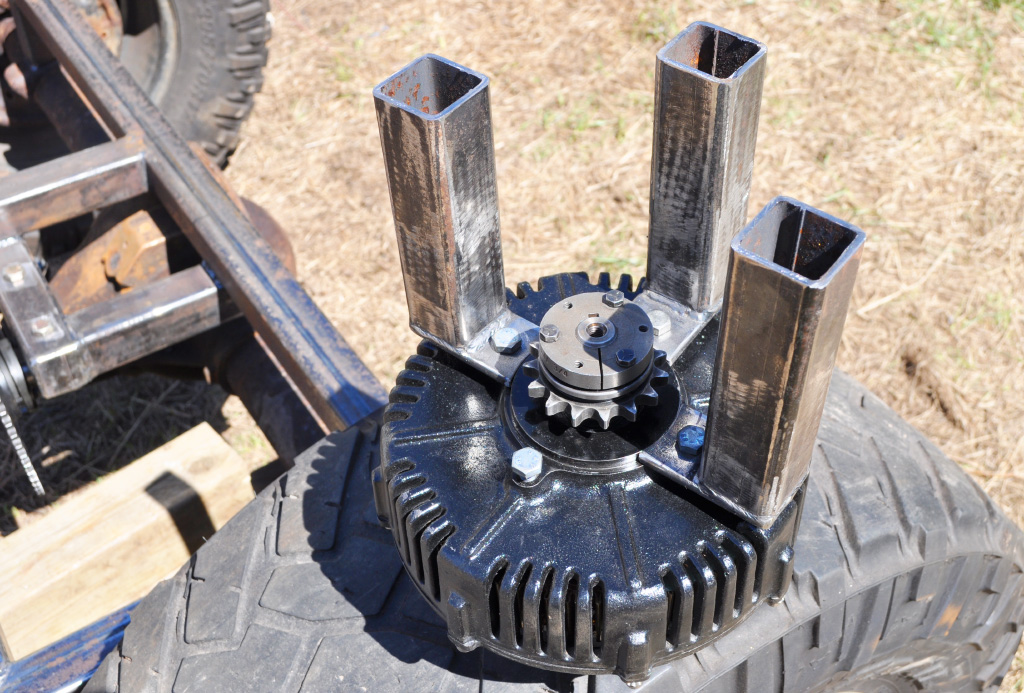 Most builders go for a plate style motor mounting, but that would require having a piece of quarter inch thick plate cut at a machine shop, and that just isn’t my style. Also, I wanted to be able to easily swap out the motor if for some reason I needed to change it for another size or style later on. My solution to a motor mount was to make standoffs from 1.5 inch square tubing and then weld tabs to the end to capture the motor. I am using 3 bolts right now, and will probably add a fourth later. 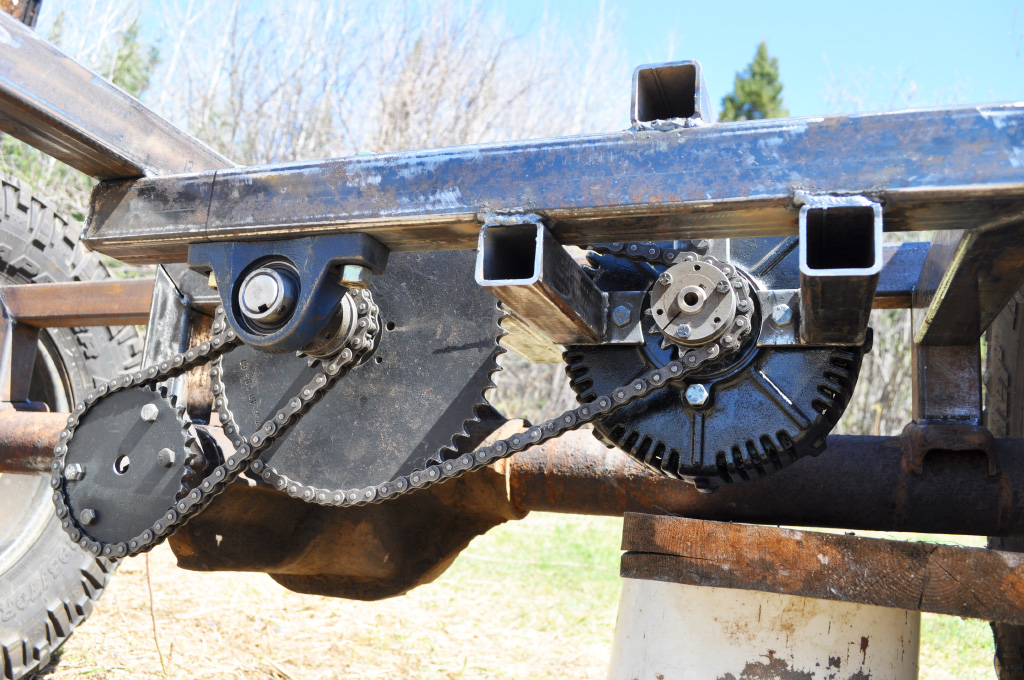 Installing the motor on the frame.

Well what do you know, that spacing of the motor bolt pattern was exactly the correct size to place the three standoffs directly on the 2 inch frame tubing.  Fluke, or good planning? You decide!

The chains were cut and joined to the correct length so I could do some basic testing on the transmission. There is some ability to adjust the pillow block bearings, and I will also include an idler sprocket on the slack side of the motor dive chain to keep things tight. This will be discussed in detail on the actual DIY Plan. For now, let’s just keep to the basics and keep on building this beast! 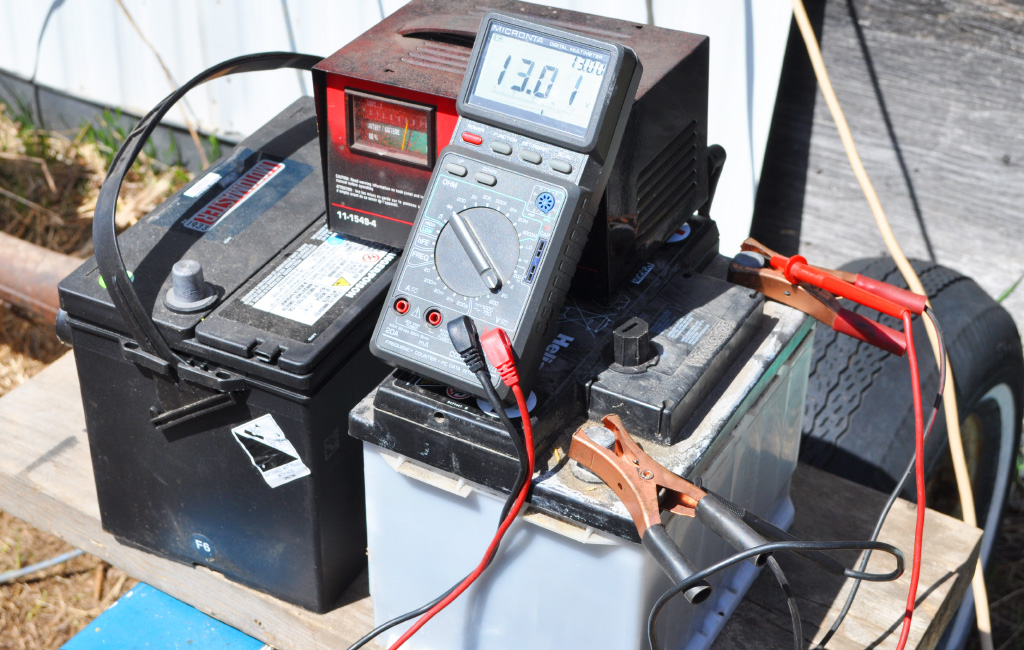 Charging up some old automotive batteries.

Although this motor is capable of running up to 72 volts, I decided to keep things simple and less expensive by running it at its minimum (and most efficient) rating of 24 volts. 24 volts gives the motor a top speed 0f 1000 RPM, which I used in my calculations of the jackshaft gear reduction and final travel speed, more nerdy details I will leave for the Plan.

I intent to purchase a pair of new Optima Yellow Top batteries as these seem to be the top choice for electric vehicle conversion. They are not cheap batteries, but a hell of a lot less expensive than lithium, so until the price of lithium batteries in the 75 amp hour range fall below the cost of a new Ferrari, I am sticking to old fashioned lead acid batteries. These two batteries were just laying around my place as backups for starting the vehicles on -50 degree days, so I am charging them up in hopes they are still good enough to produce at least 20 volts or better when placed in series.

What is interesting about this build is that weight is of no concern whatsoever, in fact more total weight just means more traction when trying to tow something heavy. Lead acid batteries are very heavy, so these will do well to keep some weight in the front end so that the vehicle will not tip when dumping or loading something heavy in the cargo box without a rider’s weight in the seat. The weight of a pair of 75 amp hour batteries is 120 pounds, and this is just fine.