A FUN TWO-HEADED WINTER READY TRIKE THAT YOU CAN MAKE FROM SCRAP BIKES. 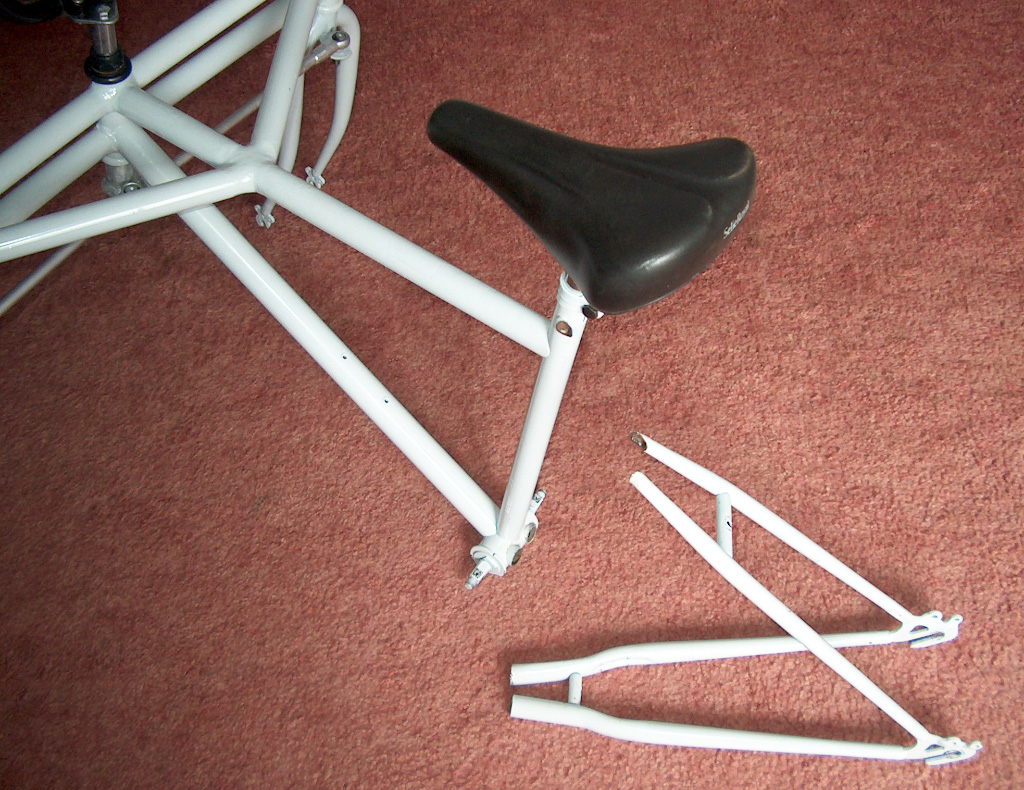 Chopping the rear from the original trike.

This project is a modification of The HammerHead Winter Trike as shown in this Tutorial.

Once the Hammerhead project was completed, I realized that I had created a very functional and fun winter vehicle. We’d go to outdoor hockey rinks, or icy parking lots, take turns spinning out, and doing all sorts of fancy maneuvers on this almost unstoppable machine. We even tied a sled to the seat post and pulled each other around. This worked surprisingly well wherever there was a decent layer of snow.

Although I could find no fault at all in the trike’s design and handling characteristics, I thought that there was one thing I wanted — another trike!

Now that I could ride all winter long on any surface and in any weather, I had to do so by myself, since none of my usual riding partners had such a hardy machine, and a two-wheeler was no match for the Hammerhead.

Instead of building a complete trike all over again, I decided that it would be more fun to add an extra set of pedals and seat to the existing machine, turning it into a totally unique vehicle — a tandem trike with two front wheels — something you don’t see every day, or any day for that matter. Adding a second bike to the original trike would be easier than making a whole new one, because the front end was the most complicated part to do, and the expansion would require only a minimum of easy to find parts.

I decided to call the new machine, the Snow Bus, since “Hammerhead Tandem” did not sound very cool, and we all know, a cool name is a must for any project. Also, the bike is long like a bus, and when I take it out for solo rides, I can’t get much farther than a block or two before someone asks for a ride, and jumps on the back. The Snow Bus is an extension of the Hammerhead, so obviously you have to make the Hammerhead before continuing with this project.

Now that you have built the Hammerhead, chop off the rear end with a hacksaw, as shown here. After doing a lot of work, now you have to chop it in half!? Even if you were planning to make the Snow Bus right from the beginning, it would still be best to start off with a single passenger trike at first, then cut it up after it was working well. Following this process makes it easier to get things working correctly, especially with such a complex front end. 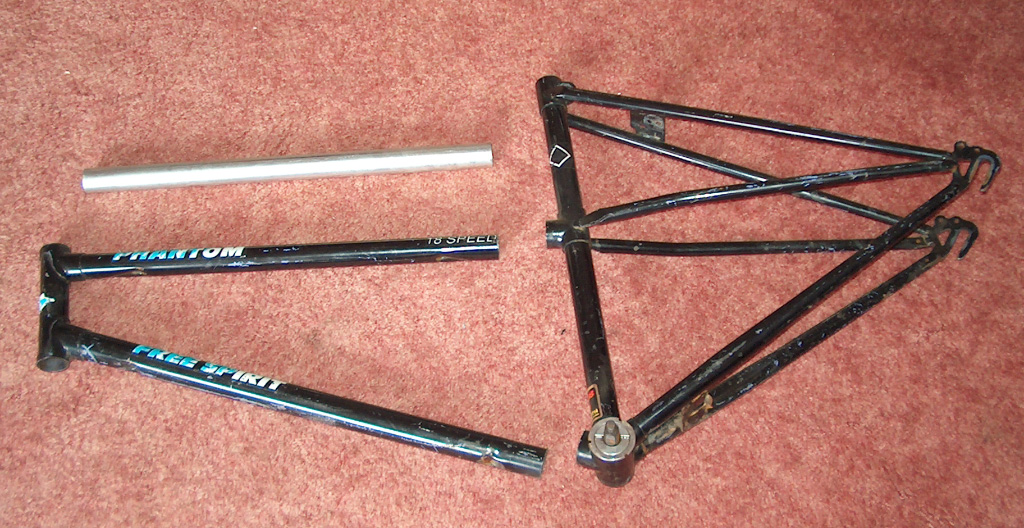 Cutting a front section from a donor frame.

Add the removed rear end to your growing parts pile for later use, and dig out a donor frame to be used as the new rear end and passenger addition. You will be using only the parts on the new frame from the seat tube to the rear drop outs, so if the forks or main tube are bent, no problem, they will be removed anyway. The donor frame does need to meet a few requirements though such as wheel size and general geometry.

If you used a 26” bike and forks for the front of your Hammerhead, make sure your addition also has the same-sized parts, or you will have an odd machine (not that there’s anything normal about it already). Also, the frame height (length of seat tube) needs to be similar to the original, or slightly smaller so that the new top tube will fit between the two seat tubes on each frame.

For my donor frame, I chose a ladies road bike that was the same size and height of the one I used to make the Hammerhead. The advantage of a frame like this is that the lower main tube allows easy access onto the bike for the stoker (the rider who sits at the rear), and follows the general line of the original main tube for a nice looking frame.

The disadvantage of this type of frame is strength.

If the stoker is 6’5” and 230 pounds, you may want to use a heavier men’s style frame. Also, the extra set of stays in between the seat stays and chain stays on my chosen frame are very necessary for strength because a lot of weight will be transferred along both main tubes and into the joint at the rear seat tube.

Once you have chosen a suitable frame, cut the front end off as close to the seat tube as possible and add it to the scrap pile. Take note of the original length of the main tube, as you will need to keep this measurement the same for the new main tube and boom (lower tube that joins the two frames) so the stoker is placed at a reasonable distance on the bike to allow for a comfortable ride. 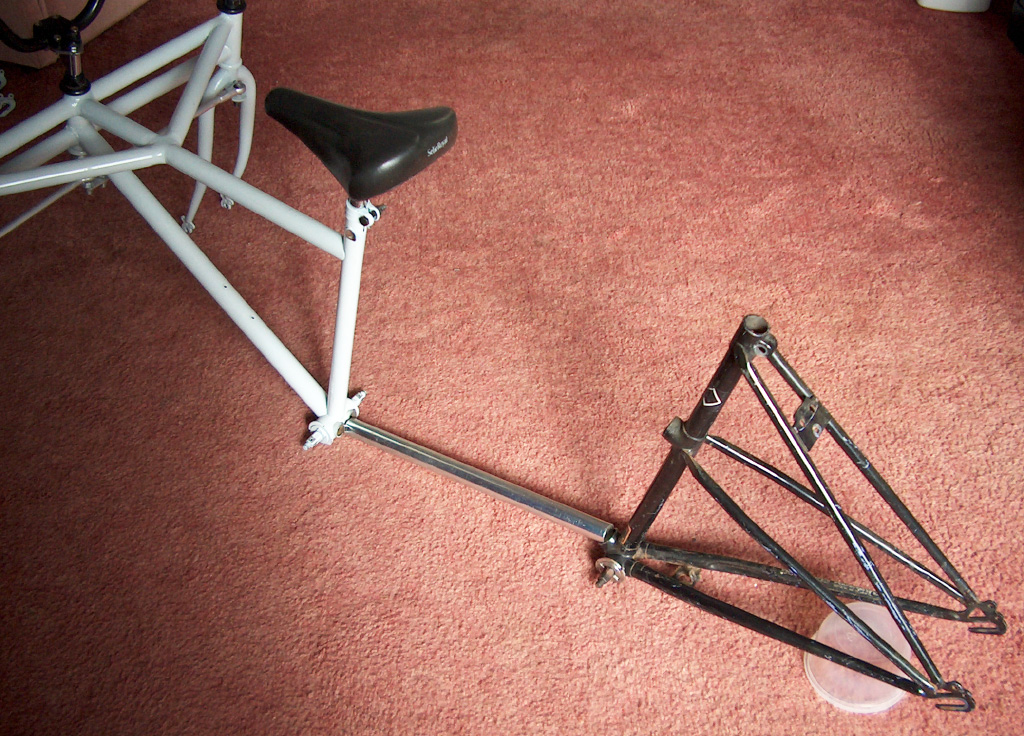 It’s time to cut the tube that will be used as the boom to the correct length. Use the measurement that you took from the donor frames main tube, or measure the main tube on the front frame. Because both seat tubes should be parallel in the end, the boom and main tube will be the same, or very close. The tube I cut was 17”. Before you weld the boom, it’s a good idea to set up the two frame halves so you can get a good idea how the final product should look, as shown in here. Notice the plastic container under the rear dropouts. The front forks are resting on the ground, so the rear dropouts should be elevated, as they would be if a regular bike were placed on the ground with the front forks down.

There is about a 4” distance between the rear dropouts and ground if a frame is resting on the fork tips and bottom bracket. The same distance is needed for this tandem. If you welded the two frames together without this 4” difference, it would still work alright, but the two seat tubes would be at odd angles, and the captain’s frame would be leaning forward. The goal here is to have both seat tubes at the same angle.

Once you have the two frames laid out properly with the new boom resting between them, tack weld the boom at the top on each side then carefully align each frame as straight as possible taking a good look at every angle, front, back, and sides and making slight adjustments without breaking the weld. Both frames need to be as straight as possible in order to end up with proper tracking and chain alignment, so make this one count.

Weld only a little on each side to help prevent warping as you weld the boom in place. Make any adjustments needed after each small weld has cooled, and continue this process until the boom is welded all the way around. Once the boom had been properly welded, clean and grind the welds before moving on. 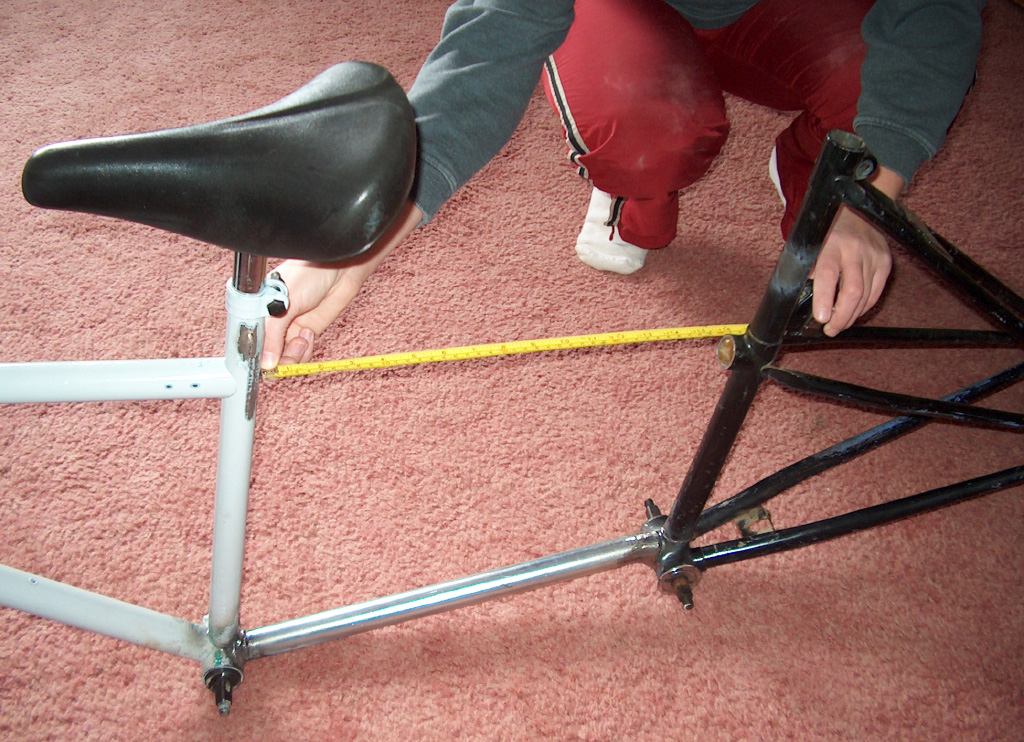 Measuring the length for the top joining tube.

The next tube to be cut and welded will be the new rear top joining tube. This tube should be almost the same length as them boom since both seat tubes are parallel to each other. Take this measurement and add an inch or so for the rounded groove that will be cut at each end to allow for a good fitting joint and cut the tube. I used conduit again for this tube, but any bike tubing will work fine here as well.  Again, make sure both frames are straight before welding in the tube. You can still muscle the vertical alignment with a good swat from a rubber mallet at this stage, but once that new main tube is welded in place, you have to live with any errors, or take out the hacksaw again, so take your time and get it right.

Weld in the rear main tube using the same method as the boom, taking care to control the heat and avoid warping. Fill all holes and imperfections and grind the welds. There’s only one more tube to weld before you have a completed frame. 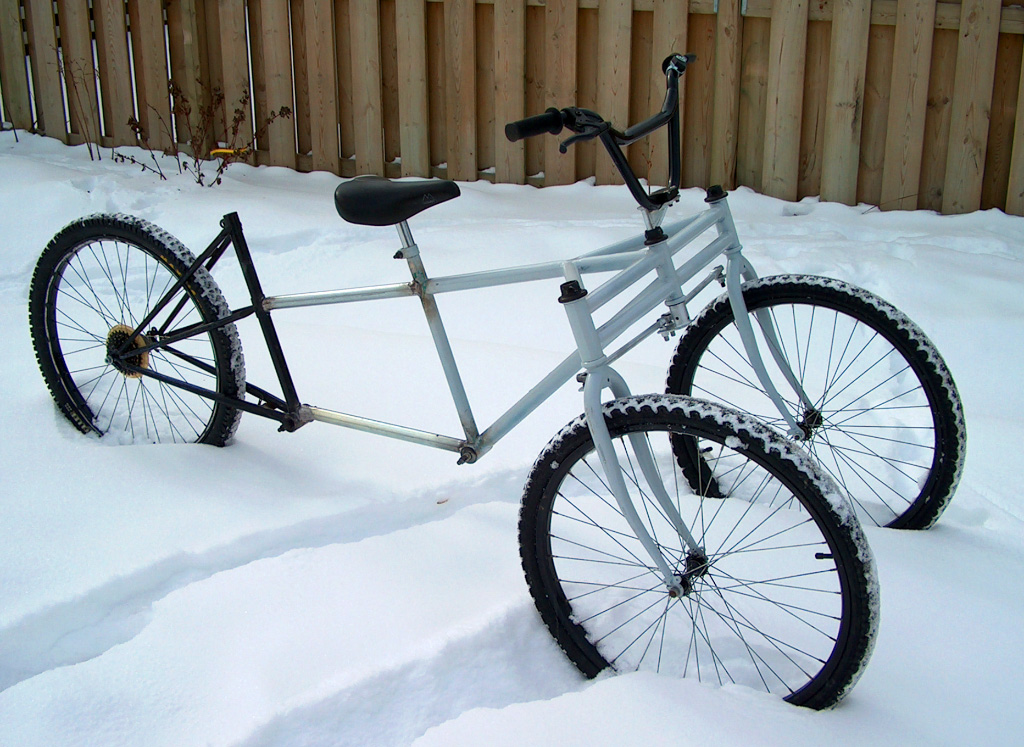 Checking the alignment with the wheels installed.

Now that both halves of the frame are welded together, it’s a good idea to make sure that there are no serious alignment problems. Put all three wheels back on the trike, and have a good look at it from all angles, especially from the rear. The two seat tubes should look parallel from the side, and should be in perfect alignment from the back. Also, the two bottom brackets should be parallel when viewed from the top.

If one of the bottom brackets is way off, the chain may not stay on due to alignment problems. Do not be tempted to sit on the bike yet, as the frame is not ready to support any real weight. The problem is that the square formed from the two seat tubes, rear main tube and boom is not structurally strong, and it needs to be altered before it can hold any weight.