You might recall that I had no access to a workshop and had started making a mid-drive using a bottom bracket to have an output sprocket at each end and a cassette on the right end to take chain drive from the pedals. It had to be possible to disassemble the module for maintenance.

Simply put, the left and right output sprockets are made from two 28t chainrings and chainring spiders. The left one is secured to the left spindle square taper with what was the left pedal arm securing bolt. The right side, although made the same way, is part of an assembly which includes the cassette. 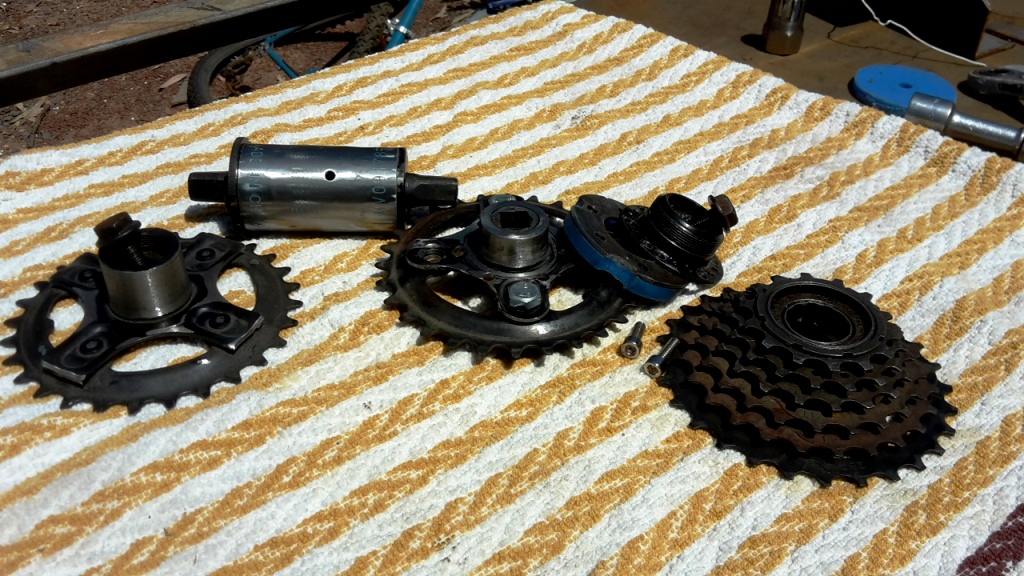 These are the components of the mid-drive.

The axle was removed from a rear wheel hub and the ball bearings discarded. The hub was then modified (butchered?) by cutting it just inside the right side spoke flange, releasing the spoke flange and cassette mounting. A little attention with a file and the spoke flange fitted over the previously ground down pedal arm remains with the hub bearing cup pressing against the bottom bracket spindle end. This made it possible to secure it to the spindle with the original chainring securing bolt tightened against the hub bearing cup. 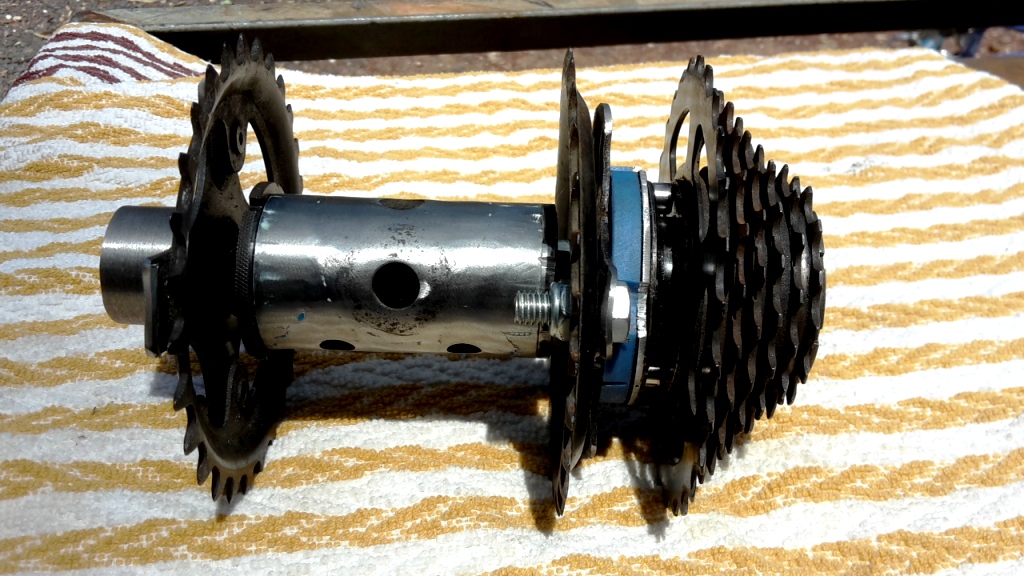 The assembled mid-drive. Some of the bolts are missing and will be installed with the final fitting.

A spacer (blue) was made to fill the gap between the chainring spider and the spoke flange. Bolts through the spoke flange, spacer, and chainring spider secure them together, allowing the driven cassette to turn the bottom bracket spindle to provide drive to the rear wheels. Mounting the completed mid-drive will be easy but the rear axles will be a little more difficult.
Kevin - VK3CKC
https://groups.io/g/pedalradio
https://axerail.coffeecup.com/index.html
https://www.youtube.com/channel/UCP_NWH_v3GVKW-IDYVWgtWA

I have been busy with much testing and re-arranging various electronic gizmology on my Warrior. Haven’t been riding though. Spent weeks with connections and re-wiring, etc., in preparation for this year’s O’Keefe Marathon (April 30 and May 2). You might recall that I do the planning for a team of amateur radio operators for course communications and provide the Tail End Charlie role – and I almost made it. I came down with a bout of ‘flu in the week before the event and couldn’t ride. I’ve never been so sick. Found some good drugs though and managed to ensure that the plan still worked.

eLecTricks Delta has been waiting patiently for me to get back into it with a few plan changes. The mid-drive will be changed. All that previous work is not a complete loss but the left side will not be required. Also, I will be making a freewheel differential for the rear axles. I couldn’t locate freewheel adaptors in Australia and did not want to pay International freight. I did locally source some 5/8” collars to which I can weld a threaded part to take freewheels which are readily available here. Everything else should be easy. I had also arranged for some lathe work at a local Mensshed but things are now delayed since the Government decided to place Victoria into a 7-day Covid Circuit Breaker lockdown – only allowed out for essentials, Covid vaccination, exercise and maximum 5km radius. Seems like some overseas travellers have brought more than their carry-on luggage with them. Anyway, a differential is the next part of construction and a Google search for “Savarin Freewheel Differential” will bring up many images of what I have in mind.
Kevin - VK3CKC
https://groups.io/g/pedalradio
https://axerail.coffeecup.com/index.html
https://www.youtube.com/channel/UCP_NWH_v3GVKW-IDYVWgtWA
You must log in or register to reply here.
Share:
Facebook Twitter Google+ Reddit Pinterest Tumblr WhatsApp Email Link
Top