I could try some infill though I'm far from convinced it's the joints that do all the drooping. I think a lot of the droop is just pipes bending further forward in the frame as the load is applied at the rear. Your post has got me thinking about removing the suspension at the rear though. That would allow substantial reinforcement directly under the cargo area. That'd mean loosing the ally swing arm and replacing with steel and probably two steel poles directly up from the rear wheel to brace.

Using panniers would also mean loosing the ally swing arm and adding a little steel to form pannier mounts so probably about the same extra weight for both suggestions. Looking like a choice between keeping the cargo area and keeping the suspension. I'd originally put the suspension in for two reasons:-

Point 1 is now irrelevant as the chassis is already a double spar unit having been reinforced early on. I'll have a look at chassis redesign to accommodate no suspension. My initial thought is a complete new chassis from the front axle back would be best. It means throwing away a lot of effort but may be better long term than compromising at this stage. I could bring the rear wheel closer to the body and shorten the rear body overhang to take extra load off matters too. That'd cost a little cargo area but cargo volume is not the current issue - it's cargo mass.
S

Ok don't throw everything away just yet ? it has not turned a wheel yet , maybe after riding it some distance you will have a better idea where it can be improved ? 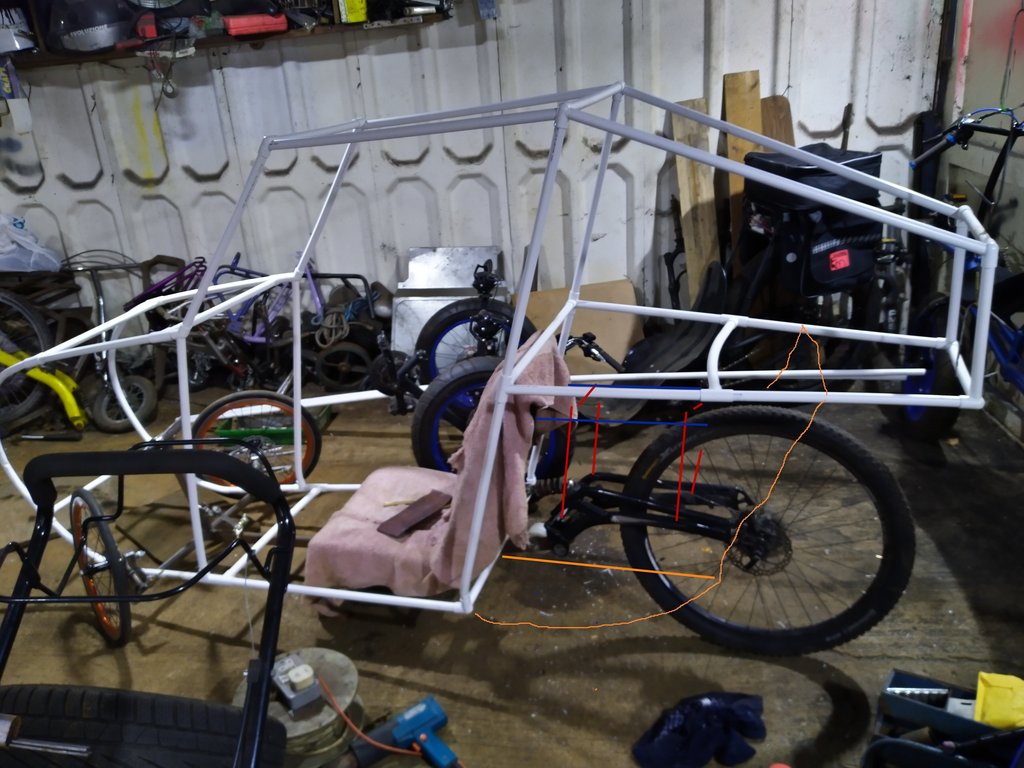 So red lines are a couple of loops that go up and over the rear wheel and are just bolted to the existing ali rear fork [ no drilling the ali it don't like it ] there are gaps for bolts between the tubes and a couple of shaped hardwood blocks will locate the bolts ?
Splay the loops outwards so when a horizontal pannier mount [ the blue bar ] is welded to them the panniers clear the suspension unit.[ probably could be lower than I have drawn it ? ]
The orange then can be the body work curving around the pannier and in front of the rear axle, that rear end is very busy and it will be much easier to work on the disc caliper and rear mech if it is not buried in the body work ?

The whole think looks much longer than the drawing , behind the seat I think ?

How wide is the seat ? what about 2 panniers each mounted to the back of the seat and facing backwards ?
Regards Paul ...so many bikes to butcher and so little time ....

Just looking at it, and I'm not an Engineer, I would expect that the main non-droop-resisting weak spots would be:

It would take a few angle struts to tie it all together but I guess it could be done but, is that the best way? The main difficulty might be the large opening for the doors. That takes out a lot of structure. An aluminium panel in the in the bottom right corner of the left door with a curved edge in the doorway would both brace that area and still allow a lot of open entry space. A plastic strut in the diagonally opposite windscreen/roof corner woulf stiffen that area up.

What you would tackle next, I'm not sure. Maybe you need a steel cockpit framed structure welded to the chassis where it matters. In other words, work out what needs to be strong in order to support the bits that don't need the extra strength. It really needs to be worked out beforehand. I found a lot of difficulty, working with steel, in trying to work out where a connection to something that didn't exist yet, would be. That led to many wrong garden paths. It also led to changing from a tadpole to a delta with its downside of a longer trike and upside of simpler build, more potential cargo area and wider at the rear.

There'll be a panel behind the seat keeping the weather out so hanging anything off the seat will prove troublesome and you're right about it being overly long at the rear. Ideally I'd like to forgo panniers and make the cargo area work if at all possible. Loading and unloading panniers isn't what I envisaged during the design. I'd like the simplicity of a boot / trunk.

If I reinforce the B pillar (upright behind the seat) that will just move the force into the A pillar which pulls on the front curve. Every tube pulls on each other with a force in the cargo area. The tubes are very strong in compression or extension but weak in beam. I can make it stiffer by such means but I think I'm flogging a dead horse without direct support under the cargo area. As you say the door hole is very big and this cripples strength as well as the inherent beam performance of the plastic tubes.

My current thoughts are to make a new chassis from the front axle backwards:-

I can move the rear wheel as far forward as the seat will allow. This will allow me to shorten the rear overhand to 2/3 of it's current size. If I bring the two rails back as a perimeter frame in place of the frame's bottom I then have a poor rear wheel attachment to the chassis. Given it'll hold a hub motor it needs to be sound. By bringing them back in a triangle I optimise the rear wheel mounting. I currently have a double spar arrangement stacked one on the other which is better for overall strength but a side by side double ought to still be twice as strong as a single beam so should suffice. Such a design also doubles the frame to chassis mounts from 3 to 6 so a win there. Having the solid rear allows me to brace from the rear wheel mount, up and out to the underside of the overhang. I could even do this brace in plastic as the tube would be entirely in compression BUT I feel it would be better in metal as it would then provide some extra frame location fore and aft which would substantially help the door to fit. If I use very thin light tube I can use two struts each side and triangulate them to add a lot of rigidity to the frame fore and aft. From the top of these supporting bracers I can replace the bottom of the rear overhang in metal tube. If I can work a way to fix steel tabs to mount aluminium tube I can keep the steel to a minimum and aluminium to a maximum.
With two spars to mount the seat on instead of effectively one I can make the mount there lighter than at present as the current mount is central only so has to resist any off-centre load too. It'll also allow an effective under seat storage area which the cental mount at present prevents. I can in essence mount the seat on a box. I'll have to fillet the bottom bracket tube as best I can whilst still allowing the pedals to clear as I'll have removed a good deal of reinforcement there with this layout.

It's a lot of rework but could be worse and at least has me hopeful again. It's good to get other views on matters.

I have thought of mounting the seat on a cool box which could be useful but I have doubts that any would manage my lard. A chequer plate tool box may prove more resilient if poorer at keeping things cool.
You must log in or register to reply here.
Share:
Facebook Twitter Google+ Reddit Pinterest Tumblr WhatsApp Email Link
Top