I had purchased the Lode Runner plan's some time ago and was waiting for the right time to build yet another Atomic Zombie creation. So this was first posted in General Chat but a decision has finally been made and the Lode Runner is I think the best version of delta for me. As stated in the general section I will be be buying 2 steel framed fat bikes from a local discount store. This will give me the fat wheel/tire parts needed plus a good set of gears, not specifically great quality but good enough to get the job done and a low enough gear range for off road and gravel riding. So it will have 3 26" by 4" tires, each with disc brakes. The fat tires will provide enough suspension, it's never going to be a high speed trike anyway. When the High Roller was built I bought 14 gauge steel and enough for 3 bikes so that's taken care of. Off road riding is a bit harder on equipment so the heavier gauge tubing will be a bonus. A friend sent me a link to one of those gas powered bicycle places and they have right and left hand threaded freewheel adapters, it,s staton inc in the U.S.A. The prices seem reasonable but shipping cost he said were high. There is a choice about the rear wheels, use Brads system of making steel disc's then lacing up to the fat rim's or the method i prefer which is to install a jackshaft somewhere under the seat to transfer power from the right over to the left side which allows the use of the rear wheel and gear's. So it will be a 1 wheel drive from the left rear wheel. Picture the way the Warrior rear wheel frame is built and then imagine that for 2 rear wheels. I have a 500 watt Bafang mid drive motor and it will be installed as well.
Since this will have 26" fat tires the actual diameter will be closer to 29". This will give great ground clearance which is perfect for rough terrain. Now there is one other small detail. I have built and installed 2 different coroplast bodies and 1 open coro rear section on the Warrior trike. Each used a somewhat different construction method. The first version featured an internal metal frame with the coro panels held together with zip ties and hot glue than covered in Dacron aircraft fabric which was glued and then heat shrunk on using an iron. Access was by tilting the the body upwards and it put a lot of stress on the front boom. It worked but the final shape was not pleasing to my eye. The 2nd version featured an internal frame made of pop riveted aluminum angle. The coro was fastened using small bolt's and washers. Access to this one involved a door on the right side and a large top hatch hinged to open sideways. To shorten it up I gave it a stubby front end which was pretty good for mounting flush turn signals and headlight. This version was decent but I had made it to just fit and found my shoulders constrained. An extra say 2 to 3" of width would have been nice. Both of these styles basically worked. They added weight but the streamlining effect even though not professional was noticeable. It really helped going into the wind. Plus in early spring with temp's slightly below freezing the pedaling was enough to keep me warm with light clothing. One important lesson from all this was the Warrior frame does not lend itself very to a body. So this delta is going to get version number 3 body using what I,ve learnt. If it proves possible it will even get a floor albeit with cutouts to allow fred flintstoning to go in reverse. I have at this point 2 and can get my hand's on a 3rd lithium 48V battery so range between my effort and the motor should be far in excess of anything most people would need in a ride.

I will be watching as well, especially regarding the coroplast body. I think our equivalent will be what I will be using for eLecTricks.
Kevin - VK3CKC
https://groups.io/g/pedalradio
https://axerail.coffeecup.com/index.html
https://www.youtube.com/channel/UCP_NWH_v3GVKW-IDYVWgtWA

Here is a picture of the first Warrior coro body built. The raised pieces on the deck were for knee clearance. This unit tilted up at the front via a hinge attached to the boom. Not shown is the rear section which included built in panniers. I can't find a picture of it mounted on the Warrior but this gives an idea of it's look's. 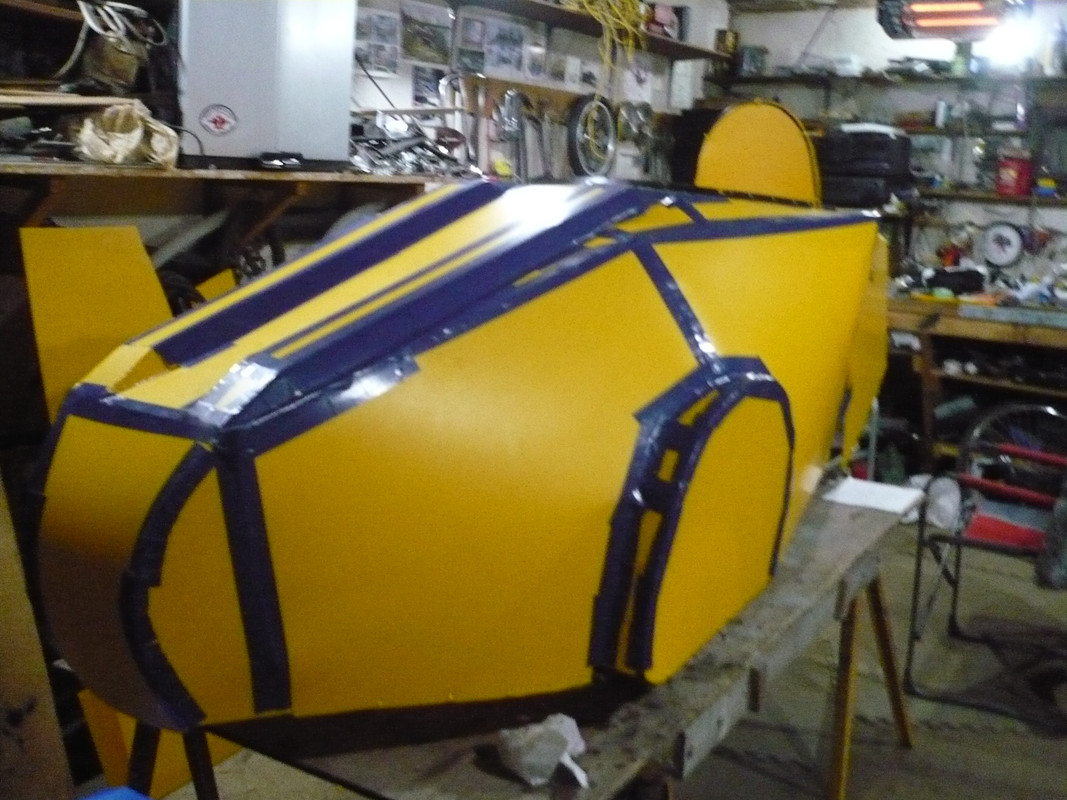 And here is a picture of build #2, first with me in it and then a shot of the door and hatch also rear pannier door open. 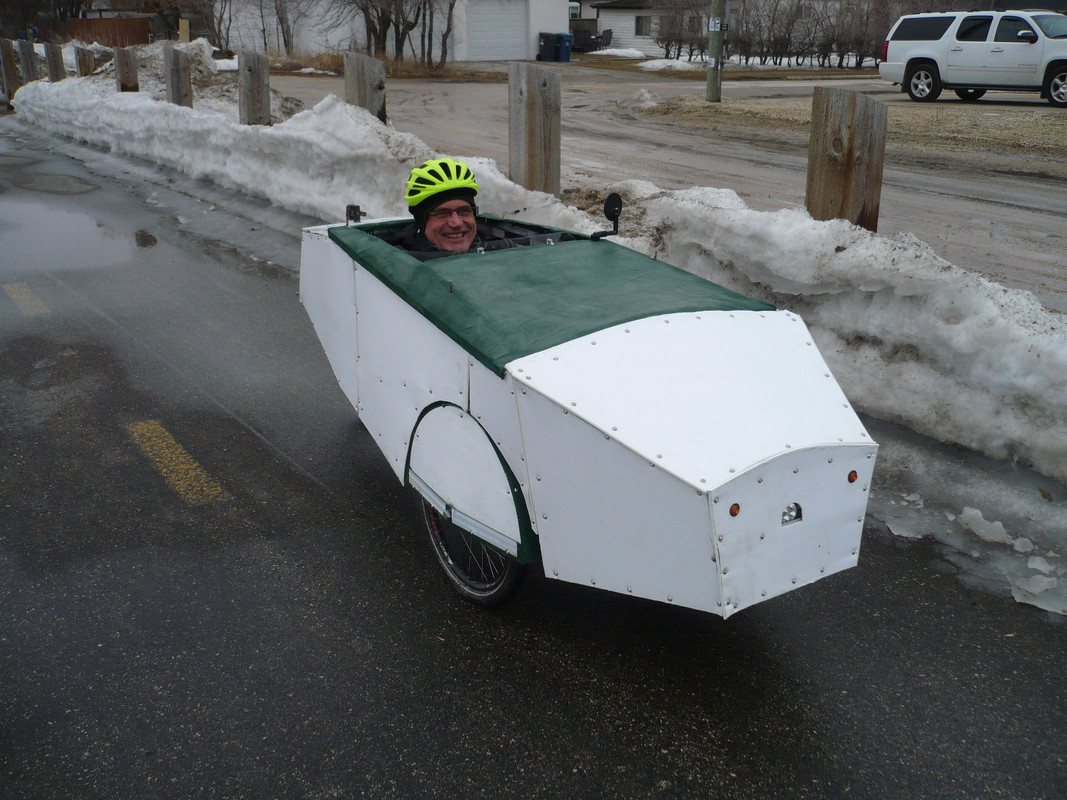 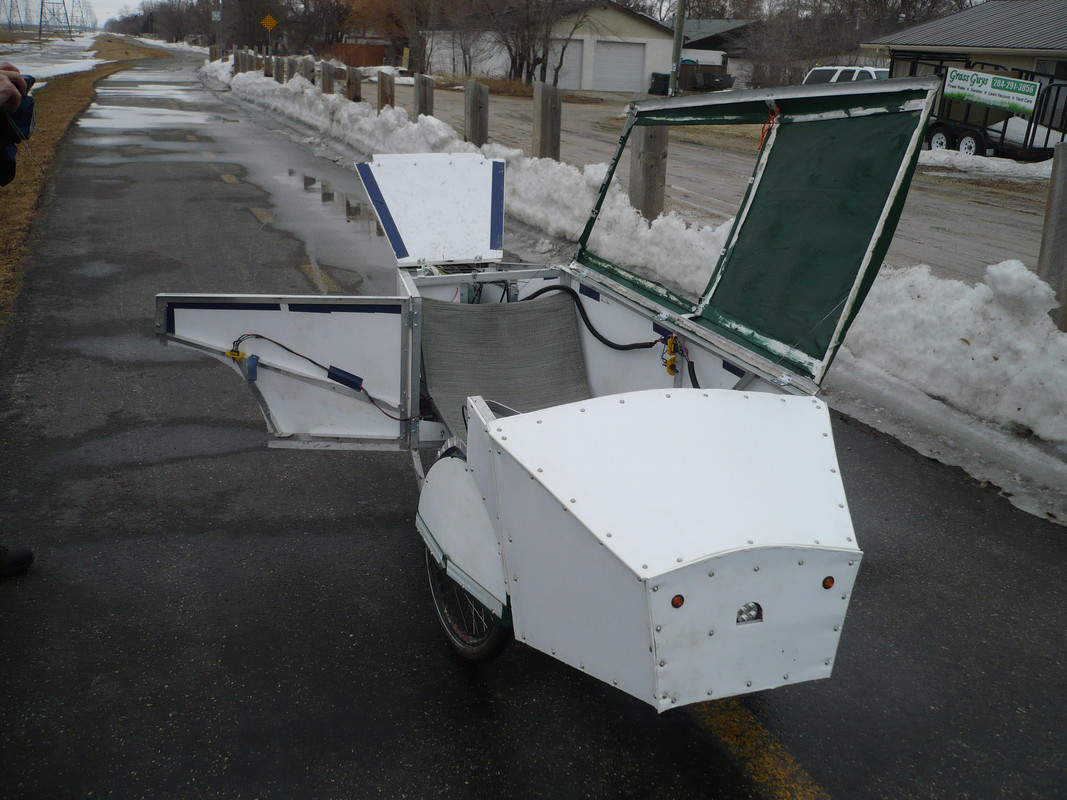 Overall, I'm likin' the white one a little more, although the yellow one looks more streamlined!
Nice work on both, though. Not an easy thing to construct I'm sure!
***
"Bent since 1985, but still not broken!"
Proud AZ Krew Member since June 25, 2007

Hugh said:
One important lesson from all this was the Warrior frame does not lend itself very to a body.
Click to expand...

Some bodies are fitted to trikes, others provide the structural rigidity for the trikes built within them. What sort of a trike frame lends itself to a body other than one that has supporting brackets, etc., fitted in order to hold the body?

My intended method is to provide a minimal floor area on which to stand before sitting. The rest will be as light as I can make it, although I am not building for speed. I only need it to be able to go flat out. It will be fully enclosed with some ventilation provision when needed.
Kevin - VK3CKC
https://groups.io/g/pedalradio
https://axerail.coffeecup.com/index.html
https://www.youtube.com/channel/UCP_NWH_v3GVKW-IDYVWgtWA

Look up a trike called the Mambo. Its a tadpole like the Warrior with the main difference being the central spine is straight with a slightly higher front boom which elevates the pedals. That might make it easier to install a floor and design a body. Now the Warrior is a great design, it's nice and low and I think reasonably fast. The main issue with the yellow body was the strain it put on the extreme front of the boom, it actually bent it a bit downwards, thanks in part to all the weight and due even more so to the state of the roads here in Winnipeg. I raised it back up then came the white body version. For this version I had to get creative with a brace attached to the frame just under the seat. Each arm had a different bend and that was needed to clear the chain and pulley on the drive side and the underseat steering on both sides. That eliminated the strain on the front boom but it was a nusiance to build. Plus being nice and low to the ground does work well for speed and cornering but getting on and off or in the case of a body in and out was interesting and really not very elegant for this 66 year old. That is why a delta trike is the next project, the main tube is nice and straight and should lend itself nicely to the supporting brackets needed to securely mount some type of body. I do hope to put a floor on it as well with cutouts so it can be backed up. One I noticed is in warm weather with a body it is a hot ride. Most velomobile pilots comment on that as well. And i have a friend who built a quad with a coro shell and even in quite cool fall weather he only usually wears shorts and a t shirt. So ventilation will be very important. Mind you this is free advice so you can take it for what it,s worth.

Well no real solid progress but a series of small things. I had stored the square tubing up along the top of the garage wall where it's been sitting for at least 2 years. It has been brought down and a flap wheel was run along all the sides to remove the mill scale and a small bit of surface rust. A visit to Princess Auto - which is a hardware chain here - yielded the 5/8" pillow block bearings and a section of 5/8" cold rolled round stock. 2 machined 5/8" I.D. freewheel adapters have been ordered and are on the way from the states. Now I,m just waiting for the the discount store to send me a text saying that the $200 fat bikes have arrived. The plan is to buy 2 of them and have all the wheels, tires etc needed for the build. I can't proceed till those part's are sitting in the garage, they are needed to make sure everything lines up properly.
You must log in or register to reply here.
Share:
Facebook Twitter Google+ Reddit Pinterest Tumblr WhatsApp Email Link
Top