Those wheels look great. If the build is even half as good looking as the renders, it'll be a real beaut!
Ryan - Elma WA
I go by "geocrasher" everywhere else
Instagram: https://www.instagram.com/miscdotgeek/
Blog/Website: https://miscdotgeek.com
E

I am going to order the 26 inch rim also and also use the red nipples for it. Will use the rear hub that I have now, to get the same look as the front wheels.
E

Send out the drawings and dxf's for a price and also to let them make the parts.
It's way more than my first build in parts for the steering but less in square pipes.

I checked it several times and forgot still several things. Do I send several mails with info and files.

As it hoes well, it will I think 2 weeks. They told me that by the previous order I did. They put my parts in between orders they have and what is normally waste. So it saves me some money on cutting. But it takes a bit longer before they have all parts.
Last time it was in a week, but it depends on what they have for orders.
Also no 21% tax.

Parts like brakes came in. Still some parts need to arrive, but I think I have it all, when I start building my trike.
Replacining some bolds for red ones. I did it with the disk brakes and it looks better than with the blak ones.
Rear wheel I will use the one I have, but I will replace the rim with the some one that I have on my 20inch with black spokes and red nipples.

Hand brakes are now chrome, but will be in the same collor as the frame.

I still need to let the factory make surten parts, but I will do that as the main frame is ready. Seat mounts and battery mounts will then come.

I will 3D print some parts where I can mount things on, like the display of my e-assist, electric box, and some other small things.

Only need to look ad a headrest and place to mount my rear light. I will probably mount that on my headrest.
As I have my parts cut, I can start with the build.

Preparing my amonution boxes for the batteries. Got the parts to fix them to the frame and still be able to take them off and got the hardware to put locks on them.
Probably going to paint them black and put a warning sticker for high voltage on.
2 19,5ah batteries will be enough I think. Maybe I make them 22,5ah. But I start with one. I have except the cells, everything to make 2.
They both get a smart bsm that shows the info on my phone. Also on the box, I mount a battery indicator. According to the info, it has a temperature sensor also on it. On off switch and charging connector. Connector do I can plug it in to my motor. That will all go to an electric box where I will put a switch, do I can switch from battery, without having to switch a connector.
E

But now I can finally start building.
Need to drill and cut a few things and then I can start welding.

The frame is a lot lighter than my current frame. Just crazy how much weight I safed with the steering by the wheels. 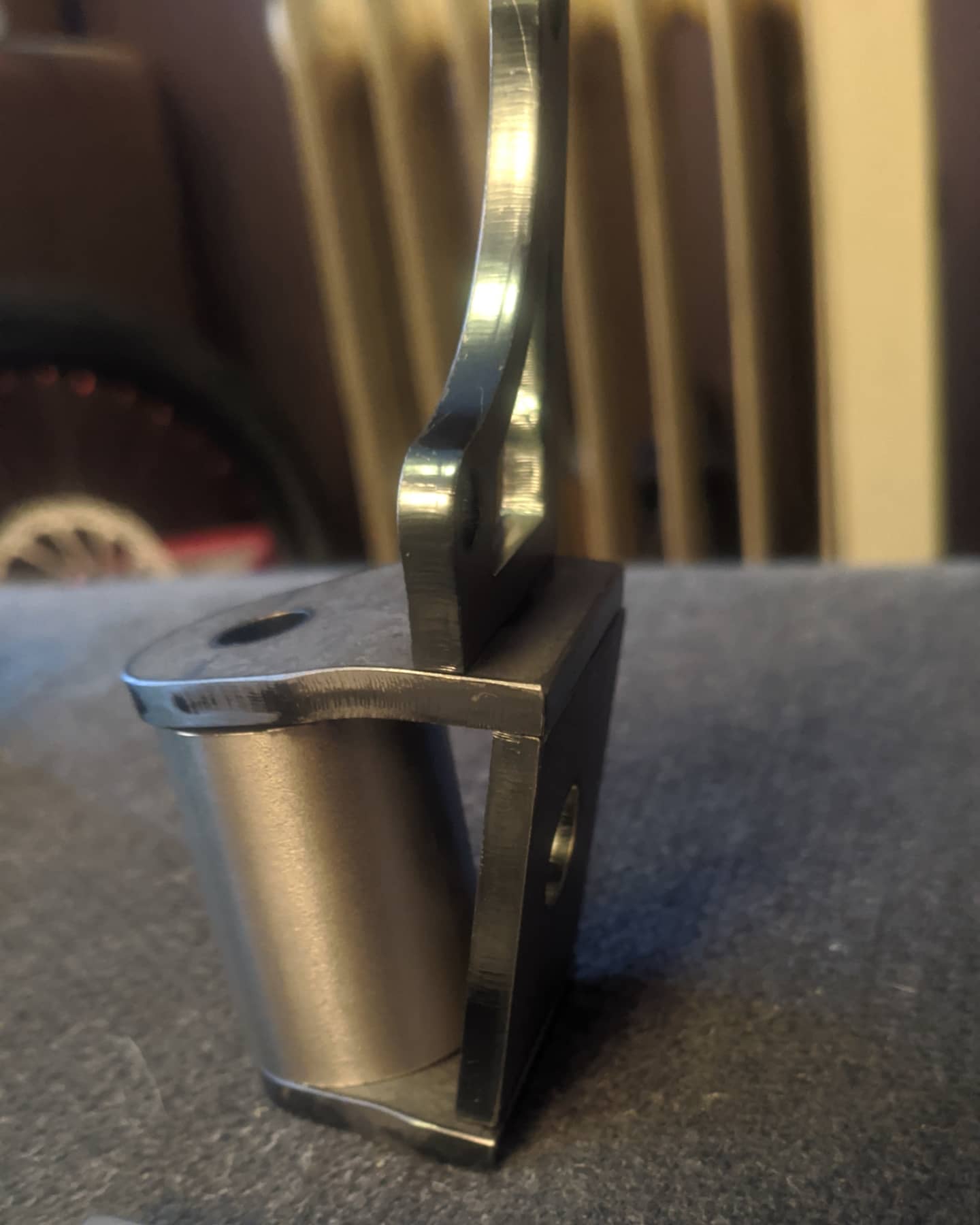 Small part of the steering. 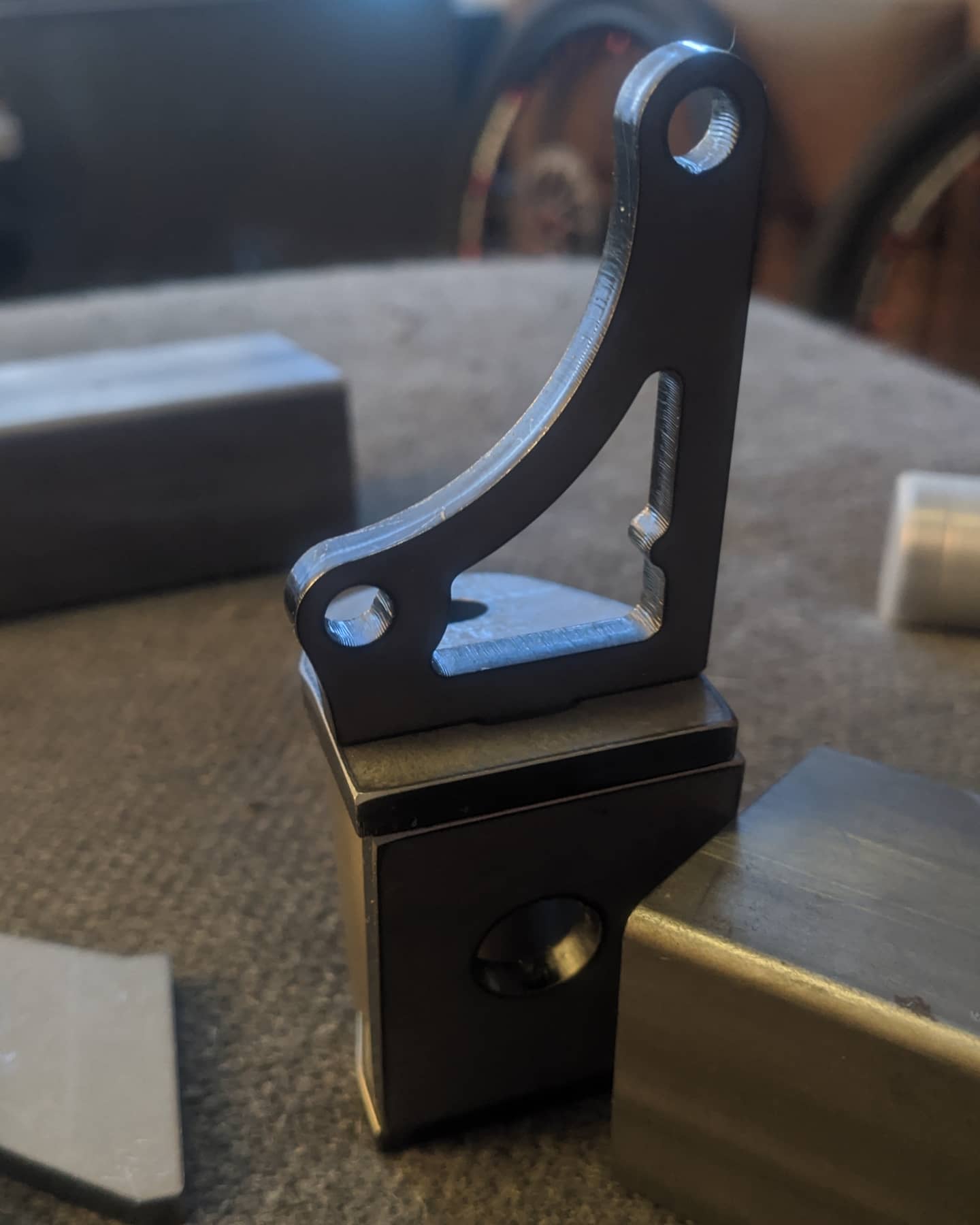 Also made the mount for the disk brakes. Avid Bb7 brakes. 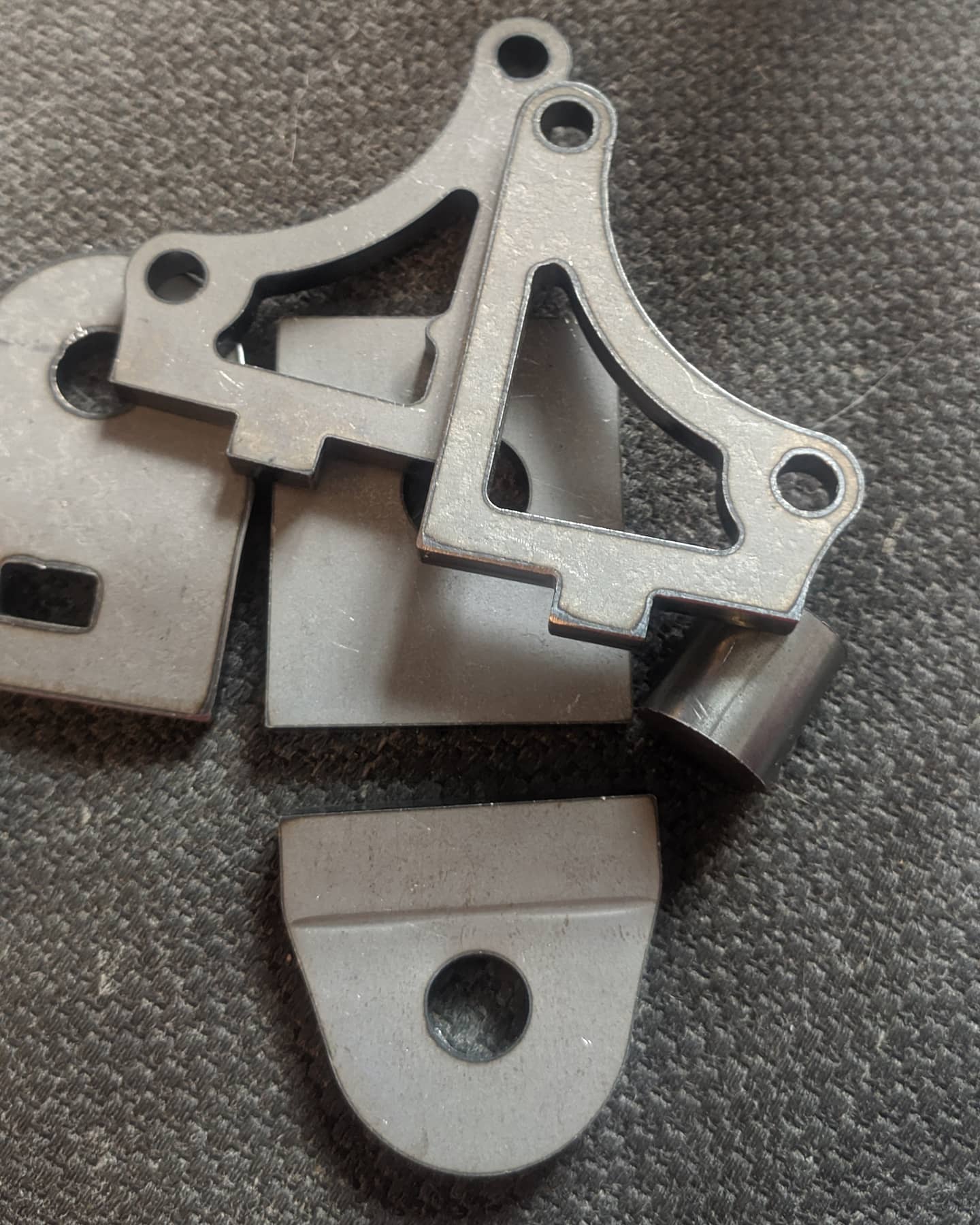 This is do much lighter and compact. It saves a lot of weight and brings the front arms down.

Some fancy cutting on those parts.
E

Popshot said:
Some fancy cutting on those parts.
Click to expand...

I putted my frame togheter with some prints.
Green part is where the 20x40 tubing for the seat comes.
Orange part on the first image is where the holes round 32mm come. 3 in total. One in the back for the rear suspension and in each arm one for the steering.

The second image is one of the arms from the side. Orange line is where it will be cut as the hole is in it. 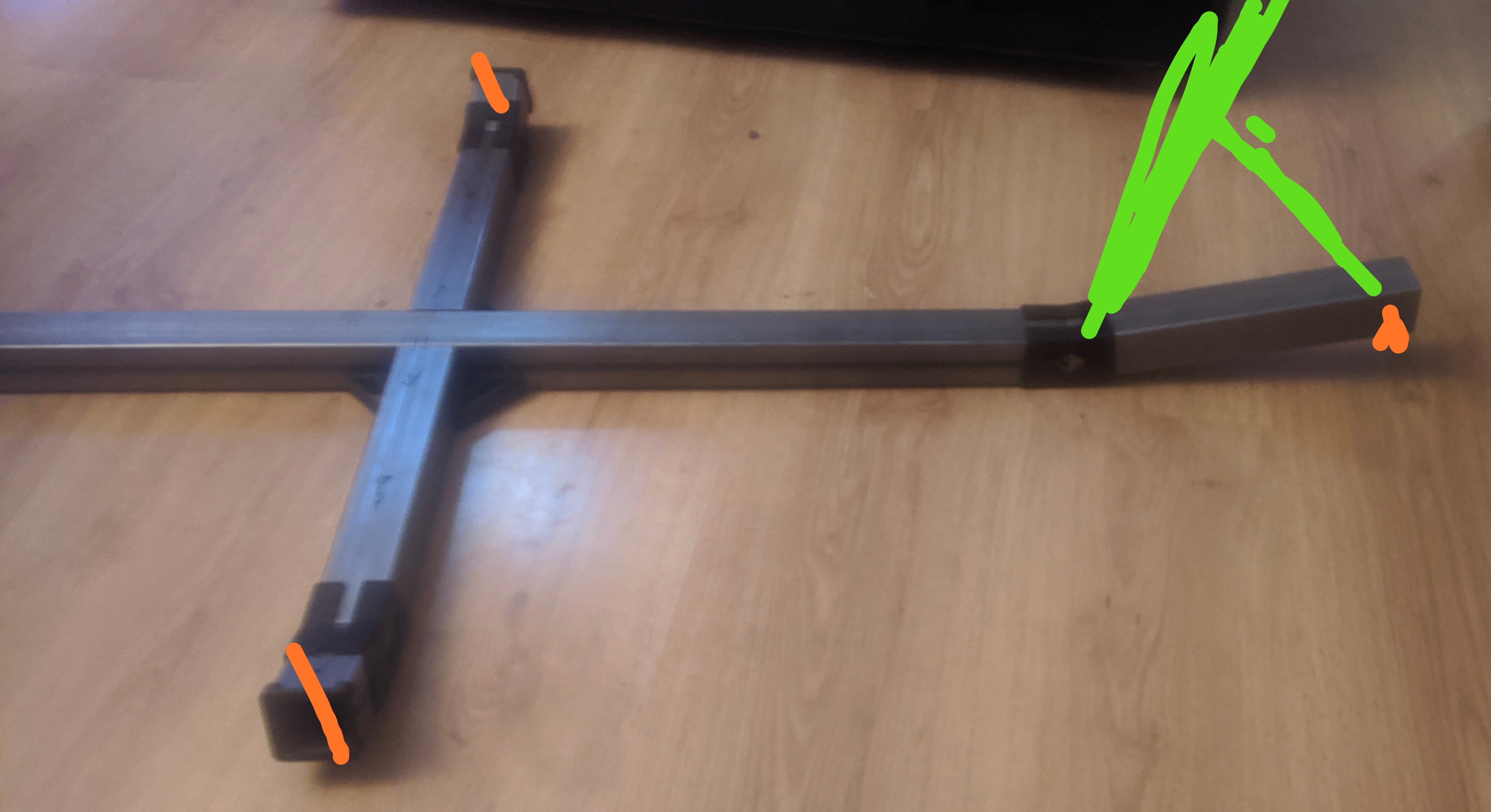 Ordered the rim for the rear wheel. Then I have all 3 wheels with the same rims and all look similar.

Today I made a lot of progress on the frame. Arms are mounted to the frame and also a part of the upright part for the seat.
The frame is further than I expected to get.
Tomorrow I will try to cut a few things and weld one part to the frame.

I hope that I can finish the steering this week.
Underseed steering will be added after the rear and the seat is mounted. But the front part is something I want to finish this week.

Next week I want to start with the seat mounting. After that, I want to make the mounting of the rear and the suspension. And as that is all done, make the Underseed steering and make the drive train ready.
E

The frame so far.
Need to weld the long part of the back of the seat and cut the ends where the steering and the rear comes, but other than that, the base is almost ready. 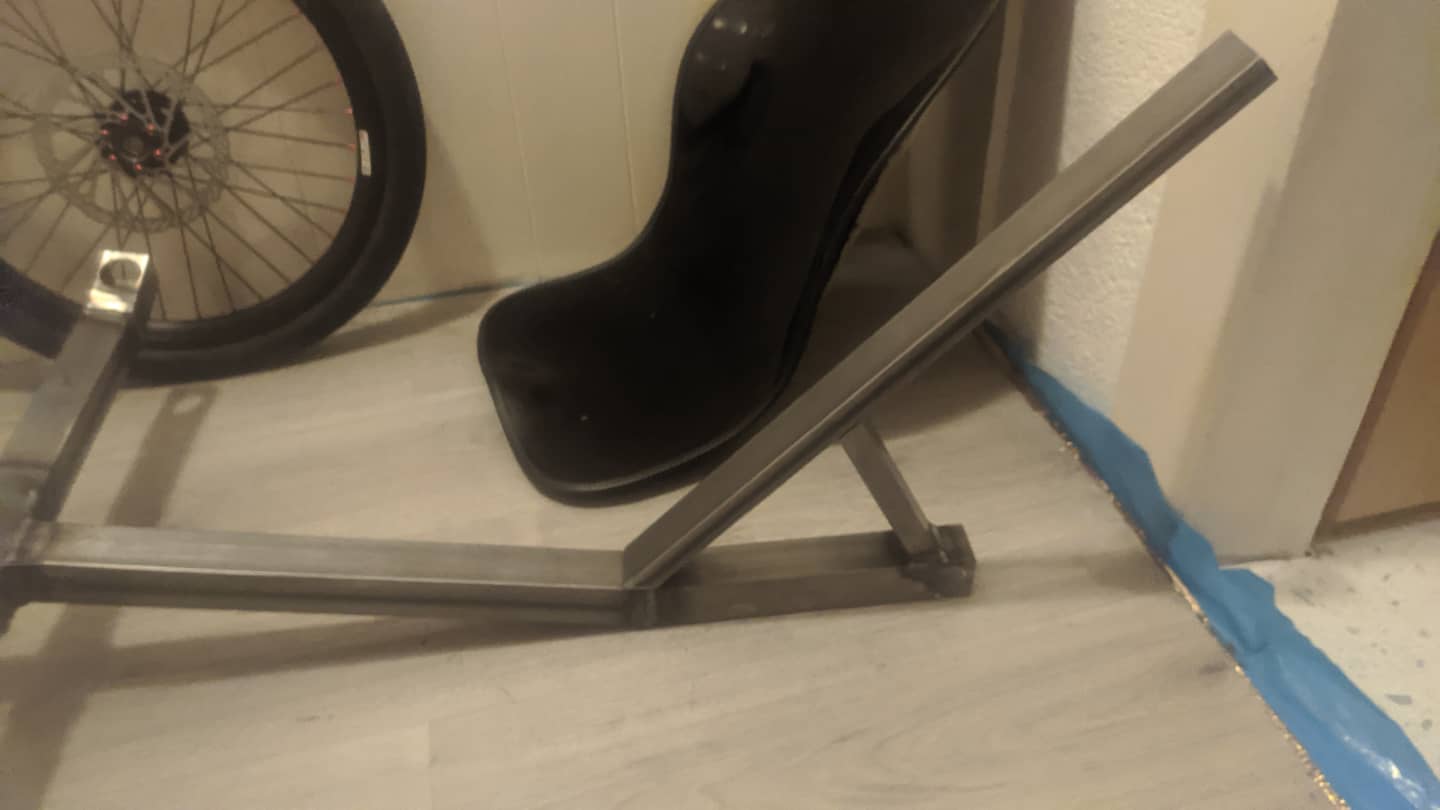 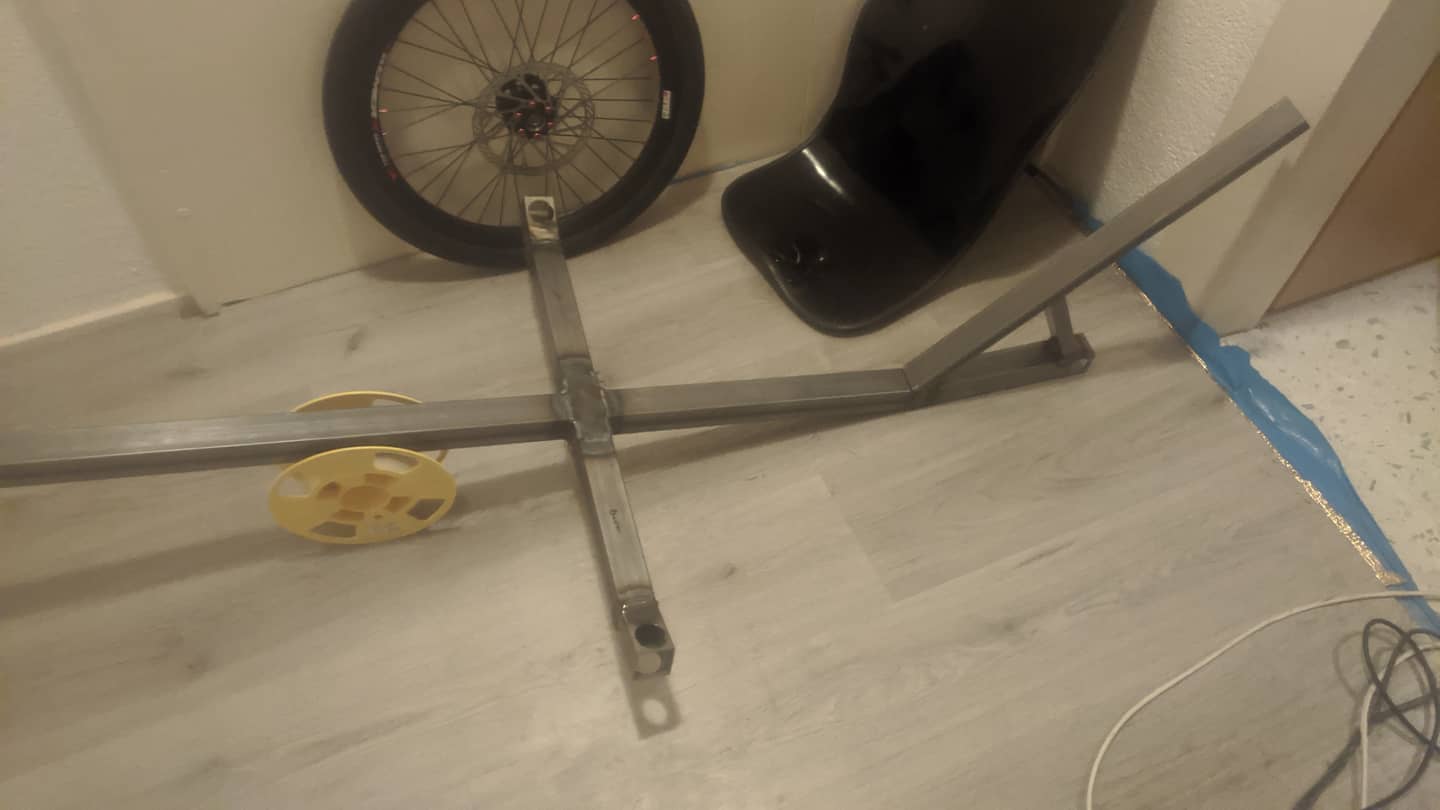 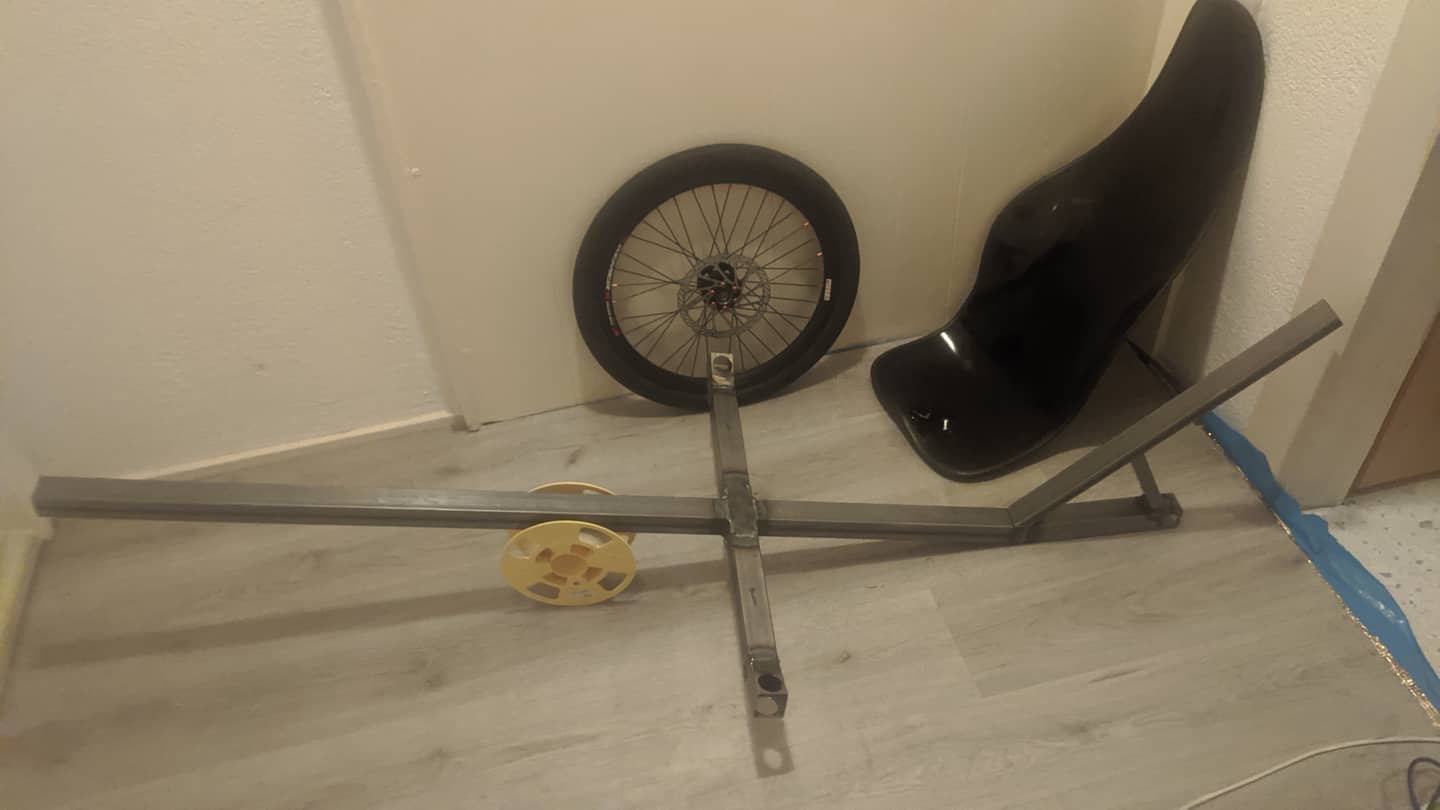 All dimensions I gave, where right and the same with the angles. I moved the seat 15mm to the front, but that is the only change I made.

It's a simple basic frame with steering mount like the kmx trikes have. I tried to keep it simple in the base and save weight with the steering and with the aluminum rear part. I wanted a light frame with suspension and undersea steering this time. Also have more prepared this time, so it is easier and faster to build. Seat will be adjustable also this time.

Just printed the first mold, to hold The steering tube from round 32 in the right angle and position.
Going to model now one for the suspension.
It held a lot with welding. I did the same way for the arms and it was so easy and fast. Had to do this by my first build. It would have helped a lot.

It is early dark and the shop below me is being rebuild, so they sell there stuff ad the back. So I can only work ad home after 6:30. But then it's to dark to see something with welding.
So I need to wait till Sunday, or go to someone.
So I am preparing a lot right now and start designing the seat mount.

Rear rim comes in tomorrow. I will contact the BMX shop soon for when he can put it on my rear wheel that I have now. I will wait till my bike goes to the paintshop. I want it to be ready as my bike is ready.

A picture with the rear. 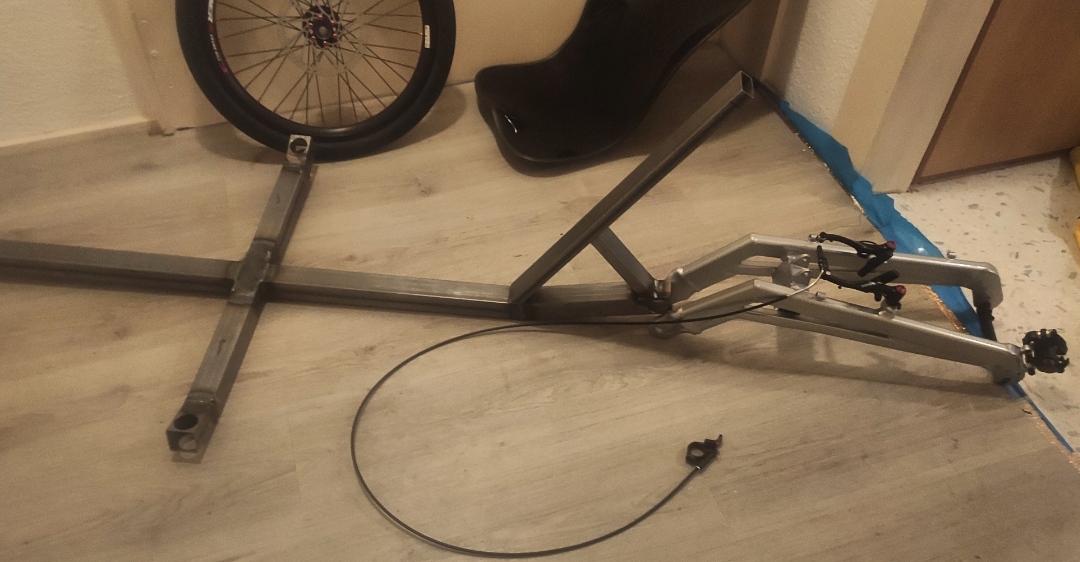 This way it makes it more complete.
Last edited: Tuesday at 6:29 PM