All the body panels have now been cut out so I just need to figure out some type of rear fenders plus add reflective strips to the sides and LED turn signals and tail lights for visability and safety. The lights and the harness are already made - just need to decide where to place the lights.

That's a bright colour! I know it's after the fact now but wouldn't angle iron the same dimensions as the box be half the weight of that box that's holding the body, maybe only using box around the door for extra rigidity. The bolts could have been shorter too, again saving some weight. I'd mount the windows from inside. The sealing issue is pretty much the same but it'd look a better installation IMHO. Are you putting any mirrors on?

All good point's Popshot. I used the sq tube mostly because I prefer it to angle. This thing is heavy anyway and I figured the loss of a lb or two wouldn't mean much in the overall plan. Windows to the outside to me just looks cleaner and means no sealing of their coro flutes. The trike also has 3 batteries, 2 of which are lith-ium for the e assist and a small sealed lead acid 12 V for the turn signals, rear 4" LED and headlight. As to mirrors, absolutely yes - 1 mircycle mirror and maybe 2 mounted through the sides of the body.

Body is now finished although I may still add some rear fenders so here are 3 pictures from today. It's a local paved bike/walking path. The temp was about 5 below celcius and with a sweater and light jacket I was way overdressed. 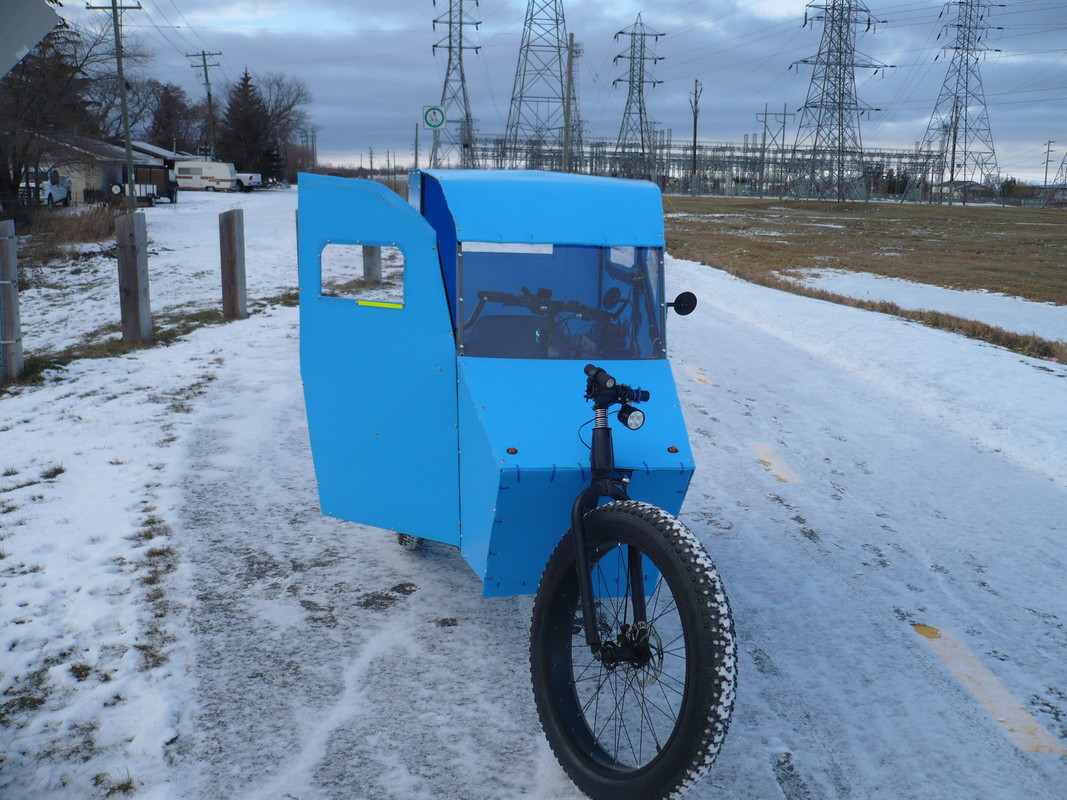 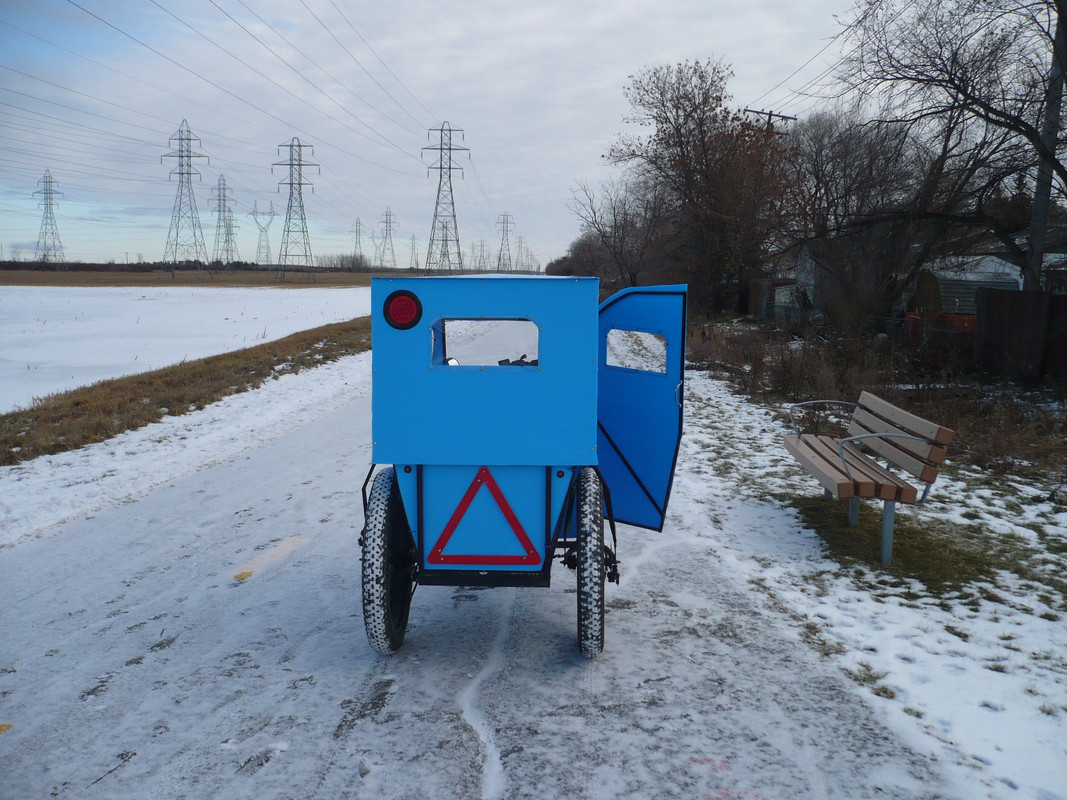 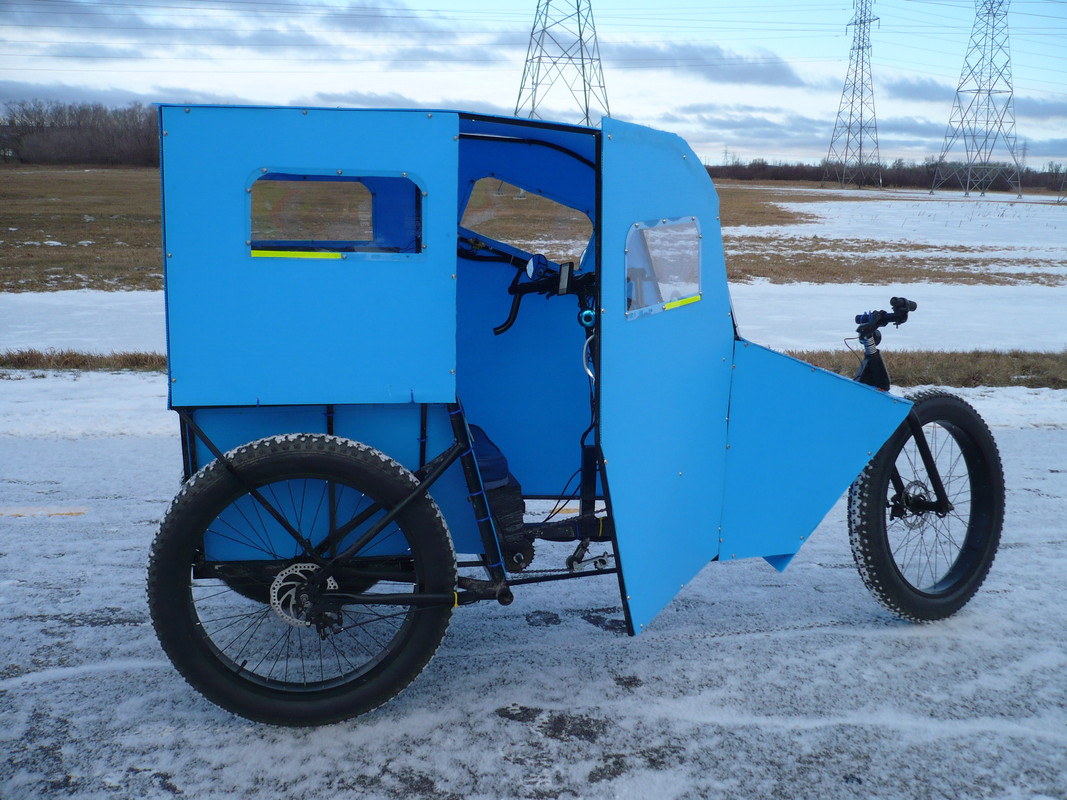 Hugh said:
Body is now finished although I may still add some rear fenders.
Click to expand...

They may be useful if you rode with other cyclists to keep them clean ? however it looks very fender like already and is easily hosed down ?

The temp was about 5 below celcius and with a sweater and light jacket I was way overdressed.
Click to expand...

Wow a real result , I cycled today in -2c with 2 pairs socks , tee shirt , sweat shirt , body warmer , cycling jacket , scarf , buff , and skull cap and thermal hat......
It was very cold @ 14mph and out for 40 minutes at a time was definitely enough , still glorious morning blue skies and weak sun.
Regards Paul ...so many bikes to butcher and so little time ....

I love the rear view. The inverted slope of the coroplast and the red triangle are very aesthetically pleasing. The boxing in of the arches is a nice touch too. Good job you didn't do it in red or you'd need a black and white cat with you at all times.

Nicely done. It looks great. I am using 8x LED strips for my build, they were just a few bucks on amazon. I'll be controlling them with an arduino so that I can make patterns for them to really draw attention to the trike. It wouldn't be hard to do the same here
Ryan - Elma WA
I go by "geocrasher" everywhere else
Instagram: https://www.instagram.com/miscdotgeek/
Blog/Website: https://miscdotgeek.com

Thanks MiscDotGeek, I am interested in learning about using arduino so that may be in my future as I educate myself. I've taken the trike out twice now for test rides with the body on. The first one the drivetrain developed a giant snapping noise especially when trying the faster gears. Turned out the gear cluster on the left of the jackshaft needed to be moved over about 1/8th". The chain was catching on the sprocket next to it. Then on to the 2nd test ride. I went to a local Dollarama store and figured why not take the trike. This time it shifted great with no noise at all. When I left the store the route took me past 2 elementary schools and the kids were all outside on recess. I'm riding along suddenly there's what appear's to be 70 or 80 screaming kids running up to the edge of the school yard, there are all yelling - cool bike - and giving a thumb's up. That was kinda cool. Then when i get home after a short ride a friend send's me a text saying your on facebook, someone took a picture when the trike was parked at the store so that gathered quite a few comment's. The best thing though was the ride, our weather here has been a cycle of snow then warm then more snow so there is a lot of ice and the trike was fantastic in those condition's. I kept the speed down preferring to travel about 9 mph and there was very little tire slippage. And again the temp was just below freezing and the body proved it's worth by helping me to stay warm. Now I can hardly wait for the spring rains to get out and ride in the rain.

One more ride report before it get's really cold here. Yesterday I set out in the morning to ride from my home in the East of Winnipeg to a place called the Forks which is a junction of 2 river's, the Red and the Assiniboine. Distance a bit over 8 miles each way and the temp was 20 below C when I started with little to no wind and temp rose to 14 below with a light wind at ride's end. I started around 10:30 AM and home by 3 PM. Average speed for the first 2/3rd's was 16 kph then the trike suffered a bit of a mechanical issue with the rear cassette and in order to prevent slippage the speed had to be held under 10kph. The best part was that the wind protection of the body really came through. Foot protection was a pair of felt pac winter boots then jean's with thermal longjohn's and a T shirt with a pull over sweater and a zip up hoodie followed by a fairly cheap high visability jacket. Head covering was an insulated beanie type of thing under my helmet. In the first 15 minutes of riding both top layer's had to be almost completely unzipped due to heat, that was constant till near the end of the ride when I got a bit chilly and zipped back up. The only part that I could feel the cold oddly enough was the heel's of both feet, the trike has no floor and at the bottom of each pedal stoke the back of feet were in the wind. For my hand's a pair of snowmobile mitt's with a chemical hand warmer in each - I really don't like like cold hand's and if it had proved necessary to do anything with the mitt's on the warmth would be greatly appreciated. This trike has electric assist and has 2 lithium ion batteries, one is several years old and is used as a backup and the main one is slightly over 14 AH. Since this thing is heavy, prob right around 100 lbs it is a power hog. Also the lith ion batteries are like people for temp preferences, extremes of hot or cold are bad. The cold really cut's the range, in my case the roughly 16 miles was the limit of range for the main battery. This issue will be addressed shortly with the use of some rigid insulation around the batteries. They generate heat while in use, insulation should help. I had occasion on the previous weekend to speak to a fellow who ride's an e assist trike here in the city due to health issue's, he had a stoke some time ago - and he is very knowledgeable about the batteries. He keep's his in an insulated bag on the rear of his trike and monitor's both the outside temp and the temp in the bag. It was about 5 below outside and his batteries in the bag were running about 10 above C. He take's no chances and carries a charger always and if he has a stop of any length look's for a plug in. Walking is a real issue so he is careful about being prepared.

Great build! Check it out in the Newsletter going out today!
Brad

Fantastic build! You have added to my build itch. I started riding an EUC to work in the fall but have been working on some plans for something to shelter me on inclimate weather rides to work.
Again, great build and thx for sharing it with us.
Cheers, Patrick
Be respectful to everyone - But dont take **** from anyone!

Thanks for the kind word's and it was a surprise to see it in the newsletter. I knew it would be an attention getter but underestimated just how much attention it would generate. I,ve had people in car's wave me through intersections so - I think - they could get a better look. And lot's of people taking pictures with their phones. I,m not sure if they are laughing at the trike or are intrigued by it, but it doesn't matter, it has turned out pretty close to what I was hoping for and is still super comfortable to ride. The reason I selected the fat tire style is I really like the look plus I have a fat bike with 4.8" wide tire's and they work well in snow. E_Motion for a work commute using say 26" mountain bike tires might be a good option - less rolling resistance than the 4" wide tire's. Curious though what does EUC stand for?

Fat was the way to go for snow for sure - just get a bigger bat for better range
Electric UniCycle
Cheers
Be respectful to everyone - But dont take **** from anyone!

You ride an electric unicycle, hat's off to you. And yes re the bigger battery, I have in my possession a 17.5 AH that will be put to use over the next few weeks.

Thx for the advice. I am looking to do a very challenging build, well, for me anyway! I want to do an enclosed Tilting Tadpole with no chain except to a generator. The Genny is just to peddle to keep me active an give some resistance but the trike will have minimum 20AH battery. Got most of it worked out in my head but that is a poor storage device so I am trying to learn FreeCad to put proper for others to use if they want. Tried to install my napkin drawing but not working
Cheers, Patrick
Be respectful to everyone - But dont take **** from anyone!

I like the concept. Do some research re the generator setup, I may be mistaken but here in Manitoba anyway I think in order to qualify as a bike there has to be a mechanical connection to a drive wheel like a belt or chain.

E_motion said:
I want to do an enclosed Tilting Tadpole
Click to expand...

That's about as tough a build as you can get. There's often a lot of compromises in a tilter and adding a body into it will probably add a lot more.

Hugh said:
I like the concept. Do some research re the generator setup, I may be mistaken but here in Manitoba anyway I think in order to qualify as a bike there has to be a mechanical connection to a drive wheel like a belt or chain.
Click to expand...

Probably the same here - but cops are ignorant (not stupid) about these things --they see pedals and your good as long as you are not doing 80kph passing cars in a 60 zone.

I have often wondered. Our Australian rules are that you must pedal in order to have the assist. Unless you have charged the battery externally, technically, you have had to pedal to get the assist. I bet they would explain the rule to mean "you have to be pedaling while you are getting the assist."