Thanks for that. I plan to have sliding side windows so should have plenty of air flow. There's also the cut-outs in the wood side which I can panel in or not depending on if the windows prove sufficient. I'm also toying with the idea of a sunroof but sealing it will not be easy plus that roof panel is moderately structural. I'm aiming for a curved windscreen to encourage rain to go around it and fall off the sides which will slightly overlap the side windows. I'll give some thought to using a ram-air scoop and some ducting to flow air directly to the windscreen though I think I'll wait and see if it proves necessary. I could cut into the bonnet / hood just in front of the screen to keep ducting short.

The front end has bent round just fine and the two R-clips near the front are all that holds it on. 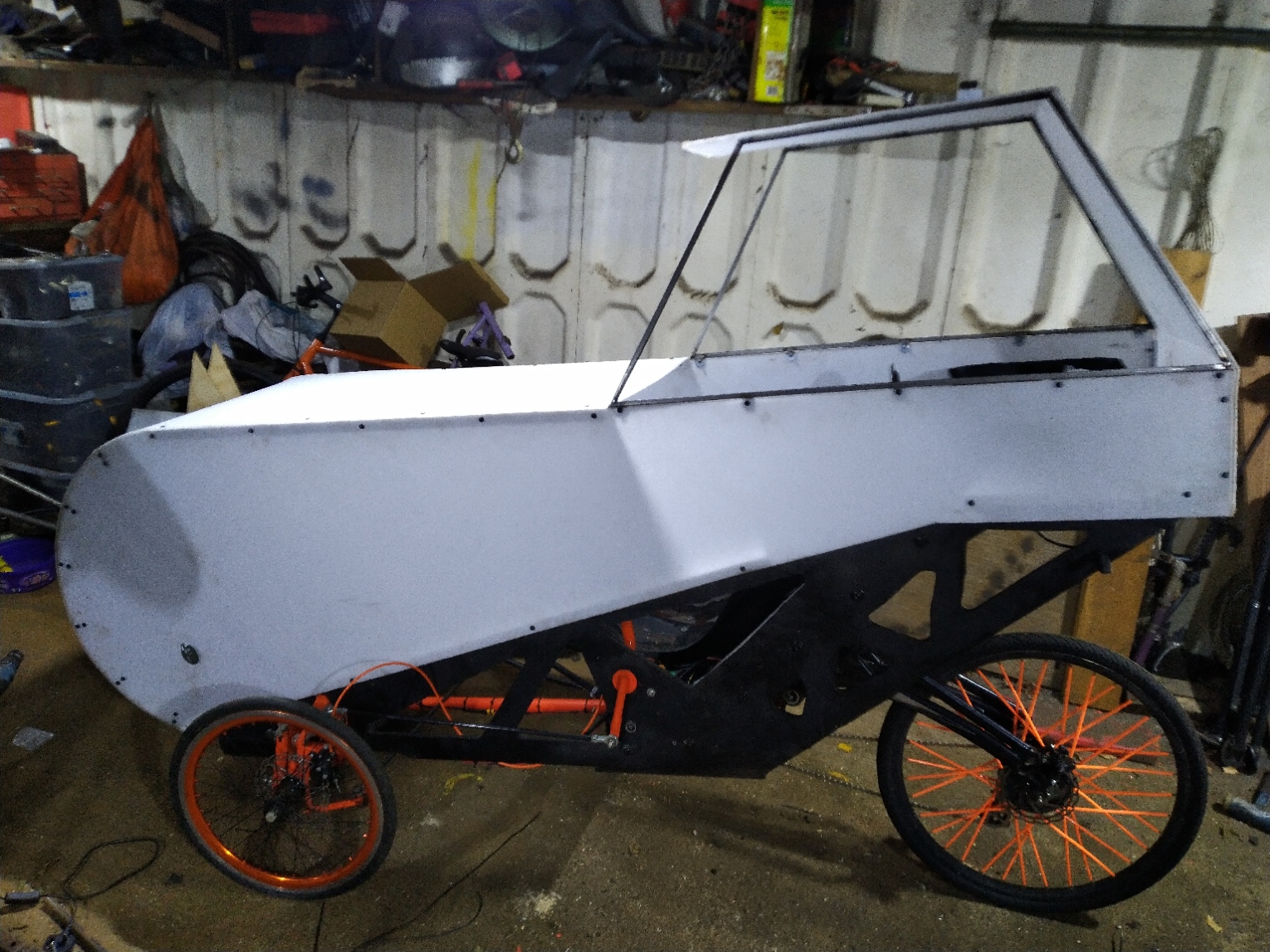 I think I'll have to modify the canopy though and probably lower the rear end a bit too. I've also noted a bit of warp in the wooden bits so that will need some corrective adjustment before anything else is done.

It's kubota orange with a lot of phosphorescent powder added.

Great project, I just shared it on the AZ Facebook page.

Thanks Brad.
Doesn't look much but it's been a long day's effort to de-twist the rear end with the help of some M8 rod. I started with M4 but it snapped! I've also dropped the rear by 5.5". It'll make getting on the seat easier, stabilise it better in the corners and lower the overall height of the finished body / canopy. I will loose some vision close to the front but I believe the stability requires it. I'm still unsure what to do with that canopy. One way under consideration is to make a curved screen and short side windows to provide sufficient fixing points on the side, then make a detachable roof / rear sides / back in canvas or thick polythene and press stud fastening. This will likely leak more but provide more sun and air in summer. The other alternative is to simply cut 3" off it's height and stick with the original plan. 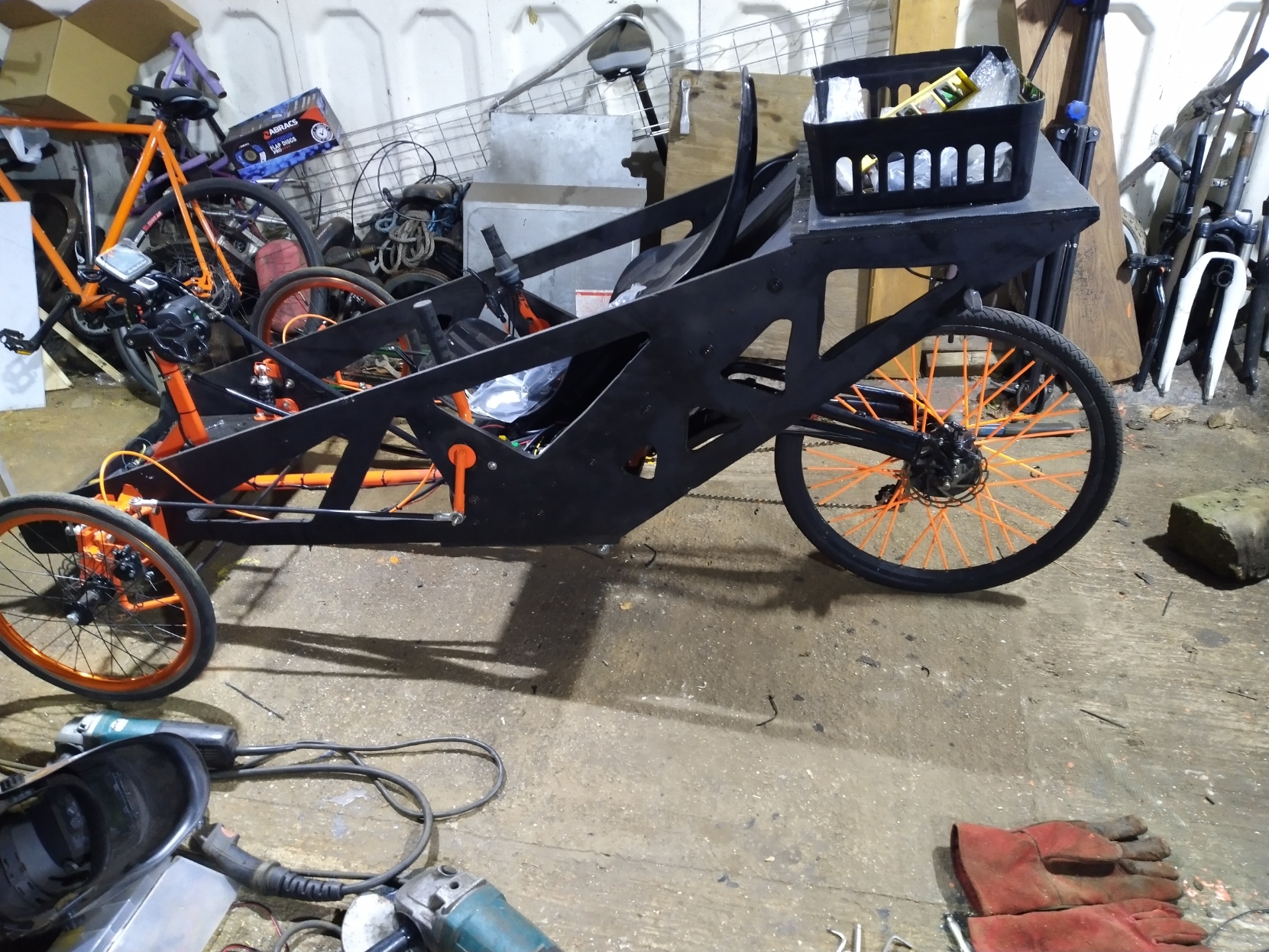 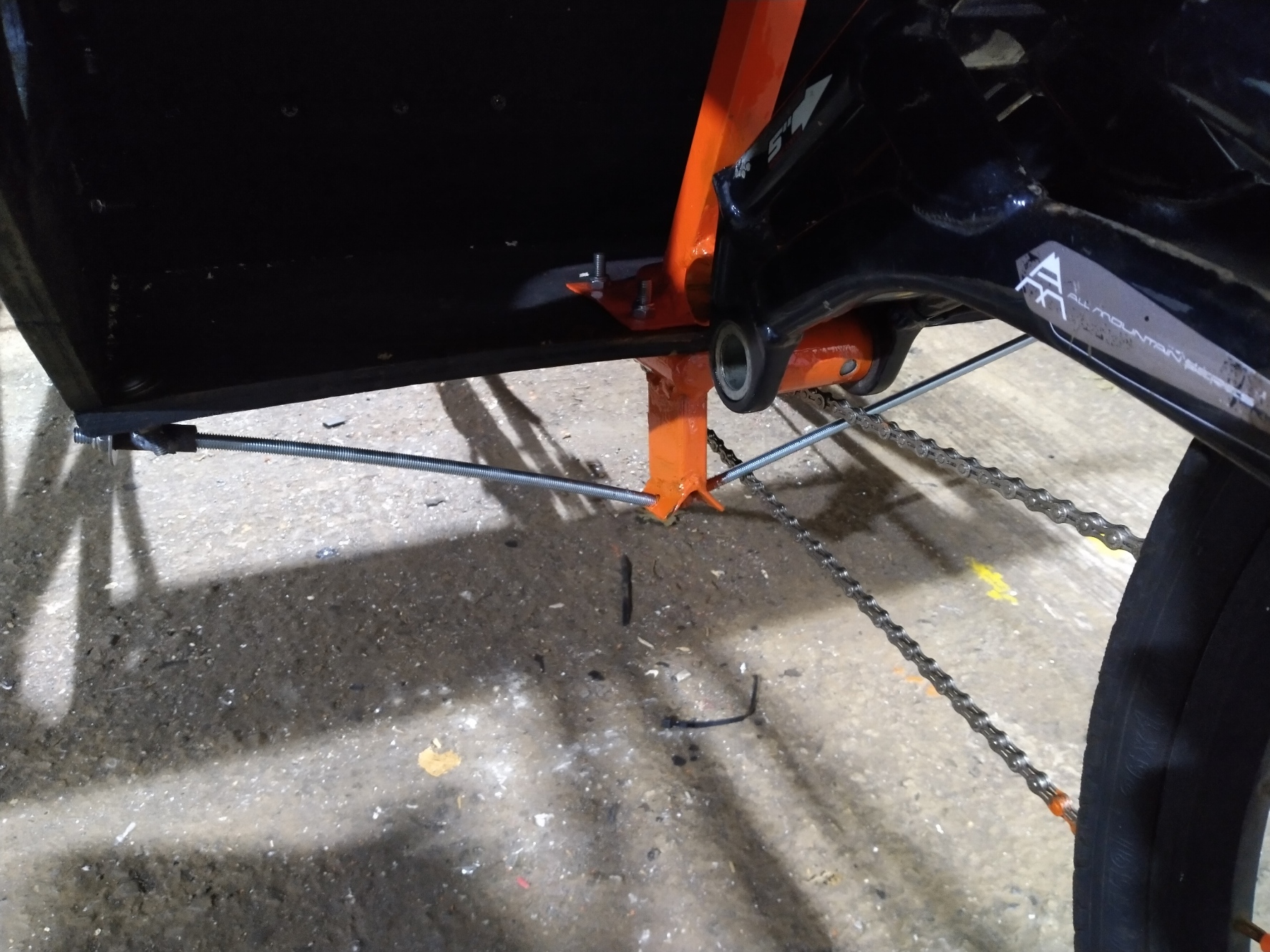 The spirit of pigstysy revealed. My glow in the dark hood ornament 3D printed for me by my ex. 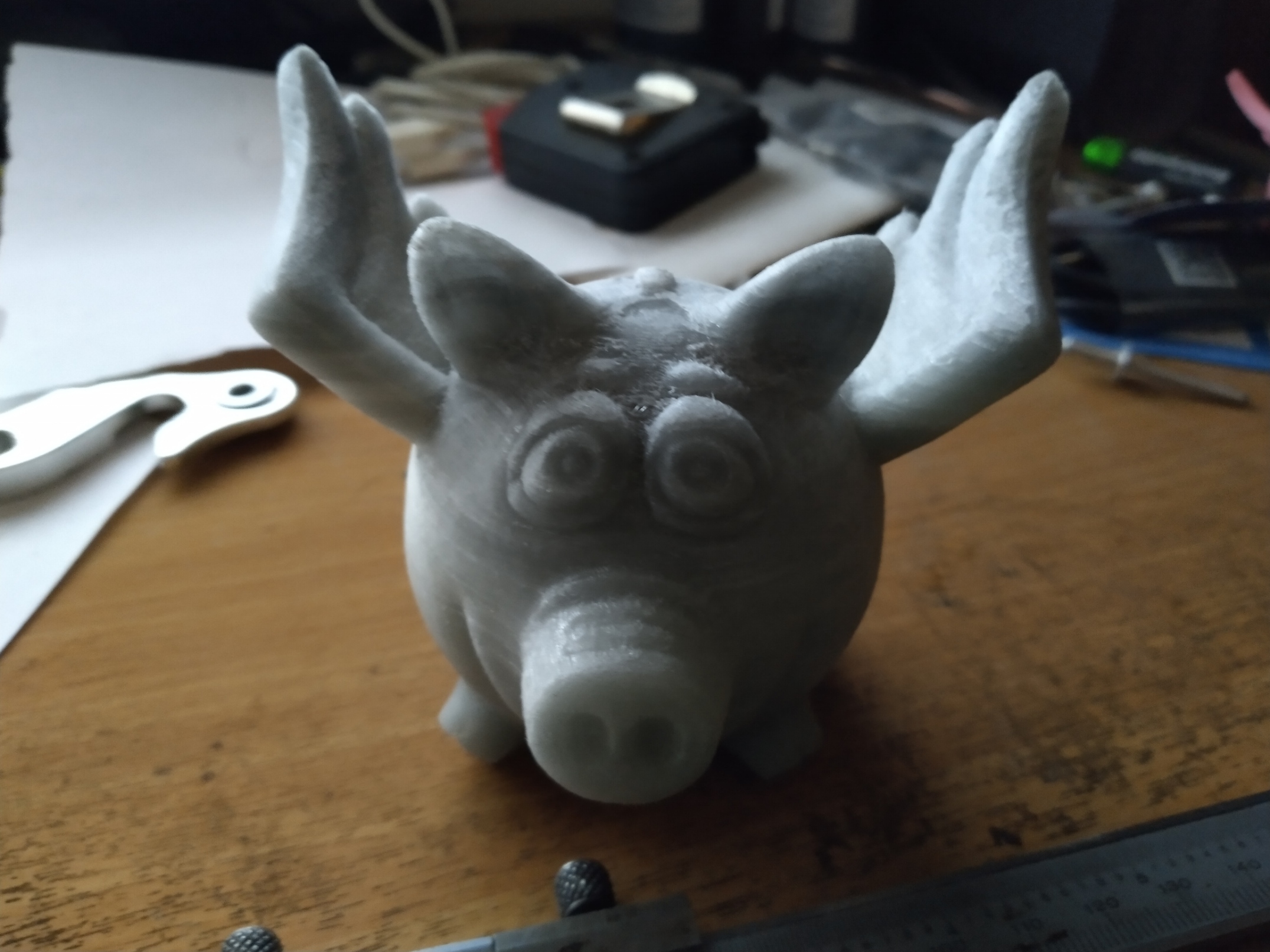 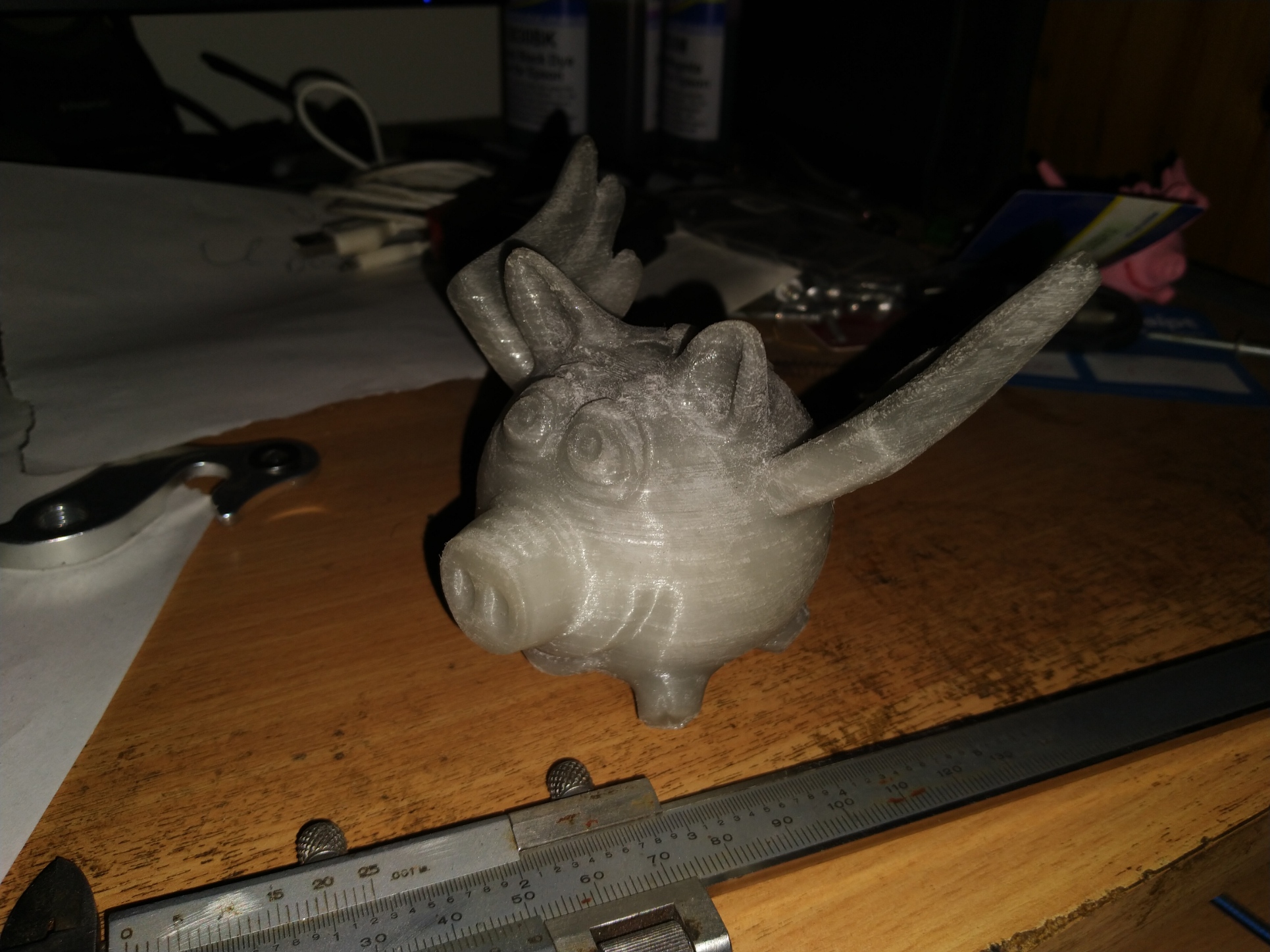 Long time no post. I've had this project parked since I first attempted to build the canopy. Put simply I didn't like it as designed. It was far too tall, looked awful and felt claustrophobic. I've since come to a decision, after a winter of pondering, that it'll be best if I keep the roof a removable item so I'll go for a windscreen only and worry about making a throwover canopy for the rain later.

So back to work on it. I tidied up a number of loose ends and took it for a spin without the body to shake it down. Oh dear, the N360 left me with a top end of 15kmh. It must require a 100T sprocket up front for any reasonable speed. I've now pulled the thing out and have a 700c wheel in there now with a 10 speed set on it. At least I've just lightened it by about 3.5 KG as that CVT hub weighs just that. I'm now waiting for a 10 speed shifter from the post fairy. There's some body trimming to do to let it raise fully against the woodwork and that screen to make. I'll try to get that done by the end of the weekend.

The good news is the Tongsheng TSDZ2 motor is a really nice way to get power assistance. My previous systems have been rear wheels with full grunt applied on simply cycling the pedals, which whilst a boon to the bone idle doesn't make for a smooth experience. I'm going to like the TSDZ2. The motor has enough grunt to mean I need to brace the BB diagonally down to the main chassis. You can fair hear the wood protest. It's a simple job to add one where shown though so no problem. 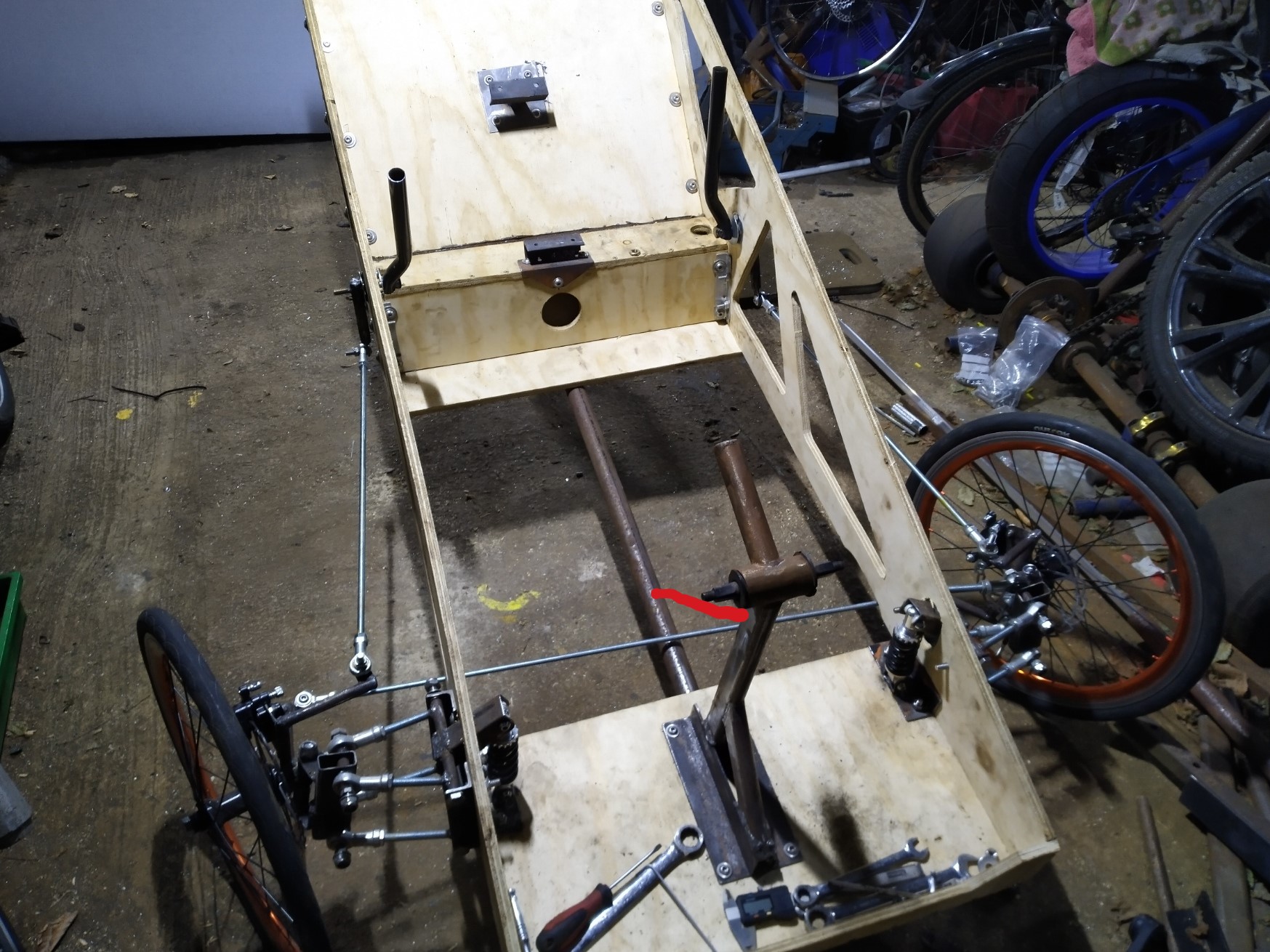 I changed the Nuvinci rear for a more regular 10 speed set-up and I now have a top speed around 50kmh (downhill obviously and with a hurricane behind me) so a much better place to be than previously. I have no idea why the Nuvinci was so low geared. I am still waiting for a dry day to trim the body properly. 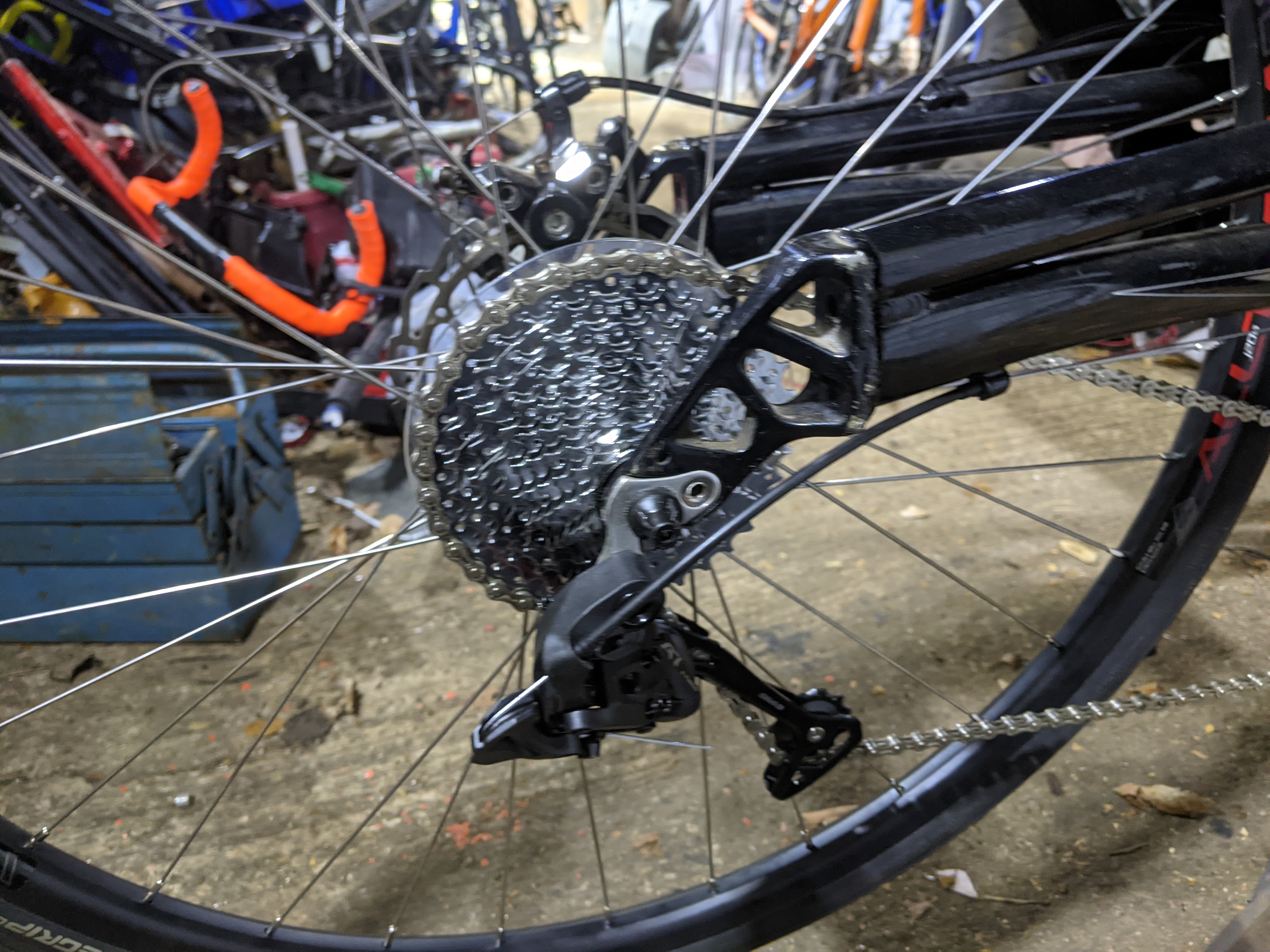 Popshot said:
I changed the Nuvinci rear for a more regular 10 speed set-up and I now have a top speed around 50kmh (downhill obviously and with a hurricane behind me) so a much better place to be than previously. I have no idea why the Nuvinci was so low geared. I am still waiting for a dry day to trim the body properly.

You had set the Nuvinci up for the full gear-range as per the setup instructions, yes?
Regards,
Dan.
Mig = Weld, swear, grind-off & repeat.
TIG = Weld, admire, clean up, use.

It certainly seemed to move the full amount and you could feel the difference in gearing as you moved it. It does seem more likely there was either a set-up issue or an internal fault rather than anything fundamental that was causing this though. The hub came with a pile of scrap so it wouldn't be unreasonable to assume it had issues. I'll return to it at some unspecified point in the future, probably.

Popshot said:
It certainly seemed to move the full amount and you could feel the difference in gearing as you moved it. It does seem more likely there was either a set-up issue or an internal fault rather than anything fundamental that was causing this though. The hub came with a pile of scrap so it wouldn't be unreasonable to assume it had issues. I'll return to it at some unspecified point in the future, probably.
Click to expand...

The setup is easy to check. Put the flats of one side of the axle in a vise.
Turn the shifter fully to high. Mark the sprocket and the rim. Check you get the correct number of rim revolutions per sprocket revolution.
Turn it fully to low and do the same.
There is a procedure for resetting the drive. Look for ParkTools and N360 on You-Tube.
Early models had 2 markings on the static/moving splines the selector goes over. In full LOW these two marks should align IIRC.
Later models N380 for example, you just do a full LOW reset to be totally sure. HTH.
Regards,
Dan.
Mig = Weld, swear, grind-off & repeat.
TIG = Weld, admire, clean up, use.

Thanks for that Danny - appreciated.

Added a brace which takes all the torque the motor can generate. I tried it for the first time for any distance and the motor is fantastic. The Tongsheng really is as smooth an assist as I could have hoped for. Previous ebikes have added the motor for simply cycling the pedals but this one adds the motor as you increase effort. A lot nicer from a first impression. The trike was a little wobbly which I later found out was at least part down to a less than well tightened swing arm - oops. I'll reduce the leverage of the bars so they need a bigger movement for the same turn to assist in control. I'm now ready to cut the screen which I'll attempt tomorrow. The screen is 2mm polycarbonate and I'm hoping a jigsaw will do it without splintering it. Once the screen's on I'll weigh it and see where I am on the weight front. 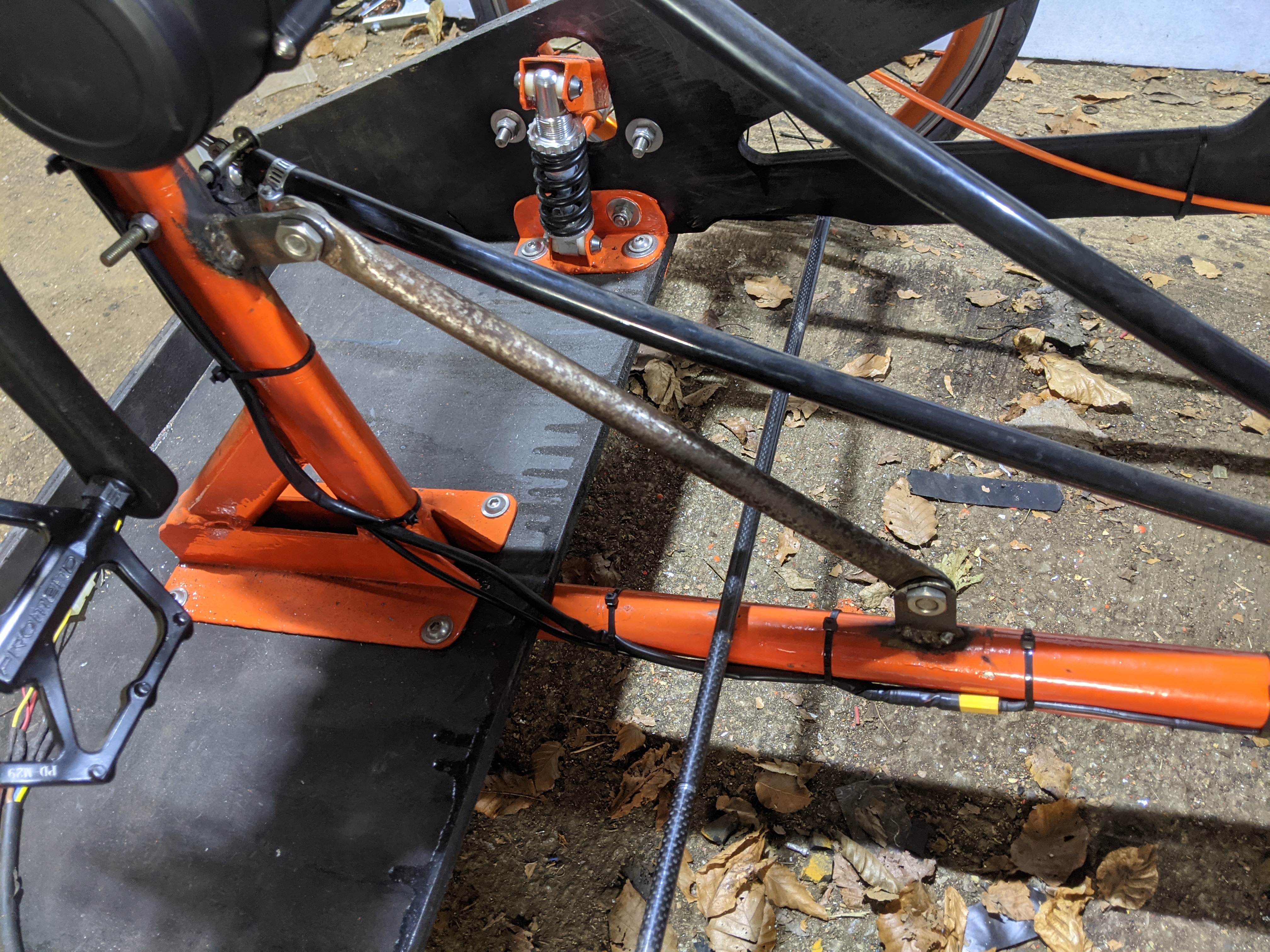 Windscreen cut and fit. It'll need a bead of silicone around the base when it goes on for the last time. I have an idea for a "roof" but it could look utterly comedic or it could look magnificent. I'll have it cobbled for next weekend and no teasers will be forthcoming until it's time to laugh at my ineptitude or admire my genius. I may need to trim the screen a bit lower to mate with the roof. That should be easy enough and will remove a bit of weight too.

Speaking of weight it now weighs in at 62.2KG against a target of 50kg for a non motorised version. The electrics weigh in at 8.6KG so I've already failed by 3.6KG. The roof (if my idea works) will add under 1kg to that so all in with a bit of extra paint and some finishing touches I'll probably miss by 5KG or more. Still, there's many a better funded effort ended heavier and that motor does move the weight well. I reckon I could hit the target if doing it again with what I've learned this time round. 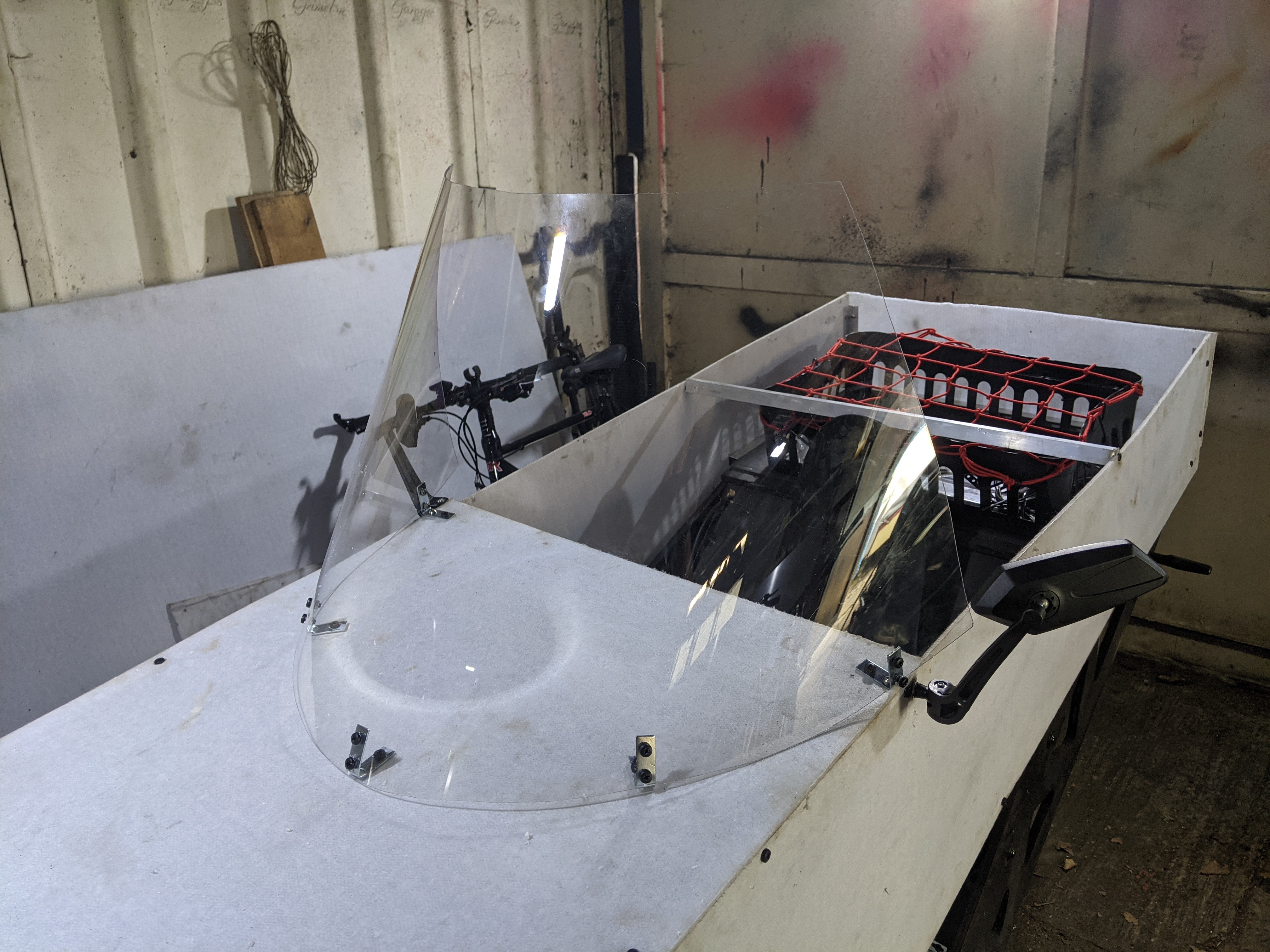 Jobs still to do include moving the motor display to the "dashboard" just inside the screen and wiring in the front light units, plus of course painting the Thermhex.

The roof arrived yesterday and here's the first mock-up. There's no actual ties holding it to the body yet - it's just mocked in place. I'll loose the see-through pvc at the front and use one fastening per side forward of the screen using the lime green edging. At the rear I'll make a cradle for the loop to sit in. It's under 1KG by the time I've lost the PVC and it's just narrow enough to store onboard by creating a full body width pocket underneath the body just above the knees. I believe I have sufficient space to loose the 20mm or so this will cost above my knees. It folds and twists like a pop-up tent. The screen seems a good height for it and the roof mates with the screen very well. The peak will catch the wind to a degree and I'll have to see how that goes. Hopefully the curved screen will mitigate any effect there by channelling any air under the peak away to the side. All for the extortionate price of £12.59. Ok, I readily concede this will not provide the total enclosure and rain cover that was my original intention but my original design looked terrible when transferred from design to reality and, like Hugh recently with his trike, I came to the conclusion that open was best when at all possible rather than enclosed and stuffy. It took me all winter to arrive at that conclusion hence the stoppage of work on it but I'm glad I did.

It's now over to the viewer to decide if I've made a comedy roof or if I'm a pioneer for the industry or neither. 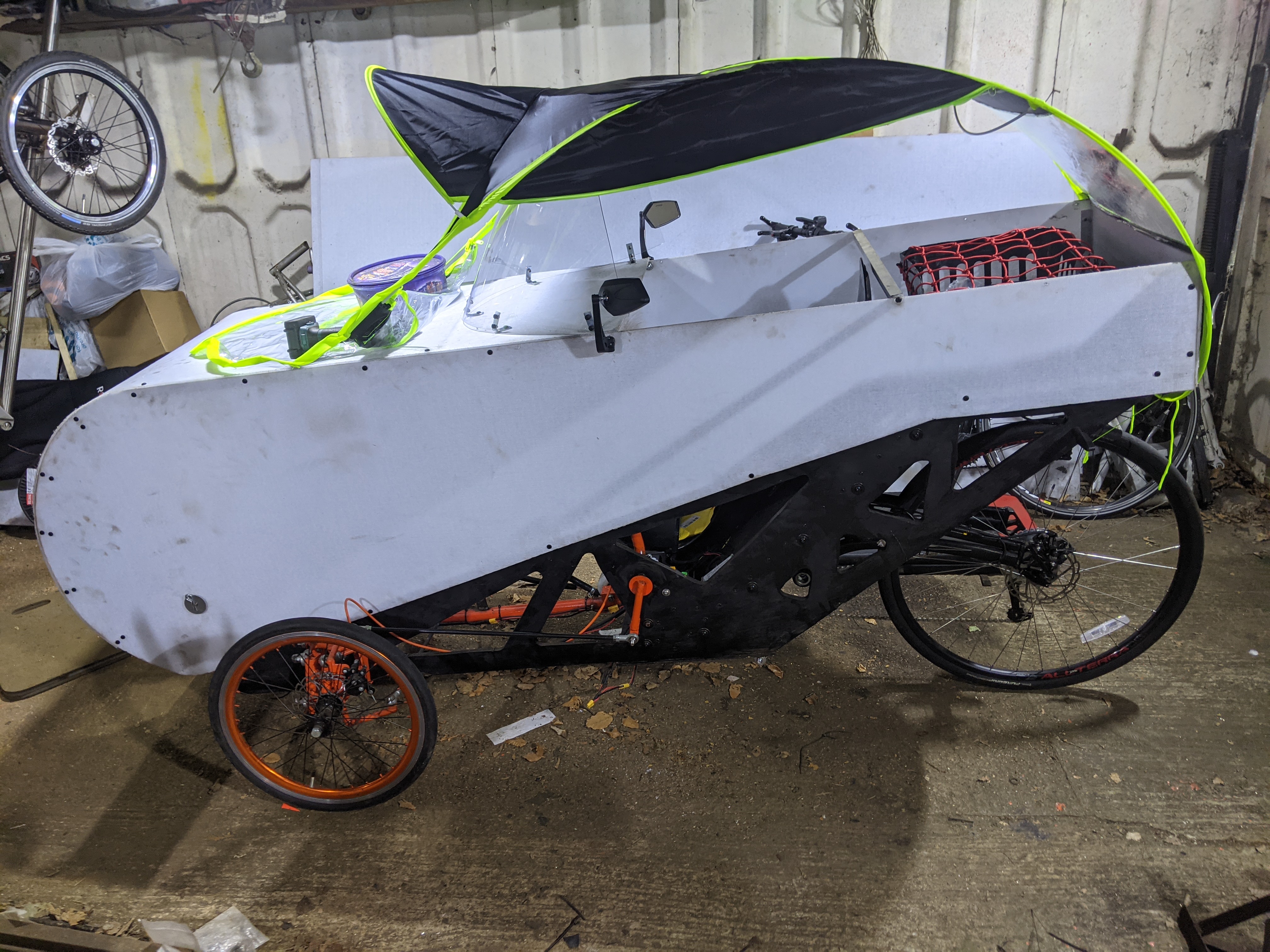 God alone knows why anyone would attach one of these to a moped as per it's designed use. 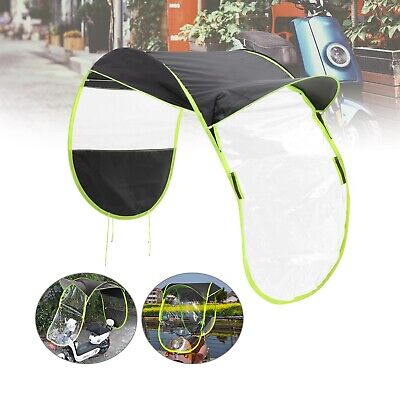 On YouTube I have seen a trike, that used that material to build a body for his trike.
I will see if I can find it.

Looks a bit like a cheap knockoff of a veltop.