The suspension works well. It's limited in travel to about 1.4" as it was designed to be to avoid excessive rolling in corners. I expect it'll soak up the worst of the bumps which it'll need to do with those ultra skinny tyres. The rod vs tube thing was at the front of my mind. I've always gone with tubes in the past and male rod ends for that very reason. I didn't think for one moment mild or stainless rod would cope so I've used M8 8.8 high tensile rod to help with it's resistance to bend and a carbon sleeve will also add further resistance. If it fails it's not a massive job to remake them, involving nothing but the rods themselves. I've noticed others going this way but I've also noted many people not being overly forthcoming about failings. If these fail I'll certainly report that back. The A frames are M10 8.8 threaded rod and have withstood me testing the suspension. I know that's not remotely the same as being in use but it's as much testing as I can achieve right now.

Chain management in. Simple enough on this trike - just one pair of pulleys. 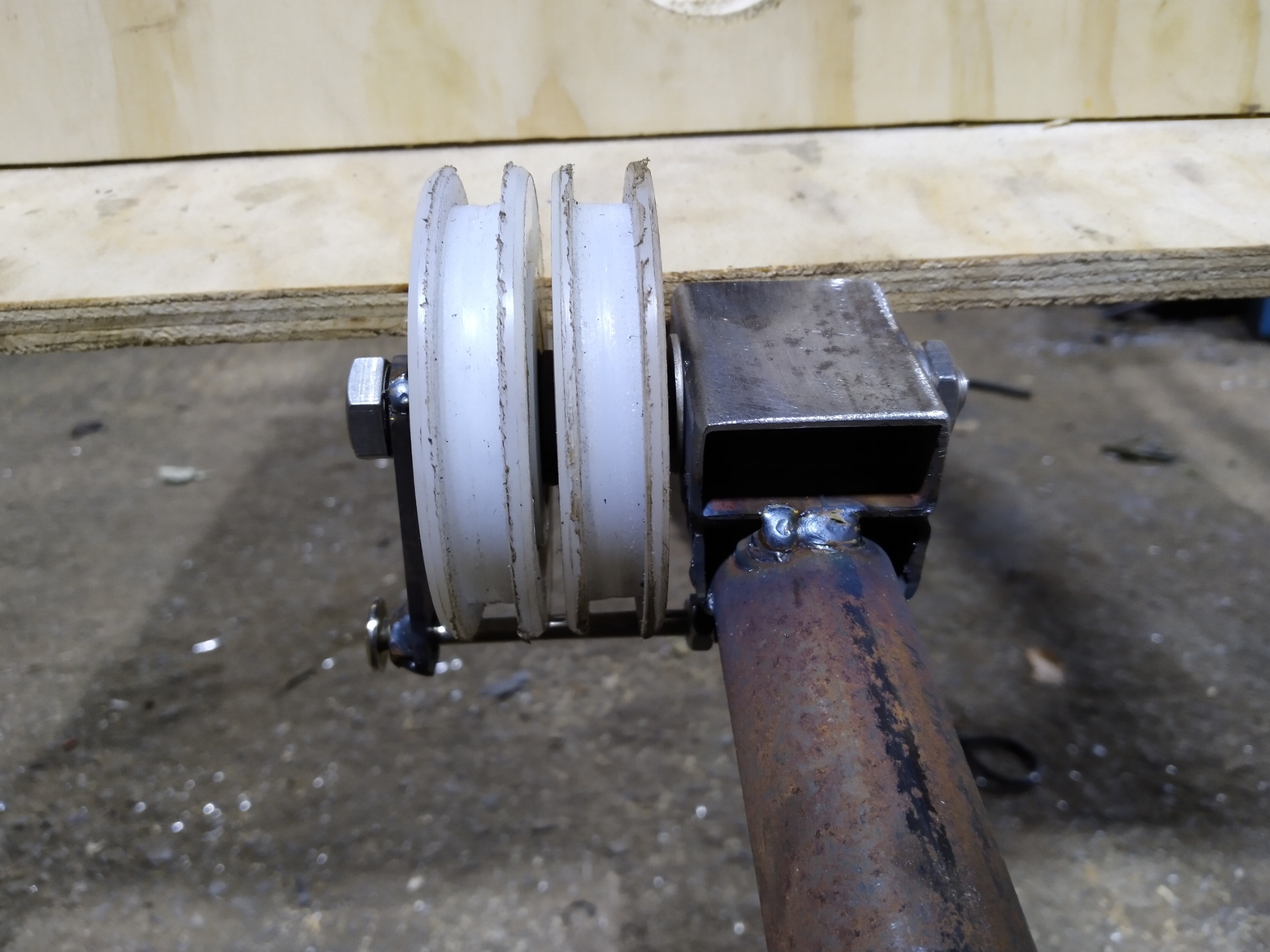 I've largely finished the main mechanicals now. Sure there's the tidying up and small tasks here and there but the main engineering is done. With the seat on this is now tipping the scales at 42.2kg though that does include 2.5kg of Nuvinci hub. With a more conventional set of rear gears you could loose 1.5kg off that. Even discounting the hub I'll be straining to come in sub 50kg now before electrification . I expect the body and canopy to weigh a minimum of 10kg not to mention all the chain, cables, levers etc. The only way to have any chance of the 50kg target from here is to switch the canopy from the design to a blown dome but then it won't open and it'll look like the Jetsons.
If there were to be a Drypod3 I'd revert to using a steel chassis from the off and use unstressed Thermhex for the jobs the wood is currently doing. I think I could shave off a minimum of 5kg that way and perhaps as much as 8kg. You live and learn. 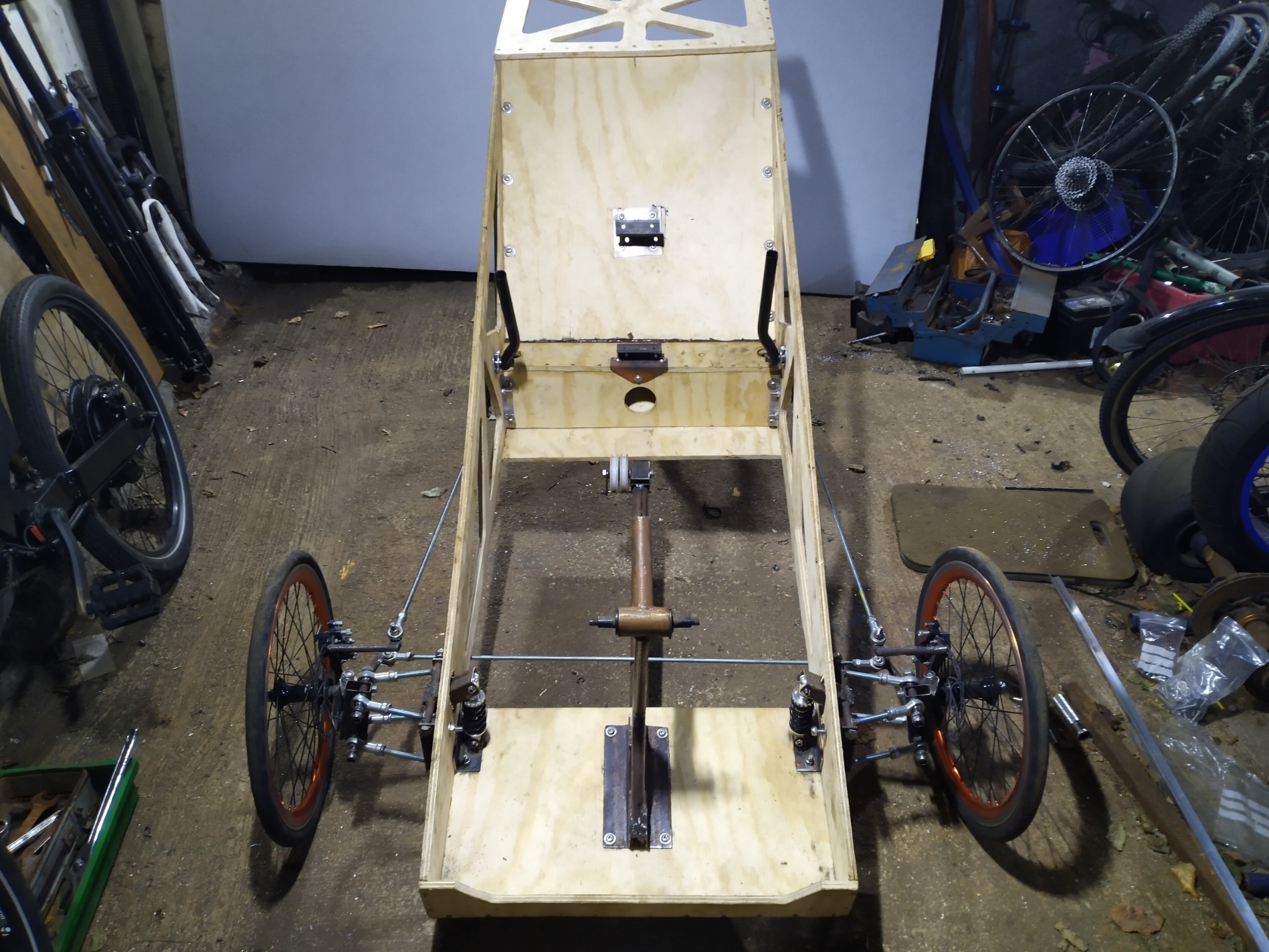 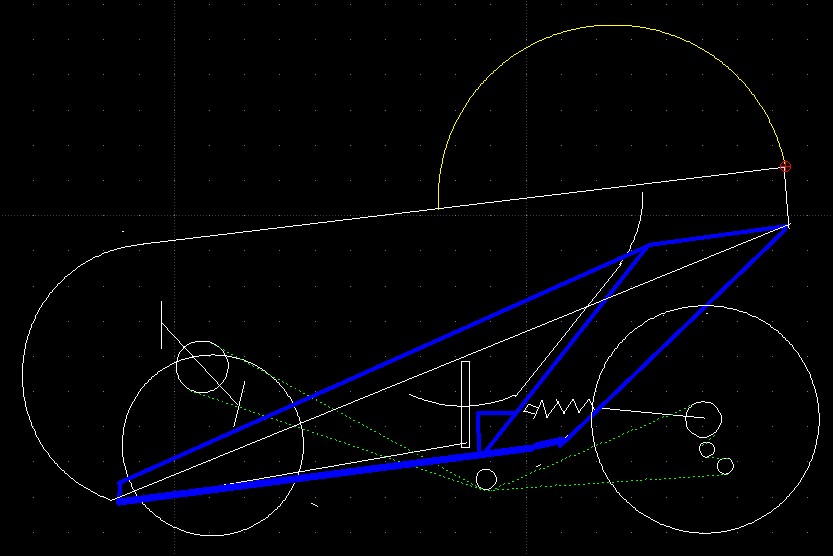 Maybe recycling an old glider for the cockpit/canopy?

I myself go for a more angular style, based on the glorious 60-70 Bertone desings, like the Alfa Romeo Carabo and Lancia Stratos Zero.

Aircraft parts are almost always a ridiculous price and an aircraft canopy would need to be strong (heavy) enough to withstand a bird strike. I could get a custom blown dome in a rectangular form for easy mounting for around £100 or just over but I'm almost certain I don't want to go that way. I think I'll just have to accept that I'm going to be over the target weight and live with it.

A glider needs to be as light as possible. And with the speeds of those, a birdstrike ain't a big deal.
But I never handled a canopy like that. Will have a look at the issue.

Popshot: I know it's a bit late now but I recently saw a couple of videos of an electric Changli (see Jalopnick YouTube channel) car that can be ordered via AliBaba. It has a front beam, simple stub axle kingpins at the outer ends, and trailing arms for front/rear locating. Coil-over suspension is used, along with what I would think is a Panhard rod for sideways location.

It occurred to me that it might suit your Drypod design, being easier to construct. If I had been able to see it a couple of years ago, I would have played around with it instead of something else I idled my time with. Hmm, I may even resurrect it. Oh dear, the list just got bigger.
Kevin - VK3CKC
https://groups.io/g/pedalradio
https://axerail.coffeecup.com/index.html
https://www.youtube.com/channel/UCP_NWH_v3GVKW-IDYVWgtWA

The bottom and functional half of the Drypod2 is all but finished. Just some cabling and basic assembly etc to do. The bodywork can then be started. The lower half will be perfectly useable without the body so I'll make an effort to make the bodywork relatively Q/R which will assist servicing etc even if I never use it without the body. The cut down laundry basket will be fastened where it is as a receptacle for cargo. I need to cut a piece of correx to sit underneath it to keep the water out as the basket base doesn't quite cover the holes. My ex has a 3D printer and is cobbling me up a hood ornament for it in the style of the "spirit of ecstasy" but this will be more "spirit of pigstysy". Pictures will follow when I get it.
I didn't see the stain runs on the front floor until I turned it over after the bottom was dry - doh. I'll cut some more correx to cover this and act as a wipe clean surface for the feet. 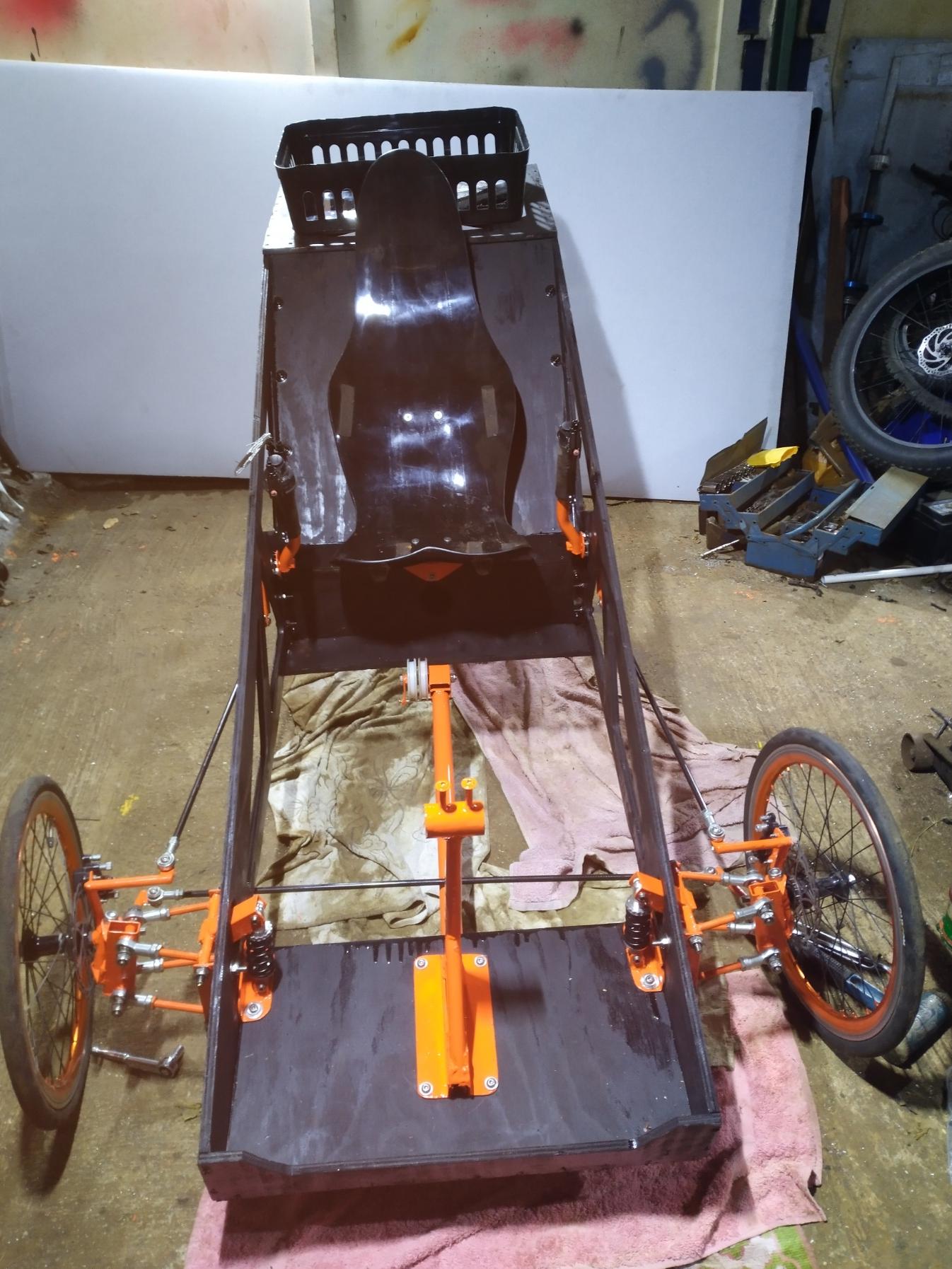 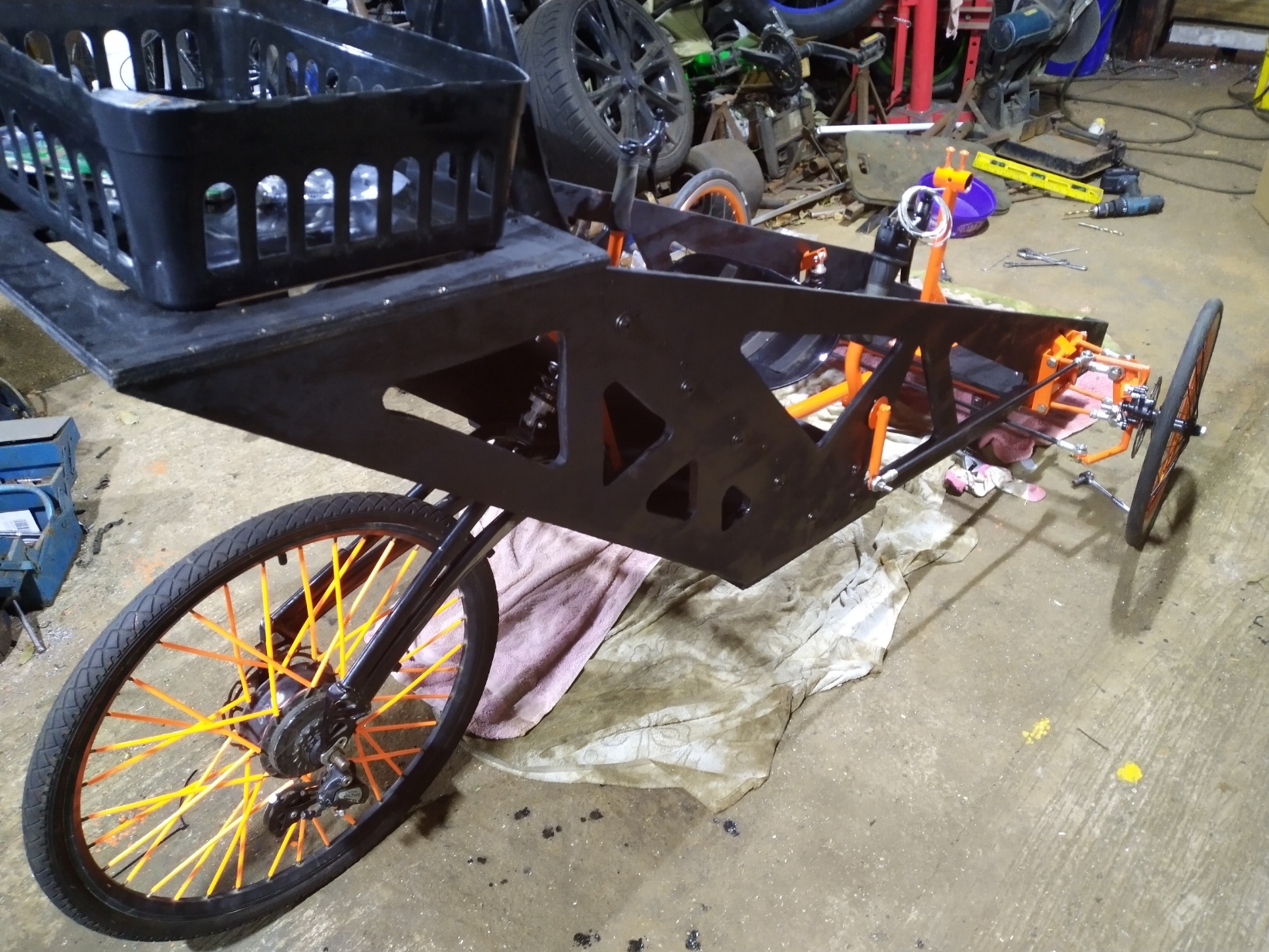 Spent hours today on the wiring for the lights and indicators only to struggle badly. The magnificent Chinese wiring diagram for the switch was wrong twice! The left / right was the wrong way round and the common indicator earth was in fact a common indicator positive. On top of that the equally magnificent Chinese quality indicator switch only made contact in one direction. Frankly no information would have been better as I'd then have opened the switch to see what went where to start with.
China and Quality are dissonant, immiscible, non concomitant and risible.
L

Did you purposely make this untranslatable so as not to start an AZ-china trade war? If so, thanks, you're smarter than Australia.

I tought that too. But it's just the question. "what did you pay for?". Because, most , even high end US and EU brand stuff, do use Chinese parts.
Also, remender if anybody would have said in the 60-70 that Japanese stuff would be rated top quality and utterly dependable, he/she would be looked at as if qualifying for the looney bin.

I fully expect Chinese quality to improve as their citizens get wealthier and themselves demand more but getting the basic information wrong is something the Japanese would never have done.

In terms of say the early Japanese motorbikes they were never poorly made, just small and under powered. The scoffing at them was mainly unwarranted and centred mainly on the designs that were what the Japanese home market needed not overseas ones.
Last edited: Nov 11, 2020

Well I was wrong. There weren't two wrongly labelled wires. There was three! Three out of 7. Pretty poor even by Chinese stds. The indicator common wasn't the common one at all regardless of it's polarity, it was the right hand one and the right hand was the common. Argh!!!
Regardless, I've now got the wiring in bar the front which will mount to the bodywork and detach via an old molex computer connector pressed into service. If I make things as envisaged the body should remove via two R clips and the multi plug.
The steady lights look somewhat amber on the video but they are very definitely red to the eye. The indicators have a nice flow to them and were only £12 the set. It appears the Chinese do make some things that work.


See how easy it is when you have a glamorous assistant.

I can now move on to that body. The first stop will be to cut a two foot wide section for the bonnet / hood area and see if that will accept being curved to an approx 1m diameter. If it will then the front end will be nicely curved and if not it'll have to be angles. Curved will look so much better IMHO.
Last edited: Nov 11, 2020

Those lights look pretty good. Any pointers on their source? I would like to have a look.
Kevin - VK3CKC
https://groups.io/g/pedalradio
https://axerail.coffeecup.com/index.html
https://www.youtube.com/channel/UCP_NWH_v3GVKW-IDYVWgtWA 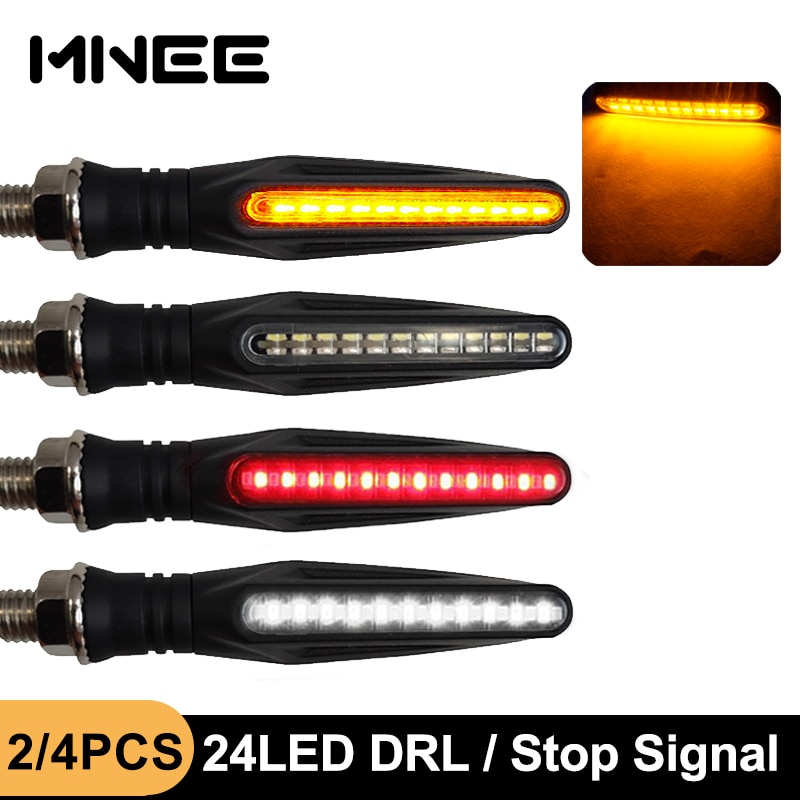 Some ads mention stop as a function but they don't do that. Just 2 x white ones for front, 2 x red for rear and all 4 do the flowing indicator thing. The white or red turns off when you tell it to indicate. Not sure whether that's to highlight the turn or because they can't walk and chew gum at the same time. There'll almost certainly be plenty of sellers on ebay and Ali-Express flogging them so you may get some cheaper.
Last edited: Nov 11, 2020

I've just realised that tipping the body up to get in and out will have the windows sliding about. A bit of an oversight that one. I'll have to ponder a potential solution to lock the windows.

Body panels cut and part assembled. This is taller than I was expecting. I was thinking my foot arc was a limiting factor but it's the knees which dictate matters more. I can't make the body any lower that that in the knee area. There's about 3.5" of spare headroom in the canopy that could go but I'm not sure it's worth the effort of loosing it. The good news is the Thermhex has enough give in it to make an effort at a curved front. It weighs little more than Correx but with much more strength. 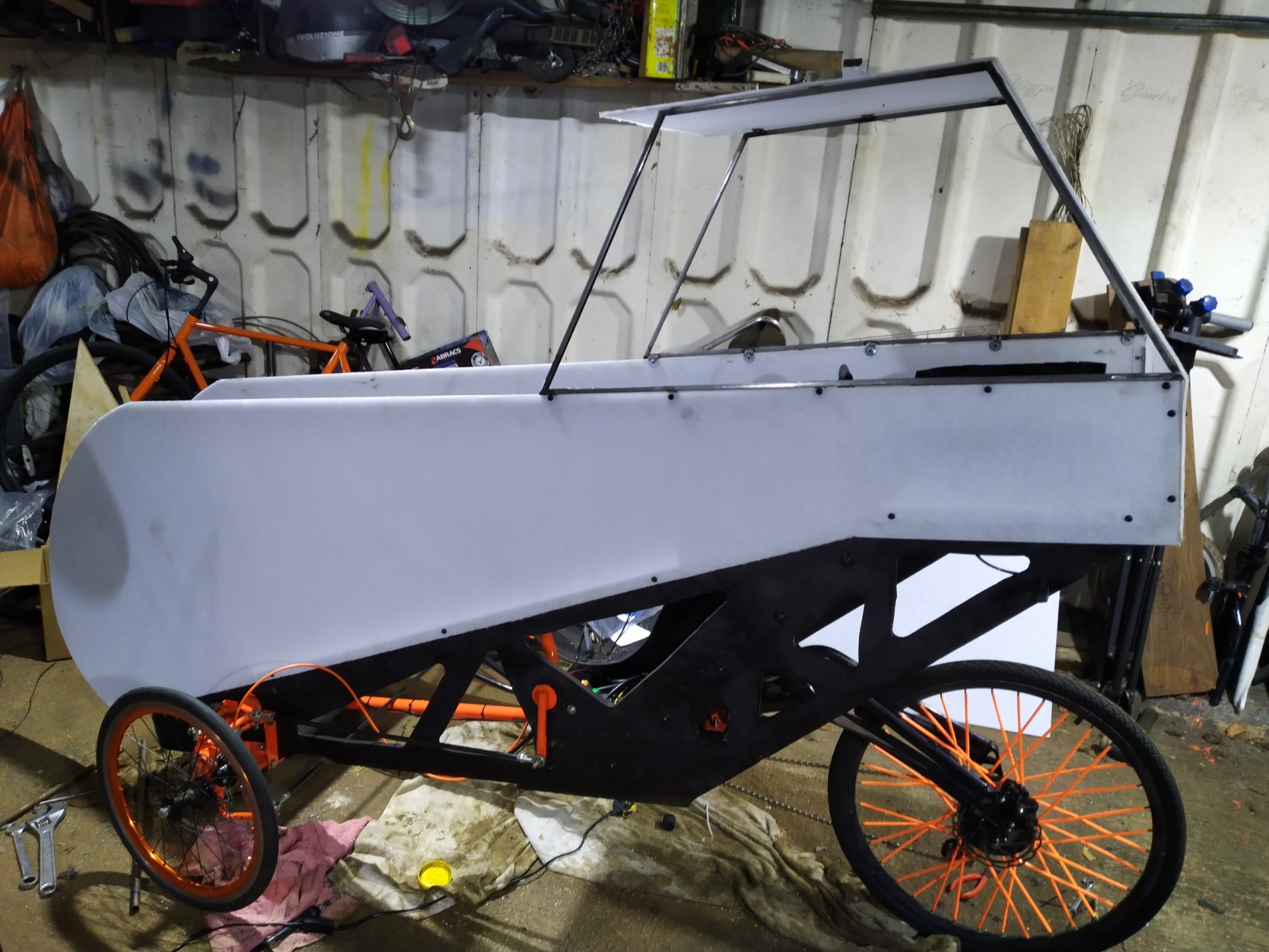 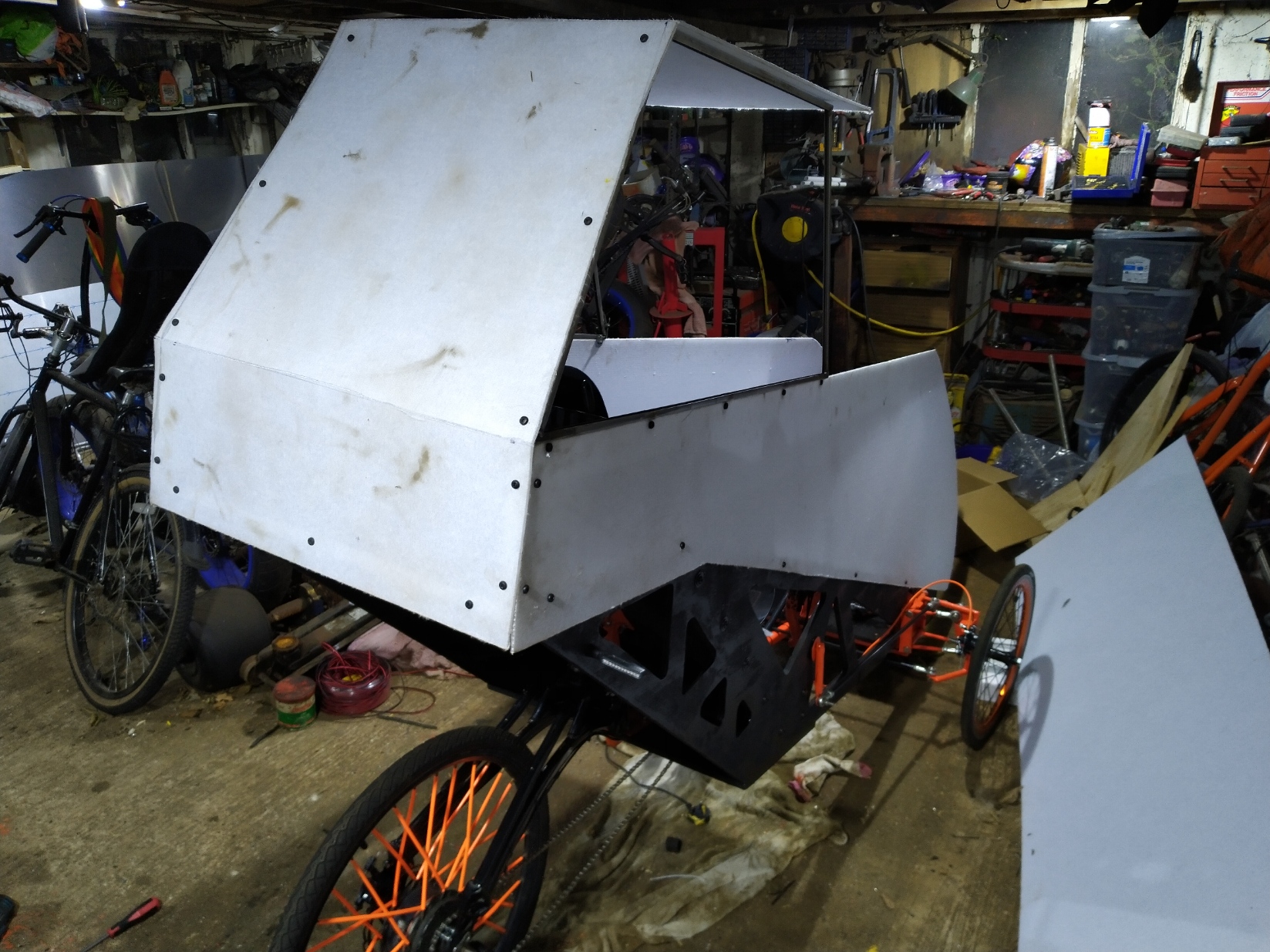 I like the orange. What did you do with the rear spokes? Do you keep the sides open, or do you close that also?

The rear spokes are just covered with spoke covers. They're like thick plastic straws and are split all the way up. They take a bit of feeding on but then the split is all but invisible.

Really starting to come together. I don't know if my observation will be relevant to your build but one thing I learnt from my enclosed delta that despite having an open floor heat and humidity were a definite factor. I was able to prevent the windshield from fogging up by leaving a small gap along the bottom of the screen. Water drips were solved by running the cowling a bit past the windscreen and putting a small bend in the coro on the inside. This ensure a bit of airflow up the inside of the windscreen keeping it from fogging up. What I did not do and now realize I should have done is provide a larger vent on the back side of the delta to allow a positive airflow through the cab.
You must log in or register to reply here.
Share:
Facebook Twitter Google+ Reddit Pinterest Tumblr WhatsApp Email Link
Top