Time to get back into building something

Now that the kids are grown up and a little less dependent - I can commute to work more often using more single person means. I started in the fall learning Electric UniCycle (EUC). It is fantastic but now laying dormant for winter and I also did not prefer to ride it in the rain though light rain was possible. So I starting research velo's to purchase -- many issues, cost the biggest. I love the PEBL and the ELF, again the cost.. So build my own.

I have always been fascinated with tilting vehicles -- but the tilt mechanism complexity always seemed to overwhelm my low engineering intellect. I think I have overcome that hurdle for the most part via someones elses intellect.

I have also always hated gears and derailers -- they are an absolute PITAss in my opinion. I found an couple of examples of generator type builds -- forgoing the traditional chain gears BS. I could just hook up a rear motor and throttle and go to town but I wanted to be able to peddle a get a bit of exercise and put back a bit of energy into the bats or have smaller pack. And having pedals gives the illusion it is a traditional bike allowing me on cycle paths.

Other things I am thinking:
--- want it as short as possible - also want the front and rear wheels to fold in / under main frame making for very compact storage or have it capable of standing on front wheels and frame - the later will be more likely
--- want a higher seat position - this is where tilt come in handy doing the corners for a higher center of gravity ride.
--- want it light as possible - aluminum but not welded, look up XYZ recumbents, very doable. The aluminum superstructure/frame will be lightweight but strong - goal is build max 80 pounds not including battery or motor. Plexiglass coverings added to give shelter and extra rigidity.

Time line -- Well I have most of the stuff to get building now. Motor from my current delta trike - aluminum tubing I got for a trailer build never started....But I have always used other plans in past builds. AZ to make the Kyoto and Thunderbolt for my 1st Tadpole I called Patrike1. This time it is mostly me. So I want to document it very well to share with others. So I am learning FreeCad to give some good drawings to work from. FreeCad will be a big hurdle for me. I am used to Paint and doing just 2D crappy drawings.

I assume the losses - generator to motor or generator to battery will make this impractical for normal use and usable speeds ?
Regards Paul ...so many bikes to butcher and so little time ....

stormbird said:
I assume the losses - generator to motor or generator to battery will make this impractical for normal use and usable speeds ?
Click to expand...

The Batteries will do most of the work -- see youtube example:
DIY Pedal Generator for Electric Bike or Trike
Be respectful to everyone - But dont take **** from anyone!

Here is my very old attempt at a gen-2-motor rig...

It was not highly efficient, but it proved that it can indeed work.

If I was to do this again, I would use a 3 phase 300 watt brushless hubmotor as the generator, as these are amazingly efficient generators.

Radical Brad said:
If I was to do this again, I would use a 3 phase 300 watt brushless hubmotor as the generator, as these are amazingly efficient generators.
Click to expand...

Was that the camper build? Do you have a link to such motor?
Cheers, Patrick
Be respectful to everyone - But dont take **** from anyone!

A shorter version -- Putting front wheels under the frame and this being a tilt the height is not too much of a worry - I wanted more height - also makes getting in and out easier. 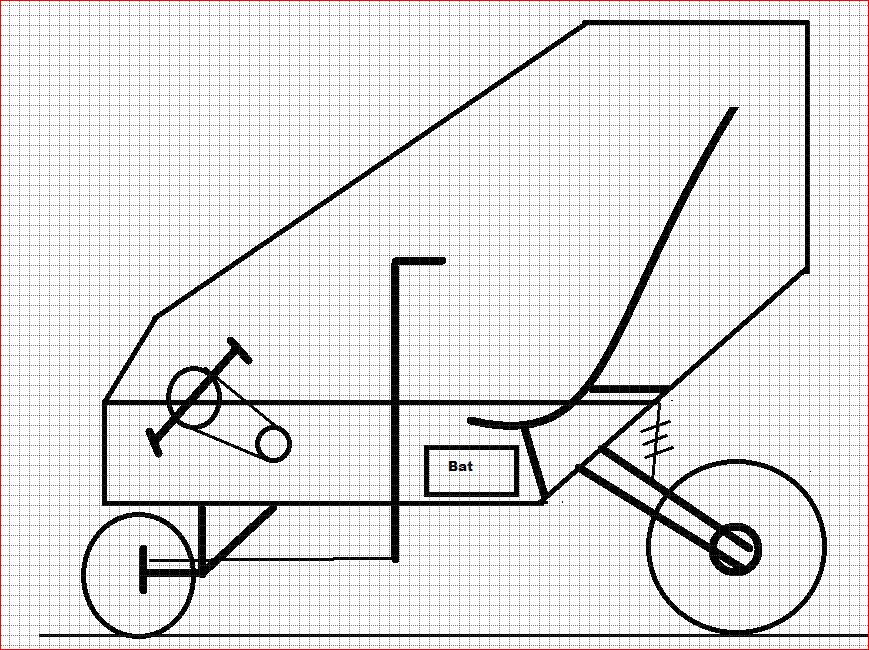 A great vid of gentleman studying tilt for his Velo build- he is still in the design stage
Tilt study
If I go under the frame I will look to do a compact version of this: 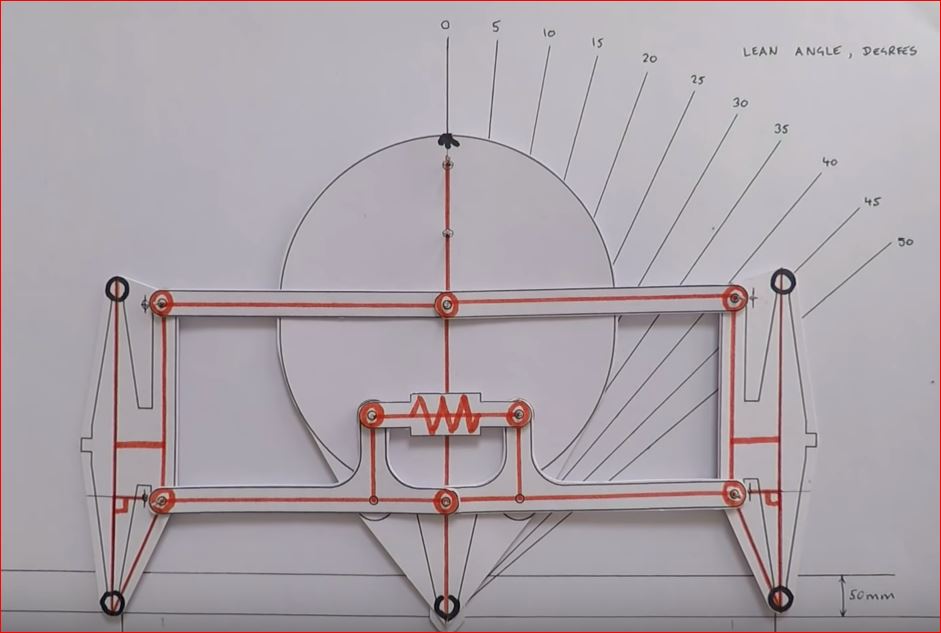 If I go in front I can do an ideal layout like this: 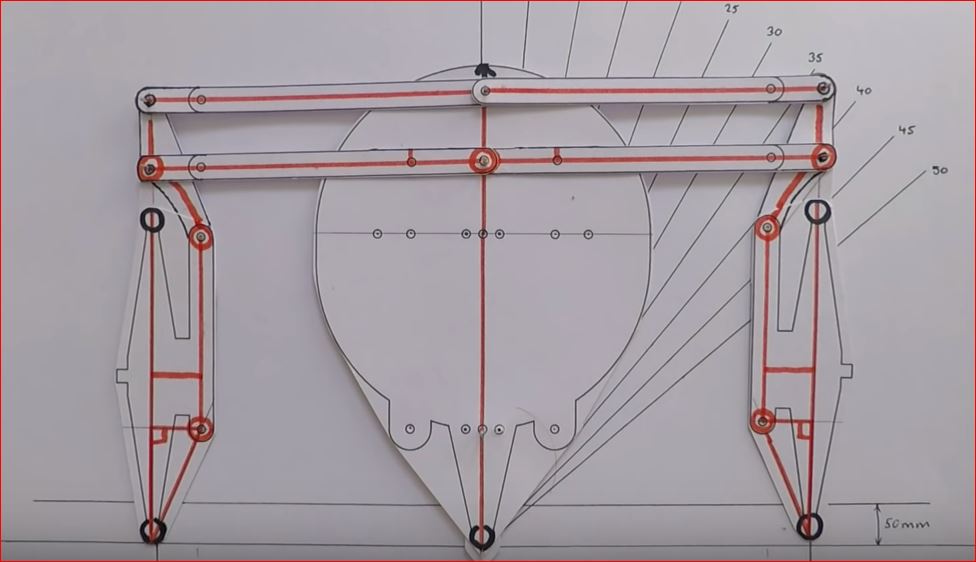 What mechanism actually controlls the lean? From the video there isn't any mechanism bar the rider, just like a bike. Perhaps that will work with a more upright design but it's very hard to make it work as you go more recumbent. I found I simply got flop with that method and ended up off the thing but as said that was a much more recumbent design. Equally I could have simply got something fundamentally wrong! Have a look at the Sway. It uses the leverage between the hands which lean and the feet which don't as a method of lean control. That mechanism also negates having to get your foot down at a stop which may be usefull when trying to enclose things in a body. Once you add steering into the equation you add in a new set of variables. The steering arms ideally need to use the same pivot axis as the wishbones. They also need to be parallel to the wishbones too. If you don't have both of those you get bump steer. That'll probably mean Kart like steering at least at the wheels end of things. Packaging, as much as anything else is likely to sway your choices. You'll probably have a lot of components comming together in a small area.
When doing your wishbones don't use cheap M10 male rod-ends. They're not butch enough and bend - both direct experience and also from others. When bend comes to snap it's not fun.
I look forward to seeing you evolve this.

That is a fantastic question - one I might not get answered until I have most of the tilt together -- I think I might do a scale mock up. As mentioned in the vid - nothing stops this from falling over unless there is a tilt lock. If the steering control arm is attached it only rotates the wheels left and right but balance is obtained when forward motion is initiated. Many years ago I rode a tilting trike - just like a regular 2 wheeler you fell over until you got forward motion. Turning the wheels the trike leaned into the turns almost intuitively.

Also - my understanding is if I have tilting I dont need to worry about the Ackerman setup????

If you have a link to some quality rod ends that would be great -- on my original Tad, I just used cheap ones from Princess Auto but they seem to hold up and I put them through a good beating.

Popshot said:
Have a look at the Sway. It uses the leverage between the hands which lean and the feet which don't as a method of lean control.
Click to expand...

I have looked up almost ever example out there I could find. I love the Sway! Could not find closeups of the steering setup. Others I liked and very curious about how they work are ones like TreGo and AddBike -- they are just attaching to the forks of a 2 wheeler and working. They look like they just have the basic setup I would use shown above for under configuration.

There may be times when you wish to lock the tilt and use it as a regular trike such as riding slowly around a pedestrian area. You may be wanting correct steering then. If you don't envisage this then I too believe Ackermans are of far less importance during tilt.

Wow, you have set yourself quite a goal. I will for sure follow this. There is another trike called the RAHT Racer being designed in the States that uses a generator setup. It's goal is street legal though and highway speeds.

Hugh said:
Wow, you have set yourself quite a goal. I will for sure follow this. There is another trike called the RAHT Racer being designed in the States that uses a generator setup. It's goal is street legal though and highway speeds.
Click to expand...

Thx -- I believe I saw that one.
Another Bike example -- Electrom
Be respectful to everyone - But dont take **** from anyone!

One thing I did not consider if I put the front tilt wheels under the SuperFrame (SF) is clearance during tilt.
You want to be able to tilt at least 35 or more % so it is looking more likely to have the wheels in front. 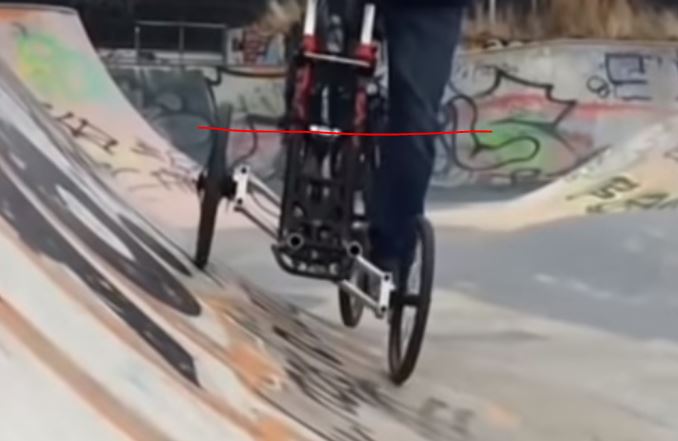 Be respectful to everyone - But dont take **** from anyone!
P

eZee e-bikes has a model worth locking at

pegasus said:
eZee e-bikes has a model worth locking at

Thx -- not sure I seen the brand before -- I have seen that style of tilt. Wanting to do a Tadpole vs a delta, changing that style of tilt to work on the front is even more complicated from what I have seen. The nice thing about that style tilt is when you put on the brakes(on tilt wheels) it wont tilt anymore as it vents the up and down movement of the tilt arms.
Was looking at this Gents ride for that example -- Daniel G
Unit stopped 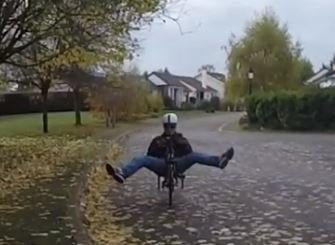 EV4 is the brand I was seeing with arms in front and back -- complicated! - but nice looking

EV4 has a , what I am going to call the, "Standard tilt' as well. A little wide for my taste but it looks effective. If you watch the vid at the beginning when they tilt back and forth, looks like very little tire scrub.
The steering setup is what I was most interested on this one. Very convoluted in my opinion and unit is 103lbs(47KG)with bat. But who am I to criticize being someone who has not designed one 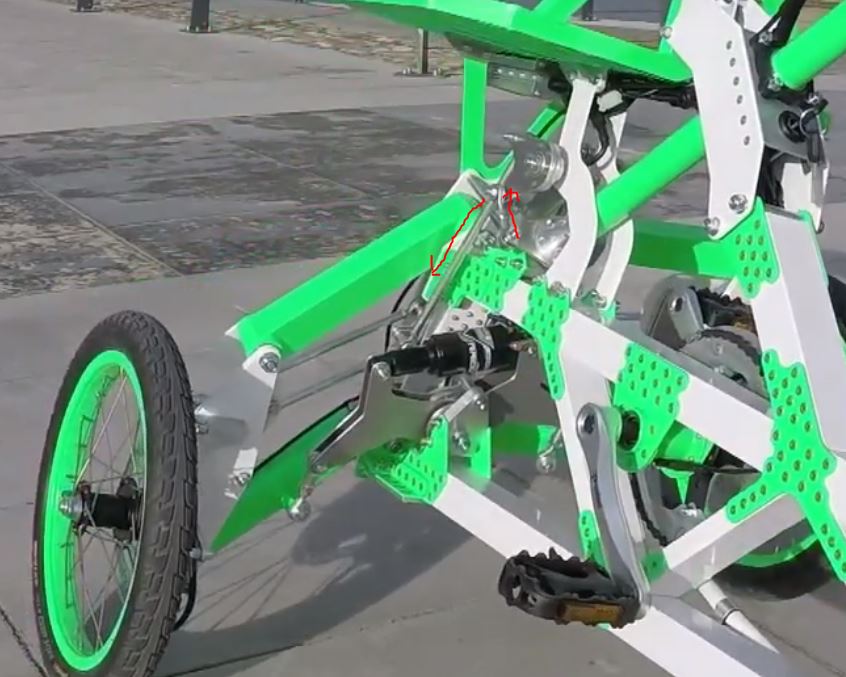 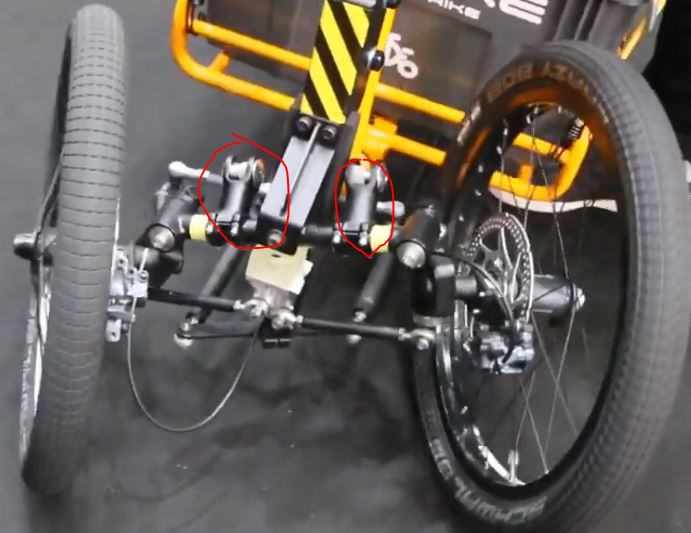 Their front ends look as if they would rise and fall as the machine tilts. Can't see what their rear is connected to but the could contain some sort of elastomer or spring based mech for anti roll control.
Kevin - VK3CKC
https://groups.io/g/pedalradio
https://axerail.coffeecup.com/index.html
https://www.youtube.com/channel/UCP_NWH_v3GVKW-IDYVWgtWA
You must log in or register to reply here.
Share:
Facebook Twitter Google+ Reddit Pinterest Tumblr WhatsApp Email Link
Top