Oh, and added a rear to the box and a middle brace to keep it nice and solid. It worked great. If it looks wonky, it's because the rear rack support is off at the paint shop! 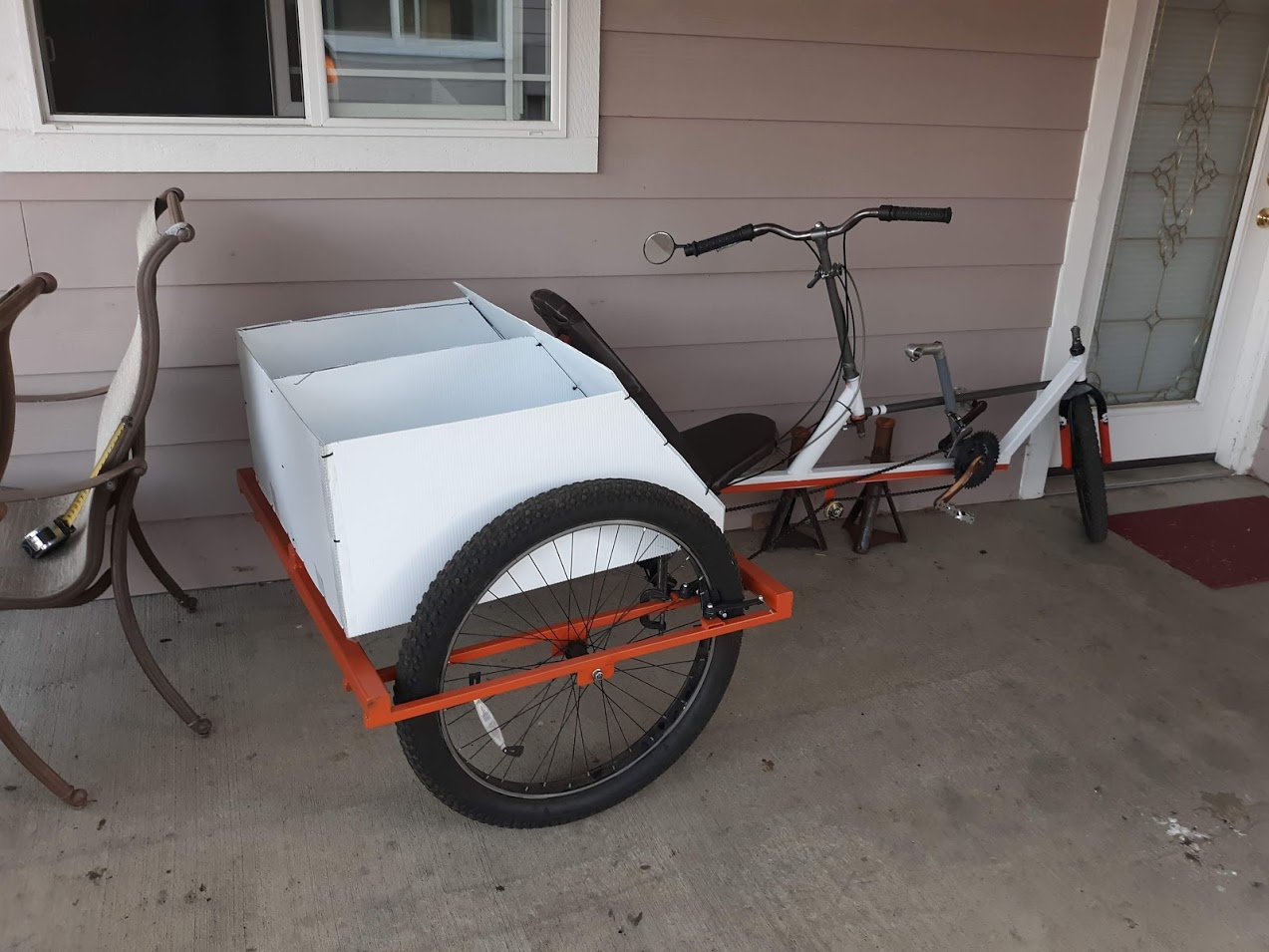 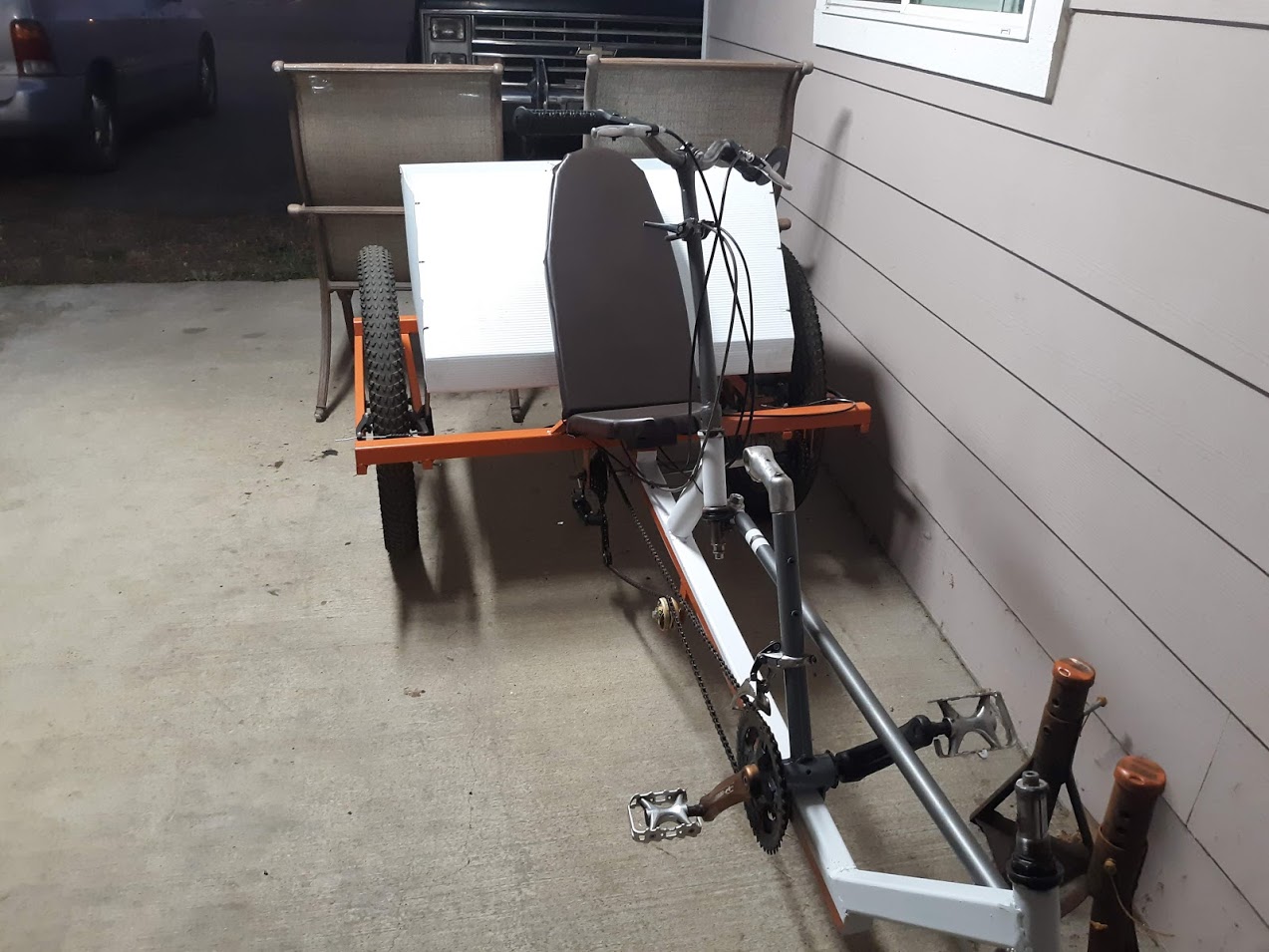 Just catching up on the forum.... your ride is lookin' great!!

Looking good.
What color will you give the box?

It'll be white, the same color as the coroplast. It's being sealed with packing tape, which doesn't take paint too well. This box is also probably temporary, as it hasn't really turned out the way I'd like. More pictures later this week.
Ryan - Elma WA
I go by "geocrasher" everywhere else
Instagram: https://www.instagram.com/miscdotgeek/
Blog/Website: https://miscdotgeek.com
E

As you ad flaps to it, you can fix it togheter with heat.

I've reached a stopping point that I am happy with, and I can call it "Done", at least for now. The rest will be fixing any issues (like the jackshaft) and adding all the lighting etc. I went for a 1.6 mile ride today- the longest yet! And it did GREAT. I'm still getting used to it being a trike- not leaning on corners is weird!

And it's always the kids that make the comments. "I like your bike!" or "What kind of bike is THAT!?"

After I got home from the short ride, I got a few pictures, and made a video too. Here's a pic: 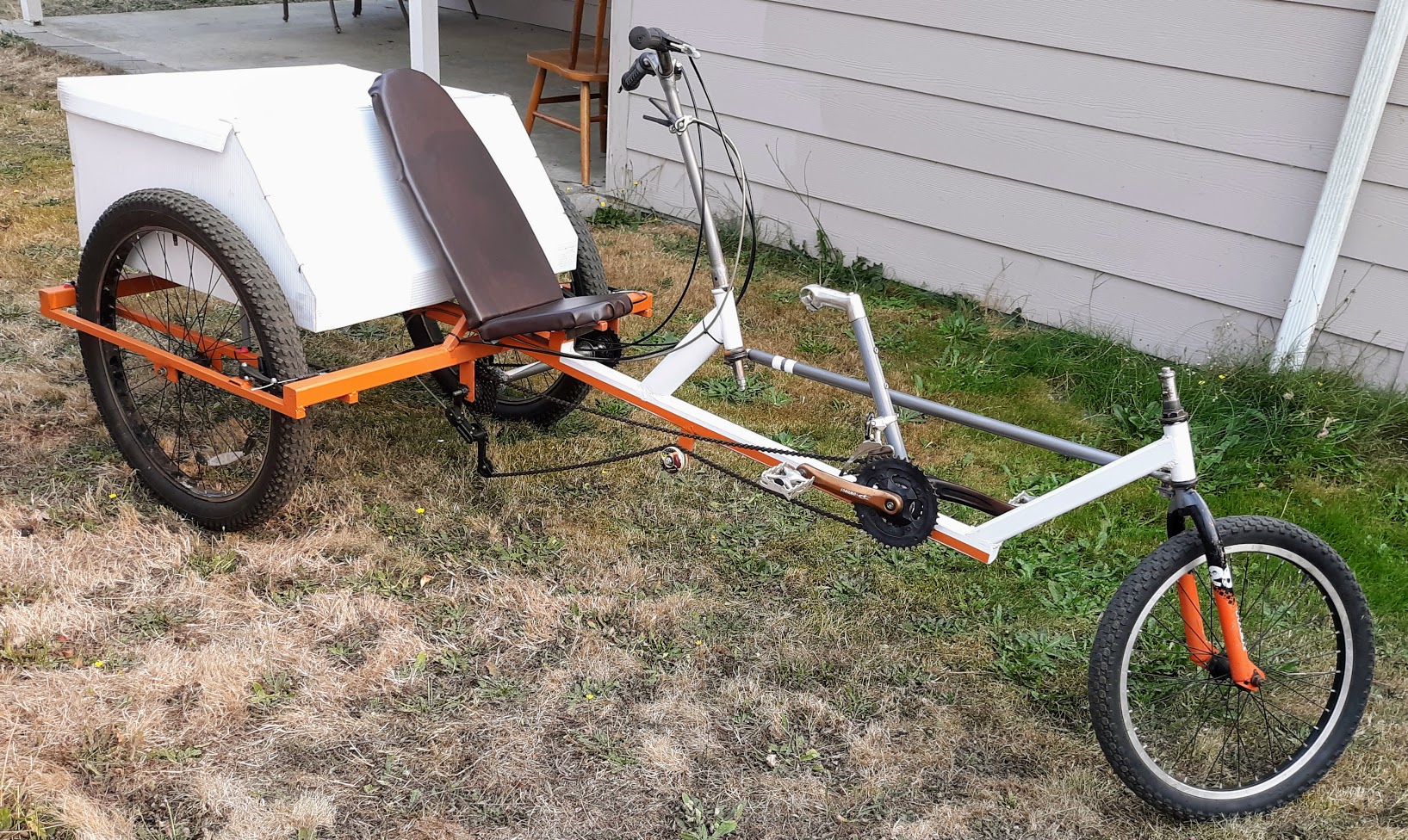 I ran out of coroplast to make the rear fenders, but I'm not sure if I'll need them. I have enough for a simple front fender, which I'll get to soon.

Some notes from today's ride:
Thanks for following along!
Ryan - Elma WA
I go by "geocrasher" everywhere else
Instagram: https://www.instagram.com/miscdotgeek/
Blog/Website: https://miscdotgeek.com
E

I don't see the need for rear fenders. I don't think that you get dirty from them.

You will get used to it and your legs also.
You will notice that you will not have those heavy legs as on an upright bike after a long ride.
Also waiting for trafic lights or just a stop and not needed to put your feed on the ground if keep balance is so nice.

Get used to the attention, because that will happen a lot. Many people look ad me and as I park in front of a store to get food, then there are often people around my trike.
I met a few recumbent and velomobile riders as I was riding around and they all safe and say hi.
You are now part of the special groep.

For long rides, don't be surprised as you notice that you can ride for longer distances with higher speeds. I drove a long trip and after that I feld still great, where with my upright, I would be tired and feel my body.

I recall my first recumbent (a Meridian) was so very comfortable, I really enjoyed it. I'm excited to have another. My goal is to ride 2 miles a day at the start, working up to 5 miles a day soon and eventually 10!
Ryan - Elma WA
I go by "geocrasher" everywhere else
Instagram: https://www.instagram.com/miscdotgeek/
Blog/Website: https://miscdotgeek.com

One is reminded of mudguards (fenders in some parts of the world) when one rides on wet surfaces. However, it is only a problem on wet surfaces. I would test it.
Kevin - VK3CKC
https://groups.io/g/pedalradio
https://axerail.coffeecup.com/index.html
https://www.youtube.com/channel/UCP_NWH_v3GVKW-IDYVWgtWA

I did a video walkaround if anyone wants to have a look:
Ryan - Elma WA
I go by "geocrasher" everywhere else
Instagram: https://www.instagram.com/miscdotgeek/
Blog/Website: https://miscdotgeek.com

Good ride. Good show-and-tell video. Congrats. Makes me anxious to get back in and finish mine. Each passing day brings me one day closer to it. I wish I knew what day that is.
Kevin - VK3CKC
https://groups.io/g/pedalradio
https://axerail.coffeecup.com/index.html
https://www.youtube.com/channel/UCP_NWH_v3GVKW-IDYVWgtWA

About testing in rainy conditions- I'll have plenty of opportunity. My locale gets an average of 69 inches of rainfall a year! I did manage to find enough leftover coroplast to make fenders, so that'll be a project for this weekend.
Ryan - Elma WA
I go by "geocrasher" everywhere else
Instagram: https://www.instagram.com/miscdotgeek/
Blog/Website: https://miscdotgeek.com

In non-wet, off-road riding, my tadpole is fine with only the occasional bit of sand flicking up. However, in the wet there is a muddy slurry continually firing onto my hands and I can't do anything about it. Steer off the straight and it then throws up onto my body - and anywhere else where the wheels are pointing. But as I said, like defective windshield wipers, it is only a problem when it rains and is out of mind at other times.

I rode on a sealed surface a few years ago and it started to rain. The rain didn't really worry me but water was thrown up by the front tyres. That which wasn't forced onto my hands or onto my body when steering, went up in the air, only to fall as extra rain.

I was thinking that you may find some spray thrown up onto your elbows if you don't keep them close to your side.
Kevin - VK3CKC
https://groups.io/g/pedalradio
https://axerail.coffeecup.com/index.html
https://www.youtube.com/channel/UCP_NWH_v3GVKW-IDYVWgtWA

I agree- it needs fenders, and it's going to get them. Unfortunately the air quality today is listed as "Hazardous" and so I'm staying inside and trying not to breathe, let alone go for a ride or even work on my trike. Even so, my lungs hurt. Ugh. Stupid fires.
Ryan - Elma WA
I go by "geocrasher" everywhere else
Instagram: https://www.instagram.com/miscdotgeek/
Blog/Website: https://miscdotgeek.com

Took it for a spin today and ran a couple of errands. All was well, even had some nice conversations and answered a lot of questions when I parked it outside the local market! Unfortunately the jack shaft gave way again, and so it needs to be fixed. But, it's fixable and I can figure it out. Will just take a bit of trial and error here. Not a show stopper. I'm hoping to have it solved soon 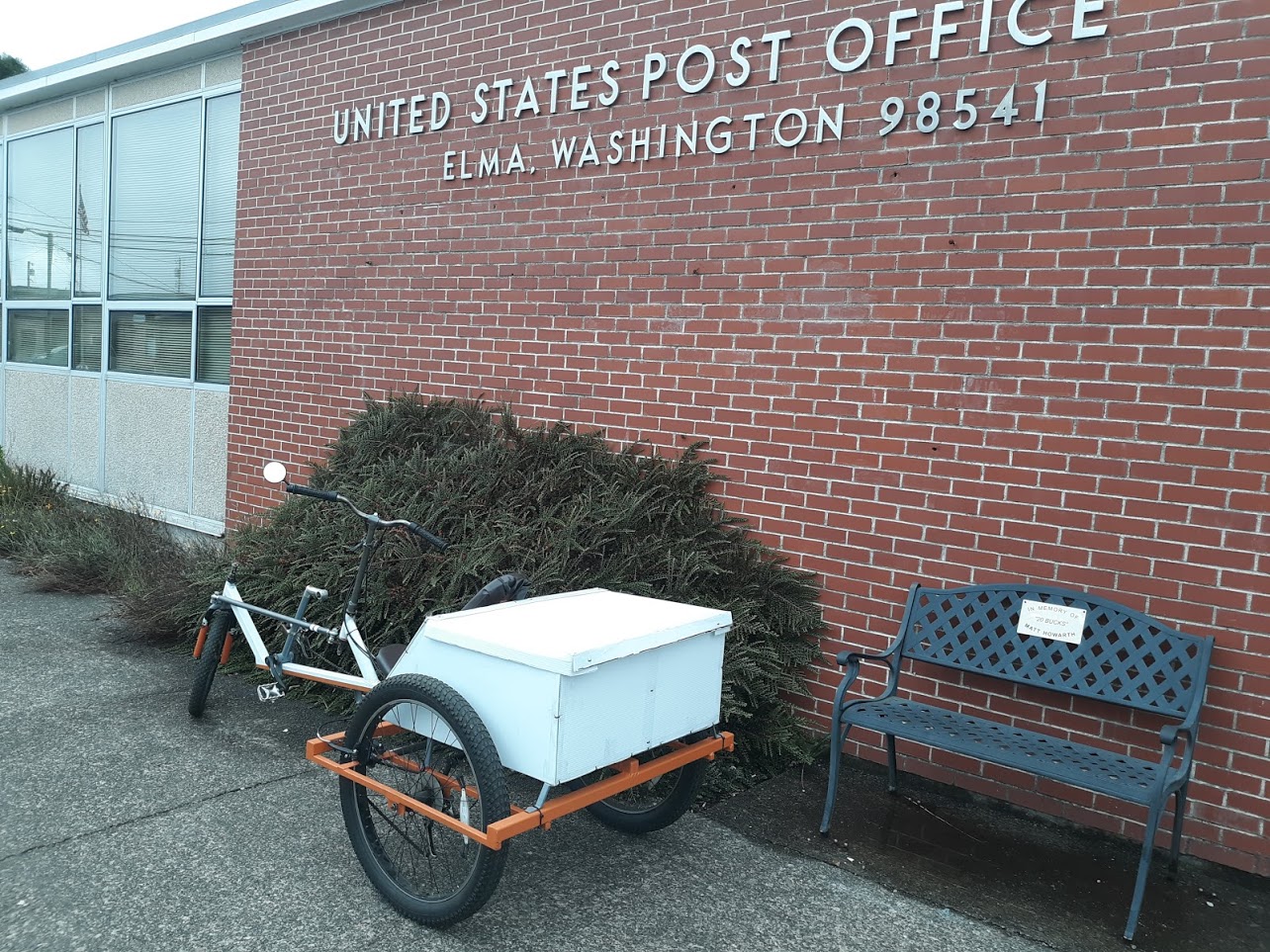 Spent some time this afternoon getting the jackshaft situation sorted out. The very area where the weld broke is the same joint where the wobble is introduced. I was able to use percussive persuasion to straighten it out. Once it was straight, I removed the jackshaft from the bike, took it to the welder, and tacked all the way around it, starting at 0 degrees, then 180, then 90, then 270, then in between those, so as to not introduce more distortion. It seems to have worked! Took it for a ride, and powered as hard as I could up a hill, and it held. Next is lighting and a bicycle computer of some sort.
Ryan - Elma WA
I go by "geocrasher" everywhere else
Instagram: https://www.instagram.com/miscdotgeek/
Blog/Website: https://miscdotgeek.com

Great to have something working, isn't it? I actually went for two short rides today. Funny how the working of things change from one ride to another. The front chain came off the mid-drive twice under assist load despite working fine for many months previously. The derail pulley was moving too far inwards, causing the chain to fall off on the "inside" of the lowest gear. Fortunately, I made the slider shift mechanism with adjustable end stops.

At what point during the weeks/months of down time did it conspire to get out of adjustment? Time for a general service.
Kevin - VK3CKC
https://groups.io/g/pedalradio
https://axerail.coffeecup.com/index.html
https://www.youtube.com/channel/UCP_NWH_v3GVKW-IDYVWgtWA

Yes it's a wonderful feeling to have it working so I can ride it around. I have missed riding so much, it's been a decade since I last rode! I did also find that I forgot to put a lock nut on the steering headset! Minor issue to fix
Ryan - Elma WA
I go by "geocrasher" everywhere else
Instagram: https://www.instagram.com/miscdotgeek/
Blog/Website: https://miscdotgeek.com
You must log in or register to reply here.
Share:
Facebook Twitter Google+ Reddit Pinterest Tumblr WhatsApp Email Link
Top