Ahoy from the Pinetree state

I've been visiting this site off and on for the past couple years after I've taken a renewed interest in using my bike more. A few years ago I would've replaced my decent 2 wheeled bike from a department store I have had since early highschool with another one, but at the same price point it was originally all the newer bikes didn't have the features I liked about my current bike (handlebars, shocks, etc.) since they were all basic models and anything more like what I wanted the price went higher fast.

Since then I've been looking more into trikes and even velomobiles as the two main problems to riding more are the fact I live in a very hilly area, and I'd rather not get wet just to ride around (I've already came home soaked more than once by misjudging the clouds). I'm interested in adding a motor but Maine laws are a bit undefined still in regards to ebikes so I'll be sticking with pedal power for now with the only modification maybe being 2wd until things develop further.

I'm thinking about picking up the Timberwolf plan since I want to be situated high up enough to be seen by traffic easier on the roads I'll be riding it on (even with flags), and the Streetfighter Quad has a plan specific for 4 wheels but it looks like majority of the parts for the rear are the same as the Timberwolf (other than lacking suspension) so I was thinking one of the tadpole designs (Warrior?) would provide the same front-end design that I could use to make the Timberwolf into a Quad. (If not then I'll pick up the sfquad plans)
I'm not sure what other 4 plans I would get and if any of you have a suggestion I'd appreciate it. If the bike-camper plans were on the site I would probably put that on my must have list, but I know making those kind of plans and testing it takes time

Also if anyone has information on what the average material cost for the Timberwolf that would be pretty helpful for planning things. I searched the archive forum a little and for a similar build I saw some prices, but many of those were estimates from 6+ years ago.
W

Okay so I think I have a good list of what I want to buy:

Timberwolf for the rear suspension delta trike design.
StreetFighter for the front steering design with overseat steering hookup away from the wheels
Warrior for a lower tadpole racing trike, front steering design with underseat steering near the wheels
Marauder lowracer for a bullet style bike, with the previous plans should be easy to turn into a tadpole design.
Viking Tandem for the tandem hookup and long design made to handle a person's weight if not more
Transporter Cargo bike for upright seating, kickstand, and support placements for a deck.


Unless there's anything redundant about what I'm aiming for in each plan (Warrior/Viking similarities?) or a different plan that may be better I'll take the plunge and start to source materials
W

With my suggestion post revealing plans for a yard tractor I'll hold off on doing a purchase quite yet; however, I feel like I should share what I currently use to do some of the work the tractor could easily replace 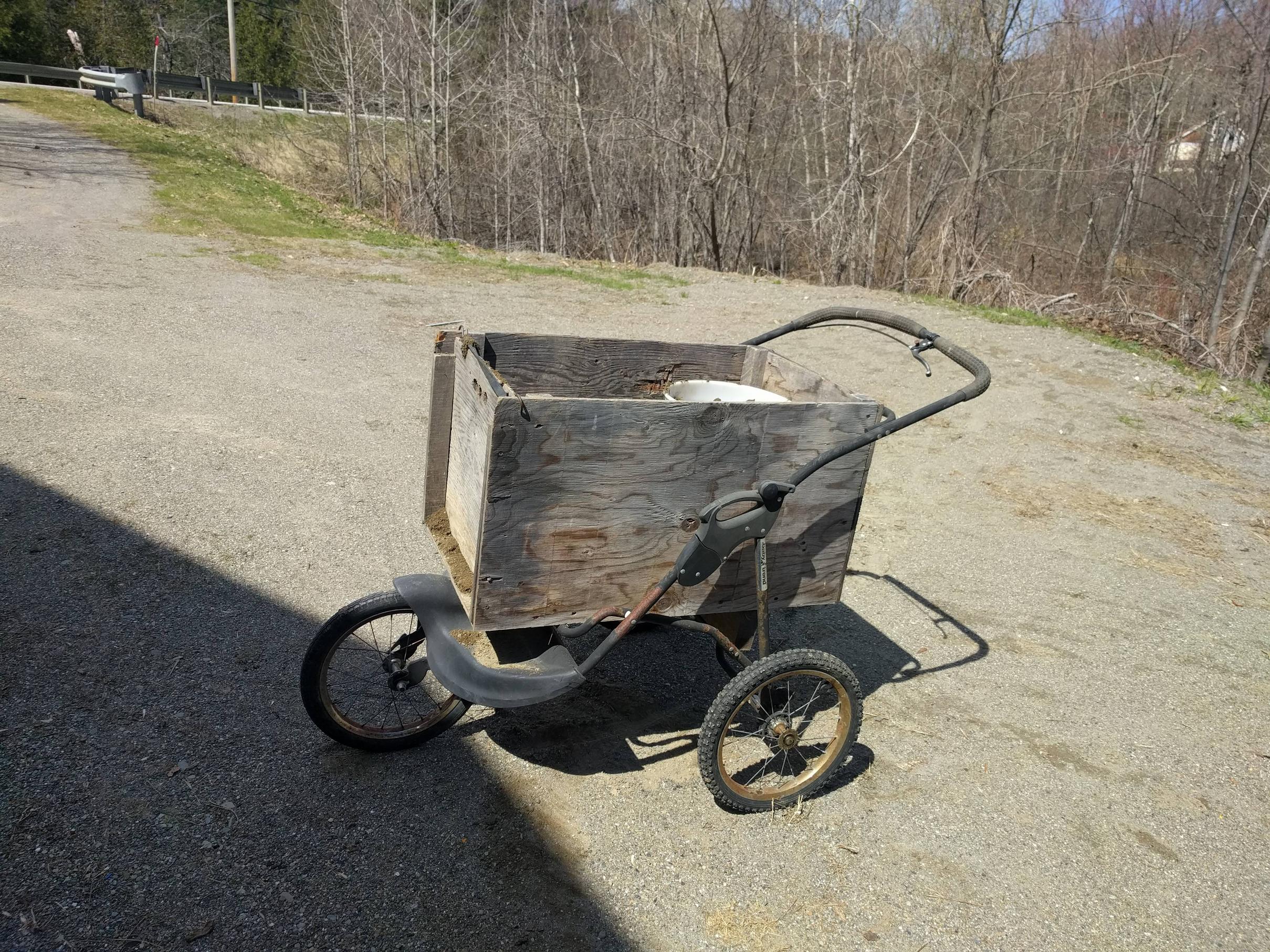 First up is a heavy duty baby stroller that was made for two children converted into a simple cart. No simple way to dump the contents other than pushing it up and removing the front panel so it's convenient for small things you need to carry/shovel out, or light stuff you can dump. The stroller base was pretty heavy duty so not much modification was needed 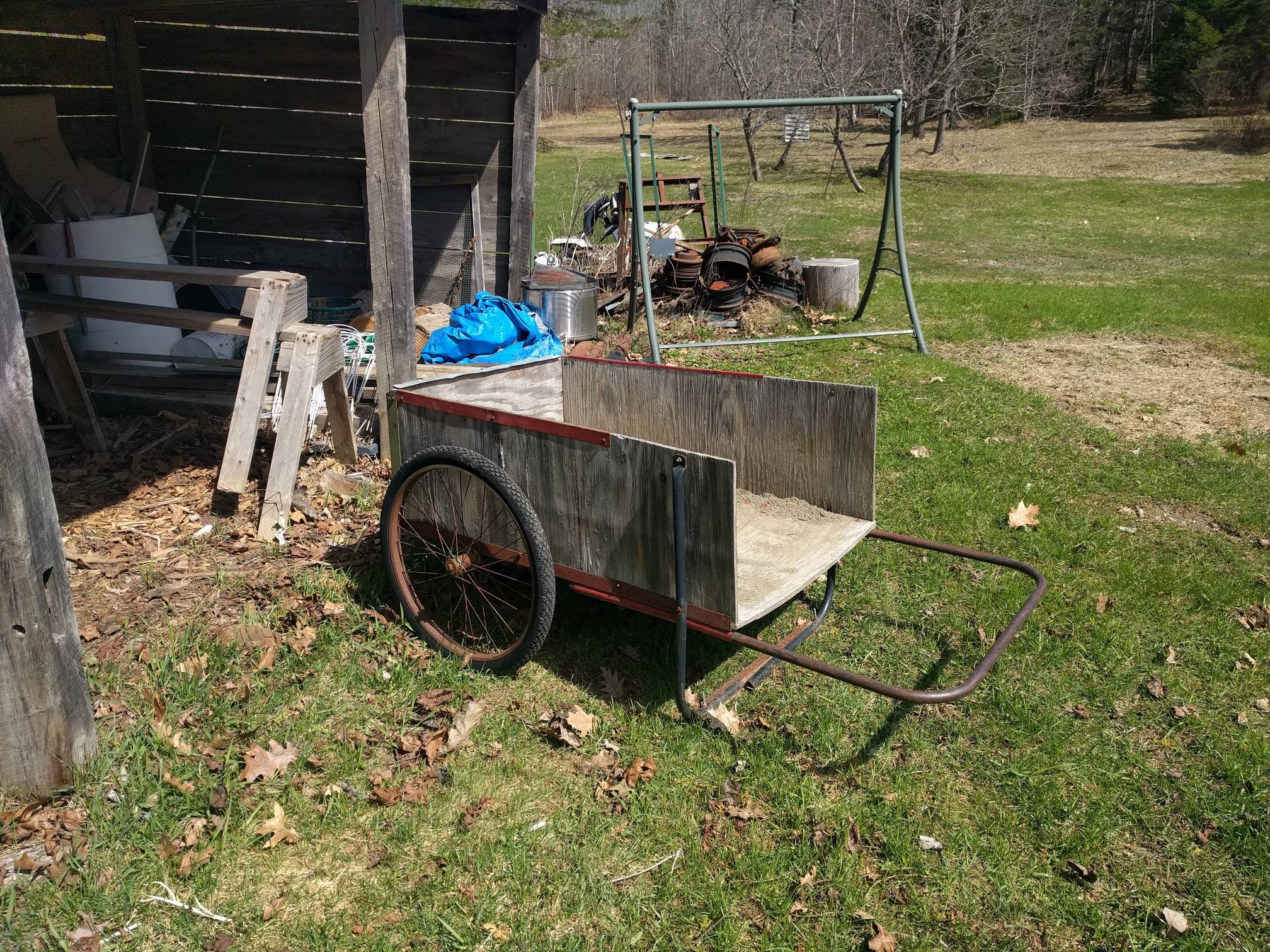 Here's something a little more custom using bike wheels on either side. I'm not sure if there's much of a base to start with or if my dad made it out of what old bike/metal scrap we had years ago. The front is also removable to make it easy to dump any loads. It can handle plenty of dirt but the problem is when it's near it's limit it's hard enough moving the thing. Good for large logs, brush, or rocks. It's done it's job and aside from creaking it's got plenty of life in it. 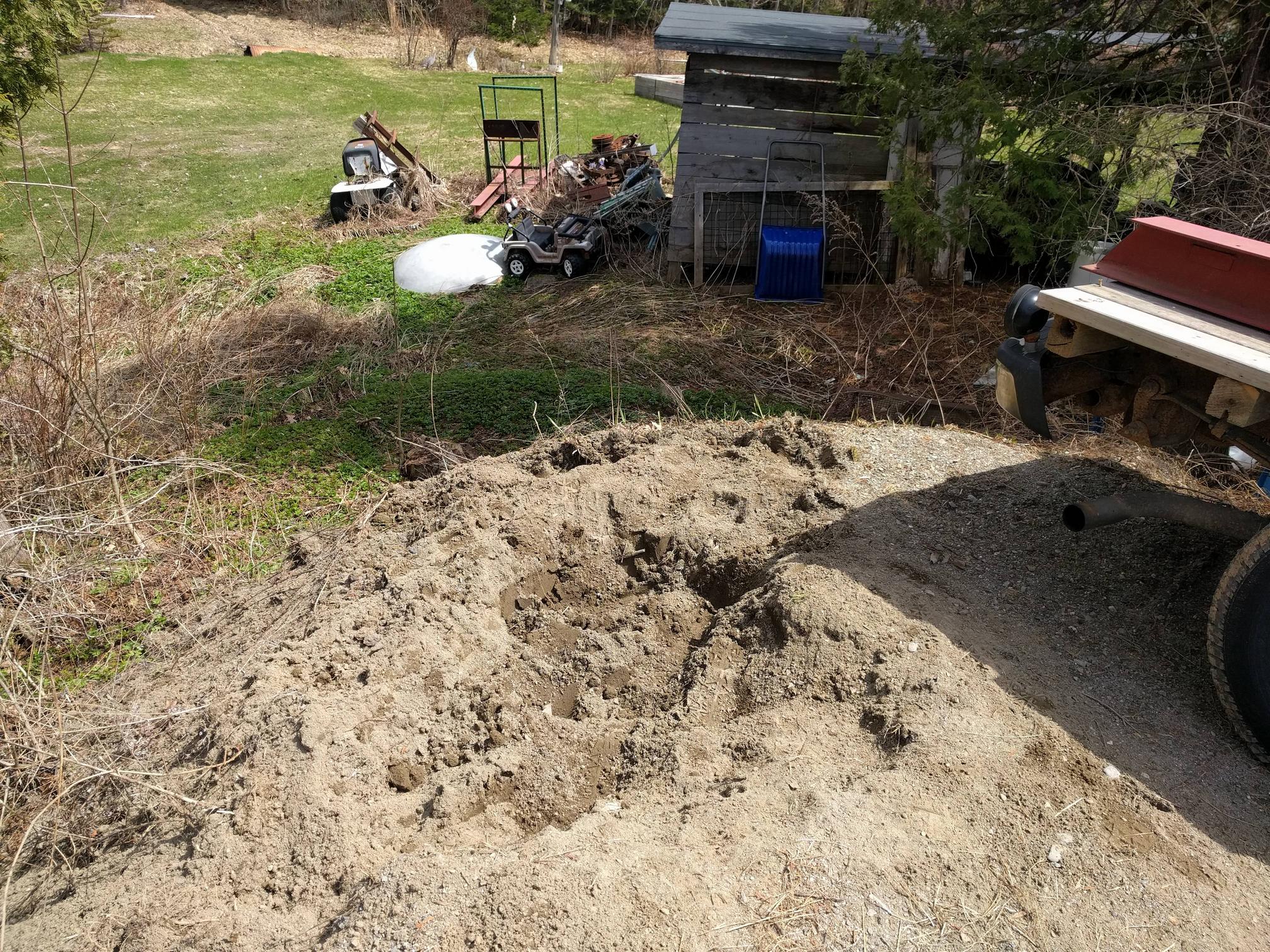 This isn't a tool but it's a hole that was dug one 5 gallon bucket at a time and moved within the three wheeled cart shown above. I'd have to say it's 15-20 bucket loads if not more.

That's a nice yard cart. I am going to put something like this together as well just for moving plants and tools around during the growing season.
Thanks for joining this great DIY Community and for sharing your work!